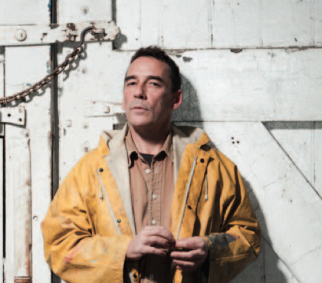 Although Glasgow, Scotland, in the ’90s was more known for either the winsome guitar pop of Teenage Fanclub and its many affiliated bands or the twee preciousness of Belle & Sebastian and their many affiliated bands, the Nectarine No. 9 were both of the scene and apart from it. Although the group recorded for the reactivated Postcard label, leader Davey Henderson shared little of the naïve pop sensibility of Postcard alums like Aztec Camera or Orange Juice, instead preferring a noisy guitar rock sound mixed with Captain Beefheart-style quirkiness.

The Nectarine No. 9, comprising Henderson on guitar and vocals, guitarist and keyboardist Simon Smeeton, bassist Iain Holford, and drummer John Thompson, formed in Glasgow in 1991.**

** Turns out this info is incorrect with the allocation of playing duties/responsibilites as well as missing out a further musician.  The members were Davy Henderson Vocs/Guitar, Simon Smeeton Guitar/Vocs, John Thompson Bass, Ian Holford Drums/Vocs & Occasional guitar/vocs, Todd Thompson Guitar…

Henderson, who had first gained attention as the leader of the avant-funk Fire Engines in 1980, and Smeeton had first played together in the underrated ’80s popsters Win. Their new group debuted with 1992’s A Sea With Three Stars, which was followed later the same year with the Unloaded for You EP. A nine-track compilation of various BBC sessions recorded in the first half of 1993 was released by Strange Fruit under the title Guitar Thieves. A 16-track summation of the first album and EP, Niagara Falls, was released in the U.S. and Canada in 1994.

That song turned up a third time on the Nectarine No. 9’s long-delayed second proper album, 1995’s Saint Jack. Even more dissonant than A Sea With Three Stars, Saint Jack also introduced a new fascination with electronic noise on a few tracks. After a tour with Henderson’s old mate Edwyn Collins, the group went underground for two full years before finally returning in 1997 as the backing group and co-writers on Scots poet Jock Scot’s album My Personal Culloden, which sounded like a cross between Ivor Cutler and John Cooper Clarke‘s albums with the Invisible Girls. The Nectarine No. 9’s third proper album, the puzzlingly-titled Fried for Blue Material, was released in 1998 on the Glasgow indie Creeping Bent, and included the group’s side of a 1997 split single with Suicide singer Alan Vega, “Port of Mars.”

The otherwise excellent and informative bio doesn’t give a full picture as the band released a further three albums:-

There were also a number of singles and EPs, many of them for Creeping Bent, whose founder and boss, Douglas Macintyre, still collaborates with Davey Henderson these days as part of The Sexual Objects, both in the studio and in the live setting.  Davey has also contributed guest vocals to material by Port Sulphur, another of groups in which the hard-working Mr. Macintyre is heavily involved.

Plenty of songs to choose from, and I was tempted to go with the Peel session version of ‘Don’t Worry Babe, You’re Not The Only One Awake’ to complement its appearance on Side B of the JAZF tape earlier in the week. But in the end, I’ve gone for a track that did appear as a 7″ single on the resurrected Postcard Records in 1994 and was the re-recorded for the album Saint Jack the following year.

mp3: The Nectarine No. 9 – This Arsehole’s Been Burned Too Many Times Before (single version)