A GUEST POSTING FROM MIKE MELVILLE 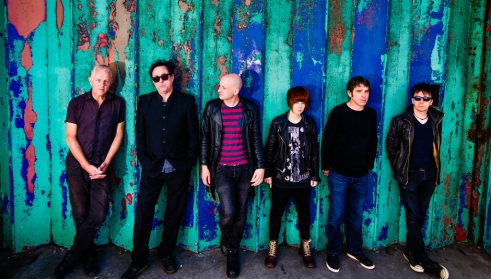 I’ve known Mike a long time – way longer than either of us have been doing this blogging nonsense. He’s both an talented writer and photographer and the fruits of his labours can be enjoyed over at the consistently excellent Manic Pop Thrills. This coming Sunday, he’s asked me to join him at the Glasgow gig by The Blue Aeroplanes. I had no hesitation in saying yes but did mention that outwith a handful of mp3s I knew little or nothing about the band. He decided that a quick education in the form of an ICA would be worthwhile. So over to Mike….

With a career stretching back almost 36 years, Bristol’s The Blue Aeroplanes have just released their twelfth studio album Welcome! Stranger.

Formed in the early 1980s, the band have had a rotating cast of members over the years (reaching 48 at the last count) with the only constants being Gerard Langley (vocals) and Wojtek Dmochowski (dance). Yep – dance. Long before Bez was shaking his thing for the Happy Mondays, Wojtek was enlivening the ‘planes live show.

Initially almost as much an art collective a band the Aeroplanes put out Bop Art on their own Party Records before signing for Fire for whom they delivered two further albums Tolerance and Spitting Out Miracles. By the time of  the latter the band were becoming firm critical favourites and the record brought them to the attention of both the major labels and, the ultimate critics band, R.E.M.

First off they supported the Athens, Georgia outfit on their Green tour in the U.K. Indeed my first exposure to the ‘planes was on that tour but it must constitute the briefest ever performance I’ve witnessed. We literally saw the last chord of the last song which was followed by what seemed to be dozens of folk (including some members of R.E.M.) leaving the stage. We definitely got the feeling that we’d missed something!

Which was unfortunate since we had wanted to see the Blue Aeroplanes but they must have been on stage much earlier than supports normally were at the Playhouse. That’s my excuse, anyhow.

The band’s fourth album (and major label debut) Swagger is widely regarded as their masterpiece and arrived on new label Ensign early in 1990. The R.E.M. connection continued when Michael Stipe provided backing vocals on What It Is on the album. (BTW the influence wasn’t all one way – listen to Departure and even E-Bow The Letter off New Adventures in Hi-Fi and join the dots!)

With the clout of a major behind them and uniformly positive support from the press the BAs genuinely appeared to be on the brink of a commercial breakthrough. Lead single Jacket Hangs reached 72 in the charts and follow-up And Stones (with several dance remixes) got as high as 63.

Although ‘Swagger’ failed to provide the breakthrough, Ensign still had high hopes for the follow-up. The band were persuaded to include a cover of Paul Simon’s The Boy In The Bubble on the new LP but even that failed to hit the charts. Parent album Beatsong did enter the charts at 33.

At this stage the Aeroplanes still seemed one great song away from making a breakthrough and they were prioritised by their American company. But the company were taken overshortly afterwards and the promised support never materialised.

Moving to Beggar’s Banquet, 1994’s Life Model reached 60 in the album charts but once again didn’t produce that elusive hit although lead track Broken & Mended really should have done so.

The following year came their second, and final, Beggar’s LP but Rough Music failed to make much of an impact.

Their next release was an odd thing on their own Art Songs label – the 2 CD set mixed new songs on CD1 (all entitled Cavaliers Part X) and compiled rarities (some of which had seen service as B-sides in the mid -90s) on CD2. Apparently all the Cavaliers were intended for Altitude as a 12 minute suite but gained a life of their own.

The band next rather unexpectedly signed to another major label – this time EMI. A patchy LP Altitude in 2006 was followed by a label-inspired album of covers of bands that had been on the Harvest label. Inevitably neither troubled the charts.

The re-release of first ‘Swagger’ then ‘Beatsongs’ in deluxe editions with tours to support raised the band’s profile again and the band’s next release arrived in 2011 – a self released vinyl LP Anti-Gravity with an expanded double CD version only released the following year. Unfortunately its impact was diminished by limited promotion.

The band set out in late 2013 on a Singles tour which included a Glasgow date – their first in Scotland since the ‘Altitude’ tour. The concept of a Singles tour was a little odd as there was no corresponding album to promote! Nevertheless the dates were a success with several new songs debuted.

Which pretty much brings us up to the release of the new album. The campaign for Welcome, Stranger’ seems to be far more focussed than that for‘Anti-Gravity as the album was launched as a pre-release through a Pledge Music campaign. A 14-date UK tour has also been arranged to coincide with the release on 6 January.

The album is their most direct in years with fewer long songs than normal and plenty of crunchy guitars. In Sweet Like Chocolate they’ve recorded their best pop tune in decades even if it’s not an original but a cover of a garage hit by Shanks & Bigfoot! But it’s fair to say the band have dramatically recast the song and made it their own.

So the Blue Aeroplanes once again appear poised for take-off with Gerard even raising the possibility of a new album later in the year.

Anyhow (finally) here’s a 10 track Blue Aeroplanes compilation. It’s not so much an attempt to cover the band’s whole career as to provide an accessible introduction to the band so there’s a good number of singles included.

And since it’s so new I’ve stayed clear from anything from ‘Welcome, Stranger!’, although to be honest, along with ‘Swagger’, the new album is probably as good an introduction to the band as you can get.

With its “Hello, how are you? How’s it going?” opening line B&M is a cracking way to open both its parent LP and this collection. One of the many ‘should have been hits’ in the back catalogue.

Probably their best known original song and the first BAs’ song I consciously heard. Expecting a faster tune, the song’s pacing is genius – slower than you expect but still unstoppable. It also has the distinction of never having been dropped from the live set.

‘Veils of Colour’ is a non-LP single which preceded their final album for Fire and it’s a song which must have really flagged up their potential to the majors. Along with most, if not all, of the non-LP Fire material ‘VoC’ is included on the ‘Friendloverplane’ compilation put out by Fire after the band signed to Ensign.

It’s a BAs’ tradition that Gerard doesn’t sing every song on the LPs so one of these songs also has to be included here. ‘Fun’ is Rodney Allen’s showcase from ‘Beatsongs’ and it was also released as a single in Europe.

Whilst I’ve stuck with the more obvious material the Blue Aeroplanes can be as experimental as the next band as ‘Bright Star Catalogue’ demonstrates. One of the best songs on the album it’s only a taster for the band’s longer material which is just as compelling as the pop tunes.

Another classic from the indie days which still features in live sets today, ‘Bury Your Love …’ incorporates both the band’s pop and experimental tendencies.

Lead track from an E.P. which never made a studio album although it is included on both the major label rarities compilation ‘Friendloverplane 2’ and the ‘Swagger’ reissue. Check out that riff! Despite lacking the additional promotion offered by an imminent LP release, ‘The Loved’ E.P. did chart – albeit at a lowly 91.

The lead single from the band’s second and final Beggars LP, ‘Detective Song’ was the latest in a run of classic singles but, sadly, another one which failed to trouble the charts. The fact that there doesn’t seem to be a promo on YouTube perhaps tells its own story.

Another Aeroplanes tradition has been the cover and over the years the band have covered a long list of acts including Wire, Deep Purple, The Smithereens, St. Vincent, CCR and the Hold Steady (who clearly owe a debt to Bristol’s finest). This was an early cover of a Tom Verlaine song which has become a live fixture as the final encore (and, yes, it was the “last-chord” song at the Playhouse gig!). There are at least 3 official live versions available which are all worth searching out.

Another classic ‘planes tradition is the great B-side. I have a playlist on the iPod of non-LP material from the major years which is as good as most of the albums. ‘Pony Boy’ is an out-take from ‘Beatsongs’ which Gerard has described as ‘never, really finished’. Which is more than a little scary as the version that was released is still great. Was even used to close the main portion of the live sets for a while and is available on both ‘Friendloverplane 2’ and the ‘Beatsongs’ deluxe reissue. (available here http://www.theblueaeroplanes.com/?product=beatsong-deluxe )

So that’s it. Want to find out more? The Aeroplanes’ web presence has been something of a moving target over the years but can currently be found at www.theblueaeroplanes.com

If you want a physical copy of the albums then the only officially still in print studio albums are ‘Cavaliers’, ‘Beat Songs deluxe’, ‘Anti-Gravity’ and, of course ‘Welcome Stranger’. See the band’s webstore for more details.However I think everything else is still available digitally and it isn’t too difficult to track down physical copies of the various studio albums and compilations if you are so inclined.

There’s also a couple of live CDs available from the band, ‘Live In Cheltenham’ and ‘Skyscrapers’, both of which I’d heartily recommend – particularly the latter for its epic 9 and a half minutes version of ‘Breaking In My Heart’.

16 thoughts on “AN IMAGINARY COMPILATION ALBUM : #105 : THE BLUE AEROPLANES”