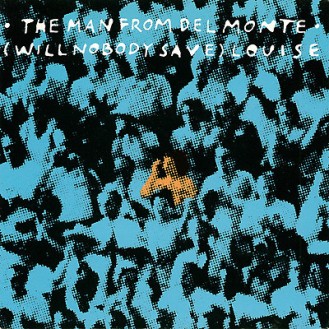 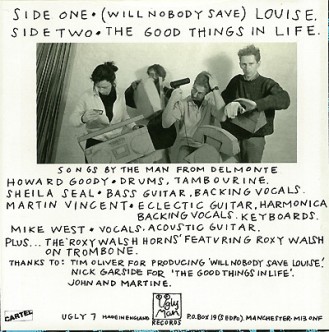 The double posting on The Desert Wolves late last week brought to my attention that The Man From Delmonte were another band who were on Ugly Man Records. I’ve a few of their tracks, mostly picked from compilations, with one 7″ single in the collection picked up second-hand a few years back. The a-side of the single was put into the C88 boxset by Cherry Red Records the other year with the accompanying booklet offering these words:-

Although a Manchester band, The Man From Delmonte (taking their name from a fruit juice ad) had more in common with the art world than the Manchester music scene as three of then had been painters or were involved in the gallery scene. Signed to Guy Lovelady’s influential Ugly Man label (responsible for early singles by Black and Elbow), the band debuted with the jaunty ‘Drive Drive Drive’. The more accomplished indie hit, ‘(Will Nobody Save) Louise’, was a loquacious, keening lament complete with brass interlude, that showcased guitarist Mike West’s fine song-writing talents.

And here is said single and b-side:-

The band actually released three singles on Ugly Man. These are the others:-

They then left the label to sign for Bop Cassettes for whom there was an EP with this being the lead track:-

mp3 : The Man From Delmonte – Waiting For Anne

Before a glorious farewell single, which I first heard years ago courtesy of a tape from Jacques the Kipper, which I’m convinced is their finest moment.

mp3 : The Man From Delmonte – My Love Is Like A Gift You Can’t Return

As I said last week, anyone who wants to fire over a guest post on a long-lost/forgotten singer or band, then please be my guest.