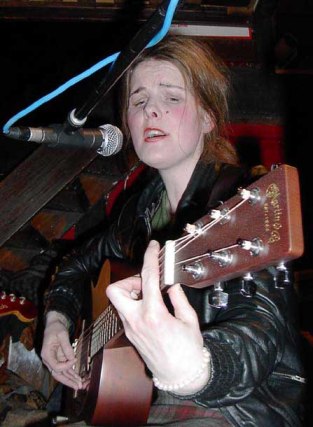 Monica Queen has been part of the music scene in Scotland for more than 25 years, initially through her involvement with the band Thrum, whose music was very much of the country-rock variety, inspired by a love of Neil Young.

Thrum spilt up in 1995 (although they would reform in 2011), and two years later Monica would record what is probably her best known vocal, when she duetted with Stuart Murdoch on Lazy Line Painter Jane, the stand-out and lead track on the second EP released by Belle and Sebastian.

Monica would, in later years, duet or perform with a number of other high profile acts including The Jayhawks, Grant Lee Buffalo, Shane MacGowan, and Snow Patrol. She was also known, if she was part of the audience, to accept invites to come on stage and assist with a song or two (as she did, to great effect, at a Martin Stephenson gig at a tiny venue in Glasgow many years ago).

There was a short-lived solo career, which included the 77x EP and Ten Sorrowful Mysteries album for Creeping Bent Records in 2001, and from which today’s song is taken:-