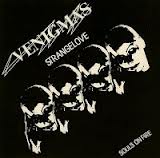 This contribution is from a mate of mine called Michael Donnelly.  For those of you who haven’t heard of this particular 45, the key to its inclusion might be in the final sentence:-

My pitch would be for Glasgow band Venigmas and their first single Strangelove, backed by Souls on Fire.

Came out in early 80s on the short lived Biba music label, pressed by Mayking Records and was produced by Tony Spath.

At the time of release, the band were :

Owen Paul( McGee) -guitar and lead vocals who would become a one hit pop wonder with My Favourite Waste of Time and brother to Brian McGee, original drummer with Simple Minds. Owen provided some backing vocals on some early Simps recordings and is still gigging as Owen Paul and recently was part of XSM (Ex Simple Minds) with Brian and Derek Forbes.

Martin Hanlin – drummer who later played with The Silencers and is now a producer in The States.

Michael Campbell – bass player from Coatbridge , founder member of Strasse from the Iron Burgh. Michael would give up a career in local government in Monklands to head south with the band to promote the single. Now works for South West Trains and keeps his hand in via a couple of tribute bands in West London. He is my main connection with the band and we remain close friends to this day. He was my best man in 1984 and was a star turn at the wedding reception in Airdrie.

By the time of the release, Frank (Fruit) O’Hare had left the band and would later hitch up with H20 back in Glasgow. (and later work with Mrs Villian briefly). Frank has been involved in a number of band projects in Glasgow over the years and is currently part of folk-rock outfit Celtic Fire.

The single was part of a package; The Venigmatic Principle…..There were 3 elements TVP1 (the record) TVP 2 (a VHS video) and third was an electronic version of both songs on a cassette. All 3 failed to catch the attention of the public and despite getting some airplay via Billy Sloan and Peter Powell ( the latter was part of the same management stable) the single did not chart. The band remained based in London and cut about the pub/club scene for a few years before they went their seperate ways. They played the Marquee, 100 Club and had a brief residency at the Half Moon in Herne Hill.