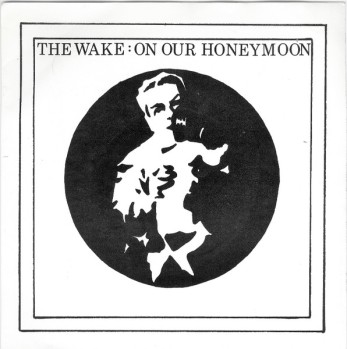 I’m able to bring this to you today, thanks to it having been part of the latest series of re-releases by Optic Nerve Recordings, a label specialising in offering up vinyl copies of long-lost or difficult to find singles, of an indie-bent, from the 80s and 90s.

The Wake were formed in Glasgow in 1981 by Gerard McInulty (aka Caesar), on guitar and vocals, Steven Allen on drums and Joe Donnelly as bassist. Previously Caesar had played with Altered Images, and was responsible for the superb Dead Pop Stars, but he left prior to the band enjoying chart success with Happy Birthday.

To begin with, nobody paid much attention to The Wake which led to the trio deciding, in 1982, to record a self-financed debut single on their own label, Scan 45 for which they roped in a friend, Robert Gillespie, to play on keyboards.

mp3: The Wake – On Our Honeymoon

The debut single and a demo tape found it way to Rob Gretton, who got the band down to Strawberry Studios in Stockport to record some material for a possible release on Factory Records.

The result was a seven-track LP, Harmony, issued in October 1982 with the catalogue number of FAC 60. It was the following year when I first really became aware of The Wake, thanks to them supporting New Order on a short tour across Scotland, during which I got to three of the gigs.  Later in the year, Bobby Gillespie would take his leave of the band, turning up next as drummer with Jesus and Mary Chain, being replaced by Alex McPherson.

The Wake would depart from Factory in 1988 and later releases would be on Sarah Records through to 1995, although the band was primarily now just Caesar and the Allen siblings, augmented on record by guest musicians.

The end of Sarah Records meant the end of The Wake, but they reformed in 2009 with new material emerging in 2012.

Going back to the debut single, it has long been out of print and copies tend to fetch £40-£60 on the second-hand market.  The Optic Nerve version is on white vinyl, for less than a tenner (plus postage), and comes with a poster and postcard.

Two tracks of their time, but sort of timeless, if you know what I mean.

The Wake were founded in Glasgow in 1981 by Gerard “Caesar” McInulty (formerly of Altered Images), Steven Allen (drums) and Joe Donnelly (bass), the latter soon replaced by Bobby Gillespie. Steven’s sister Carolyn Allen also joined on keyboards, and remained in the band thereafter.

The Wake released their first single on their own Scan 45 label, coupling together “On Our Honeymoon” and “Give Up”. This single eventually caught the attention of New Order manager Rob Gretton, who helped the band sign to Factory Records in 1982 and record an LP (Harmony) at Strawberry Studios in Stockport.

This was followed by a number of singles on Factory and its Belgian sister label Factory Benelux. In 1983, The Wake toured with New Order, and thus received critical attention but were often unfavourably compared to their more celebrated labelmates. Gillespie was asked to leave in 1983, subsequently playing drums with The Jesus and Mary Chain and achieving fame with his own band Primal Scream.

After an amicable but short-lived stint with Caesar’s ex-classmate Martin Cunning on bass , Alexander ‘Mac’ Macpherson permanently replaced Gillespie. That same year the band recorded a session on John Peel’s BBC Radio 1 programme. The band toured extensively and scored an indie hit with their 1984 single “Talk About The Past” which featured Vini Reilly of Durutti Column on piano.

The recording and release of their seminal 1985 album Here Comes Everybody marked the apex of their career. Further releases were few and far between: one more single “Of The Matter” emerged in 1985 before their last release for Factory, a 4-track EP entitled “Something That No One Else Could Bring” finally appeared in 1987.

In 1988, disillusioned with the lack of proper promotion and indeed apathy from Factory Records, The Wake left the label and signed to Bristol’s legendary Sarah Records, releasing two singles and two LPs, the last being 1994’s Tidal Wave of Hype. By this point, once again down to a three piece featuring McInulty, Allen and Steven, they also shared personnel with another Glasgow-based band on Sarah, The Orchids, with whom they had also played a few live gigs. When Sarah shut down in 1995, The Wake effectively dissolved.

In autumn 2009, The Wake (McInulty and Allen) came together once again to record a new album, “A Light Far Out”, but it wasn’t released till April 2012 on LTM Records In July 2013 The Wake performed at the Indietracks Festival.

I saw The Wake on a number of occasions back in the days including at least three support slots for New Order. They weren’t the easiest band to take to – they always looked and sounded so dour and miserable and at a time when The Smiths were taking the world by storm The Wake seemed very much out of touch.

I’ve picked up a second-hand 7″ copy of FAC 88, the aforementioned indie hit which featured Vini Reilly on piano:-