I sneaked out a couple of ICAs just before Xmas, which was a bit stupid of me as they may well have been missed by some of you who only pop in when from your place of employment or education. #200 was a further volume by myself on The Go-Betweens and can be found here, while #201 was an excellent debut offering from Phil H and featured The Wave Pictures, one of the UK’s most long-standing cult indie acts; click here to enjoy.

Today’s ICA is another first-time effort, from an American friend who wishes to contribute under the rather splendid name of Hyrbrid Soc Prof.  So without any further delay:-

That Band I Chose Not to See… FAIL

A GUEST POSTING by HYBRID SOC PROF, our Michigan Correspondent 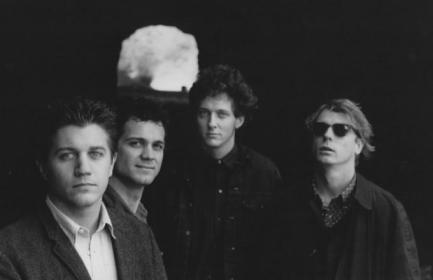 A lot of us have that one band we really wish we had gone to see when we had the chance… but didn’t. Thin White Rope is that band for me. It was the autumn of 1992 and my now-wife had taken a job in Cambridge, Massachusetts. Prepping to follow her East, I moved from Santa Cruz to Berkeley and was finishing my dissertation research from a tiny apartment on the Oakland border.

I’d wanted to see TWR since discovering them in 1988 when their label sent In the Spanish Cave to KZSC, the almost-freeform university radio station at UC Santa Cruz where I had a late night indie rock program. However, like most of the bands I’ve loved, Thin White Rope had a larger following and had more success touring Europe than the US, so they rarely played in the San Francisco Bay region.

In preparation for a global tour, TWR – from Davis, CA, 90 minutes east in the Central Valley – played the University of California student theater. I was really excited – I mean these guys were not only my favorite rip roaring guitar band but they’d performed naked at least once and, well, top that! – but I’d just gotten back from a trip to California’s Imperial Valley, had a ton of interviews to transcribe, needed to be able to get to the archives with a clear mind and was worried about getting all the things I needed to get done before moving completed. So I didn’t go.

They broke up after that tour.

Some time in the mid-80s, I’d read a review by Robert Palmer in the New York Times – I can’t remember the band being assessed – and in that review Palmer described a number of groups with twin lead guitars who, to his mind, all secretly wanted to be Television. They wanted to make their own Marquee Moon. If Palmer wasn’t writing about Thin White Rope, he could have been (If Wikipedia is any guide, The Rough Guide to Rock agreed with this reading of the band…) There are a number of great examples of this but, while it’s not here on this list because the live version – that is here – is even better, Take it Home (Long Version) off of Moonhead (1987) remains one of the songs I blast loudest in the car or in the living room (when no one’s home).

While they seriously chafed at being called “Desert Rock” (there’s not a darned thing “desert” about Davis, or associated with LA’s Paisley Undergound (there’s very little retro-60s about the band), these categories sorta work as descriptors. There’s definitely independent, if not outlaw, country in the music, but the Stooges are in there as much as Television. I think, long before Joe Banks’ 30 year retrospective review of It’s OK (included here) from In the Spanish Cave brilliantly describes the experience I had of the band:

It starts with those guitars again, weaving around each other like a distant fire on the horizon, slowly fading up, approaching, getting near, and then… JESUS CHRIST ALMIGHTY, what in God’s name is that? It’s the opening riff of ‘It’s OK’, spewed forth with one of the dirtiest, ripped-from-the-bowels-of-hell guitar sounds ever. There’s a pounding drum roll, and then we’re off on a throbbing, trance-inducing, space-rocking ride that still brings the hairs up on the back of the neck.

I didn’t find out that they’d broken up until I was in a Newbury Comics store in Nashua, New Hampshire, and came across the double CD, The One that Got Away, a recording of their last show in Ghent. I was furious with myself… and then blown away by the CDs, and then more furious with myself.

Guy Kuyser, lead singer and guitarist, is now working as a PhD soil scientist. He was in the short-lived band, The Mummydogs for an album before giving up music completely. My favorite of their songs is Paul of the Jungle. Roger Kunkel, the other lead guitarist, helped form Acme Rocket Quartet, and they recorded two records. Neither, sadly, did much for me.