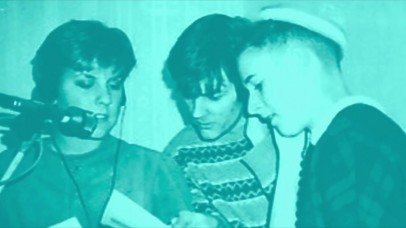 The heading of today’s post are words attributed to Everett True, a UK music journalist (among many other things) of some note, when he speaking in 2008 about 80s indie outfit Trixie’s Big Red Motorbike, a band to whom I made passing reference in this posting about Twa Toots, back in November 2017.

I only knew of Trixie’s Big Red Motorbike (from here-on in to be referred to simply as TBRM) back in the day from seeing it in print in one or more of the UK weekly music papers. I may have come across some of their music via John Peel shows, but I can’t be 100% sure. It’s unusual in many ways as I shared a flat for 12 months with someone who had the largest collection of indie singles and albums in its day, much of which I collected initially via cassettes and ultimately in many cases purchasing the vinyl. He didn’t have anything by TBRB in his collection and thus neither did I.

It’s only the best part of 40 years later that you can find a reasonable explanation why folk in Glasgow didn’t own anything, thanks to the info that’s been put there on t’internet.

Turns out TBRM were a duo consisting of siblings Mark and Melanie Litten, forming in 1981 when he was a telephone technician and she was in sixth-form at school (which will make her ages or thereabouts with me!). They lived on the Isle of Wight, just off the south coast of England, and which is home to occasional TVV contributor, Jules B. (I’m wondering Jules, if you grew up on the island, whether you knew either of the Littens?).

Anyways, TBRM were very much at the forefront of DIY-music, recording their songs in a box-room within their home, issuing them in limited numbers with photocopied sleeves and sending them out via post. It’s an operation which makes the likes of Postcard appear conglomerate and corporate.

This was both sides of the debut 45, released in mid-1982 on their very own Chew Records:-

Now, I know what you’re thinking……amateurish and coy beyond words….but this is exactly the sort of stuff my flatmate feasted on and I’m sure he would have wanted a copy. Indeed, it may well be that he tried to get his hands on one, but there were only 100 pressed up, the only record ever released by Chew. Its rarity means it is valuable and the one copy on Discogs has an asking price of £700.

A copy will be sitting somewhere in the vaults of a late and much missed DJ, as it was sent to John Peel, who not only played it but had them come to London and record a session which was recorded in July 1982 and broadcast the following month.

The duo would wait until the following year before releasing a follow-up the appropriately and accurately named 5 Songs EP, and included this so twee it is ridiculously beyond twee effort:-

The EP, which I understand was recorded in Portsmouth,  again had a very limited run and right now, there’s no copies for sale on Discogs!

After this, they got all rock’n’roll lifestyle, thanks to a friendship with Jane Fox of Marine Girls, who joined them for a second John Peel session in August 1983 and later on for a recording session in a professional studio on the Isle of Wight, the fruits of which proved to be a shared flexidisc and a 7” single which sold enough copies to reach the giddy heights of #29 in the UK indie Charts in late 1983:-

Again, no copies currently for sale……

The following year, TBRM provided two new songs for Feet On The Street, a compilation album featuring singers and bands from the Isle of Wight before a couple more tracks, recorded in the home studio, found their way onto a German compilation cassette in 1986 by which time they had disbanded, with Melanie moving off the island.

Just about everything was gathered up and issued on a vinyl LP ‘The Intimate Sound of Trixie’s Big Red Motorbike’ in 1995 and that was it until 2012, at which point the band reformed!!!

An interview was given to the Penny Black Music website in October 2012 during which Mark Litten revealed he was now performing the songs but with his daughter Jane on vocals and instrumentation (Jane was 15 years old when he gave the interview). He had also worked on the release ‘All Day Long In Bliss’, a new digitial compilation for download on Bandcamp comprising 18 tracks, some of which were demos and others had been previously unavailable, the purchase of which allows the printing of a CD sleeve and a 20-page booklet with liner notes and photos. Click here to purchase.

And that, unless anyone has any comments to add, will likely be the first and last time TRBM appear on T(n)VV.