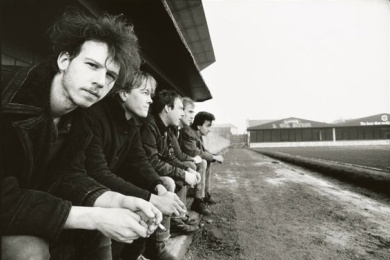 The contents of this online review of the most recent Half Man Half Biscuit LP captures it all so perfectly:-

If Half Man Half Biscuit did not exist, it would be imperative to invent them. Since their formation nearly 30 years ago, their presence has been a necessity. In essence the vehicle for the observations, ramblings and creations of frontman Nigel Blackwell, they are a counterblast to the processes of modern life. Throughout changing times they have spanned the decades, released 12 full-length albums and dropped a thousand-and-one pop culture references; from BBC Radio’s Charles Nove to former England cricketer Fred Titmus.

Their approach to promoting their music is famously non-existent – a handful of UK gigs each year is normal. Even rarer are interviews of any kind. Blackwell himself states his biggest achievement, as “creating a situation for myself whereby I can get up of a morning and decide to go and tackle Bwlch Pen Barras on the bike, […] rather than report to a superior to await orders”. Their existence is somehow outside of the modern world, yet also a reaction to it. Merely by continuing to release and perform, Half Man Half Biscuit serve a greater purpose – to rally against the crap that life throws up with a wry smile, and also to take joy in life’s small and simple pleasures.

There have always been lessons to be learned from Blackwell’s timeless wit and wisdom. Some remain relevant after all these years. For views on pedestrian etiquette, see ‘National Shite Day’ and ‘L’enfer C’est Les Autres’. For a creepily accurate character assassination of Jimmy Savile see ‘I Left My Heart In Papworth General’, released all the way back in 1985. A few pearls can be found in these 13 tracks, too. The stand-out line this time is the following from ‘This One’s For Now’: “The greatest surface under foot is springy turf / Why does the winner of Mr Universe always come from earth?”. There are too many challengers to mention many more.

Going through their career in a box – incorrectly – labelled “comedy” has meant that HMHB have been often misunderstood and under-appreciated. There are, naturally, comedic elements but this is far from music for the sake of laughs and the humour is almost always dark. Satire is a strong word, but what they practice is, in a way, a satirical look at life – of the everyday, the mundane, mildly irritating and outright absurd.

I’ve recently been listening a lot of HMHB on my way to and from work. It’s the time of year when you set off to work and then return home in the cold and the dark so you need something to bring a smile to your face and make the journeys that bit more bearable. The thing is, I wasn’t sure whether or not to include them within this series, at this point anyway, as I’ve never quite got round to buying all of their albums – I have seven LPs (but none since 2008’s CSI Ambleside), two EPs and four singles in the collection – but then I thought to hell with it. I’ll make do with a ten-song compilation from the tracks I do own and think of it as my soundtrack for the winter of 14/15:-

As much as I had loved the debut LP Back In The D.H.S.S. I wasn’t sure if the band were really up to it. I hadn’t seen or heard them play live and I feared they would be a tuneless shambles. And then one night they appeared on my TV screen via The Whistle Test on BBC2 where they performed tracks from their new EP.

They were absolutely magnificent and my doubts were vanquished.

This is perhaps the quintessential HMHB song.  Trumpton, for those who might not know, was an imaginary town that featured in a children’s TV show animation from the late 60s. There had only been 13 episodes but they were on constant repeat and so they were ingrained in many a person’s pysche. But it took the genius of Nigel Blackwell to take the social disorder happening on the streets of the UK (and captured perfectly on Ghost Town by The Specials) and imagine it happening in Trumpton.

I’ve gone for the Peel Session from 1986 as it is a bit more manic sounding than the EP version and is closer in tone and sound to that unforgettable Whistle Test performance.

2. I Was A Teenage Armchair Honved Fan

A cracking indie tune backed by a lyric that namechecks an obscure Hungarian football team, and then comes up with a pretentiously marvellous couplet for making toast:-

It then takes the piss out of rock band clichés before closing out with an extended repeat of the song’s ultra catchy one-line chorus.  From the LP Back Again in The D.H.S.S. (1987)

Twenty plus years on from the debut material and they still have the ability to make me laugh out loud with brilliant lyrics.  New age mum has divorced ordinary bloke dad….but he will use the kids to get his revenge!!   Not once…but twice!!!!

And the closing line of the song….while having nothing to do with the rest of the lyric…is just observational comedy of the highest quality.

The sacred gods of the indie congnoscenti are not immune from Nigel’s wit as evidenced from this  very very funny and very very very sing-along tune from a 2005 album they had the wit to call Achtung Bono.

Feel free to join in.

David Gedge may be the author of the best break-up songs in the indie music canon but even he hasn’t come up with the sheer misery and heartache of this track from the Trumpton Riots EP. Six months after broken-hearted bloke has returned her brown anorak he is still suffering nightmares and on the edge of a psychotic breakdown from her failure to return his pin-up of the Russian goalkeeper that many football fans reckon was the world’s best ever.

1. Time Flies By (When You’re The Driver Of A Train)

Chigley was the follow-up series to Trumpton, again with just 13 episodes.  One of the episodes featured a train journey complete with songs, perhaps in homage to the kids series Casey Jones.  Here’s the lyrics:-

Time flies by when I’m the driver of a train
And I ride on the footplate, there and back again.
Under bridges, over bridges, to our destination
Puffing through the countryside there’s so much to be seen;
Passengers waving as we steam through a station,
Stoke up, fireman, for the signal is at green:

Time flies by when I’m the driver of a train
And I ride on the footplate, there and back again.
In the cutting, through the tunnel,
Rushing, clanking, on the track;
Wheezing pistons, smoking funnels,
Turning wheels go clickety-clack:

Time flies by when I’m the driver of a train
And I ride on the footplate, there and back again.

HMHB’s version isn’t quite as romantic with its suggestion of the train driver being a drug addict!!:-

Time flies by when you’re a driver of a train
Speeding out of Trumpton with a cargo of cocaine
I get high when I’m the pilot of a plane
Touching down at Camberwick I’m stoned out of my brain
Under bridges, over bridges to our destination
Careful with that spliff, Eugene, it causes condensation

Every Saturday I get the Chigley Skins
And they always smash my windows cos the home side always wins
Yeah time flies by when you’re a driver of a train
Gonna get these syringes out and crank up once again
Under bridges, over bridges to our destination
Careful with that spliff, Eugene, it causes condensation

One of the standouts on a quite brilliant debut LP

An unreleased track that has only ever featured in a Peel Session back in 1995 and quite simply the best ever tribute to The Birthday Party that has been ever written and recorded.

I wonder what Saint Nick made of it?

Time to slow things down a little….and here’s some stand-up comedy, set to a folk tune, featuring the tale of someone turning up to buy things from the night-shift staff member at the filling station.  We’ve all done it haven’t we???

From the 2000 LP Trouble Over Bridgewater

Summing up in under 100 seconds everything that was and remains wrong with sports broadcasting in the UK.  For the most part, ex-players do not make the best pundits.  Cracking wee tune to boot.

Lead track from the Editor’s Recommendation EP of 2001

Most HMHB tracks are of the short and sharp variety, so this, the closing track from C.S.I. Ambleside which clocks in at almost six and a half minutes, has to be regarded as epic.  It is an extended rant of what it is about modern society that pisses Nigel off set to a tune that thirty years ago you’d probably never imagined the band being capable of recording and playing.