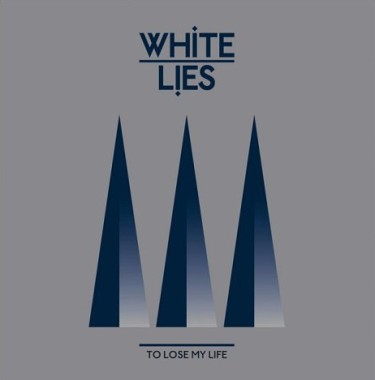 The traffic to the blog slows up over the Festive period, and it’s therefore something of an opportunity to take a bit of a breather.

Over a period of 26 days, I’ll be posting a single never previously featured on its own before – it might have sneaked in as part of an ICA or within a piece looking at various tracks – with the idea of an edited cut’n’paste from somewhere (most likely wiki) and then all the songs from either the vinyl or CD.

T is for To Lose My Life released by White Lies as a single in January 2009.

White Lies burst onto the scene in 2008, one of those bands who get hyped all over the media on the back of some journalists having caught them at a gig and prior to any music being available to buy.  This is normally a recipe for disaster, but for once the music did just about live up to expectations, although there was, by the time the debut album hit the shops, the inevitable backlash.

Harry McVeigh (lead vocals, guitar), Charles Cave (bass guitar and backing vocals), and Jack Lawrence-Brown (drums) had been performing together since their late teens, initially under the name Fear of Flying. A couple of singles, produced by uber-producer Stephen Street, as well as some high-profile support slots on UK tours, hadn’t generated much success, and so the trio decided to have a serious rethink, choosing to ditch the name and to move to a darker, less pop-orientated sound.

The best part of five months was spent on refining and rehearsing, but all the while demos were being put out across various social media channels to generate a buzz. The extent to which it worked can be seen from Zane Lowe of BBC Radio 1 naming their song Death as ‘the hottest in the world‘ in early February 2008, despite it not having been released; in fact White Lies didn’t even have a record label and weren’t scheduled to make their live debut until 28 February 2008.

Within days of that debut, there were numerous offers on the table, with the band deciding to go with Fiction Records, part of the Universal Music empire. They were also added to a nationwide tour being promoted by the NME and by the end of May 2008, had also appeared on television, playing two songs on Later With Jools Holland on BBC2.

The deal with Fiction allowed for a small indie label to release the band’s debut single, Unfinished Business, on a limited edition 7″ vinyl. The debut for their new label was Death, the song hyped up many months earlier), and it only reached #52 in September 2008. Its follow-up would wait until January 2009, just a week before the debut album hit the shops:-

It would only enter the charts #34, and drop down immediately, but as if to show that hit singles were no longer all that important in the grand scheme of things, the album, which was also called To Lose My Life, entered the charts at #1 the following week.  The critics, however, were no longer fawning over White Lies now that they were no longer a secret.

The single was issued onto separate 7″ vinyl records as well as a CD.  I’ve got your CD b-side on offer

The band is still going strong with a sixth studio album scheduled for a release later this year, supported by thirteen shows across the UK/Ireland in March and a very extensive 35-date trek around France, Belgium, Germany, the Netherlands, Denmark, Sweden, Finland, Poland, Czech Republic, Austria, Italy, Spain and Portugal between 4 April and 25 May.

I like my 80s synth-pop and I like bands who pay tribute to it in exciting and innovative ways. I was therefore keen to give Singles by Future Islands a try given most reviews upon its release as well as reviews of music in 2014 raved about it.

The first time I ever heard of Future Islands, despite this release being their fourth studio album, was when they featured in a guest posting from S-WC back in April 2014. He was looking at bands whose name began with the letter F and he wrote this:-

Talking of great records, a few weeks ago Future Islands released Seasons (Waiting on You), which is right now holding firm as the best record I have heard this year. Yup better than Happy by Pharrell Williams.

Just after the release of their fourth album Singles the band were invited on to the Letterman Show and there they played ‘Seasons’ and delivered a performance so staggering, so jaw droppingly fucking magnificent that all of a sudden a big secret had been let out of the bag. Put ‘Future Islands Letterman’ into a search engine and you will understand.

I took SW-Cs advice. There is no argument from me that it is one of the most spellbinding things, from a musical context, that I’ve ever seen as part of a TV programme.

Later on in the year, Aldo caught Future Islands playing live in Glasgow and included Seasons (Waiting On You) as one of the tracks to go with his review-of-the-year piece. And so, I was very happy when in a mainstream record store last week (tracking down a DVD boxset on sale) to spot that Singles could be bought for just £5.

The record open with Seasons. It is a beguiling and interesting opening. As the live clip demonstrates, Samuel T Herring croons, swoops and growls his way above a tune that is very atypical of some of the very best synth-pop bands of the 80s. I really do like Seasons…..it’s a cracking bit of music while the vocal has you dredging your memory banks to come up with a comparator but in the end you conclude that he is unique, although the one name I couldn’t shift out of my head was Cee Lo Green.

The next song to come out of the speakers is Spirit which musically struck me as a cross between Vince Clarke era Depeche Mode and OMD but which vocally annoyed the hell out of me without me really being able to explain why. Come track 4 on the CD and I’d got it…Herring reminded far too often of the vocal gymnastics performed by Mick Hucknall’s MOR pap when the record buying public went crazy for them.

In short…other than the opening track, this record is a real letdown bar one or two snippets of music that were interesting – Light House (track 7) has some nifty guitar work reminiscent of New Order on their early 80s albums. I accept that it would be near impossible to maintain the high expectations from the opener but the sad thing is none of the other nine songs really come remotely close. I just found it really boring and unmemorable. I thought back to A Flock of Seagulls who had one great single and very little to back it up – but we found ourselves more than three decades ago noticing them and talking cos the frontman had a great and strange haircut while today we have noticed and are talking about Future Islands cos the frontman does crazy wee dances and is passionate about his vocal delivery in a live setting.

Maybe my expectations going in were too high but I found the record to be no more exciting than any new record by Coldplay and I am at a loss to understand why so many folk are creaming their underwear over something so lifeless, dull and dreary. When the record ended I just felt it had consisted of one of two constant and repetitive drum and synth beats – either uptempo groove or even worse lumpen slow stuff which would be a great cute for insomnia.

Singles has had folk raving about in throughout 2014 but I reckon come 2016 most folk will look back on their fawning reviews and be embarrassed.

I very rarely use this blog to pen negative stuff – if I’m not a fan I prefer to say nothing at all. There’s plenty of vinyl and CD in the collection that I haven’t ever mentioned this past eight and a bit years for that very reason. But given this is a time when I seem to be so out of sync – you’ll struggle to find anywhere a bad word said about this record – I’m going to make an exception.

As I said at the outset, I really do like my 80s synth-pop and I like bands who pay tribute to it in exciting and innovative ways. Future Islands, on this showing, do no such thing.