Your “So Michigan Calls THIS Spring?” Correspondent
The Hybrid Soc Prof 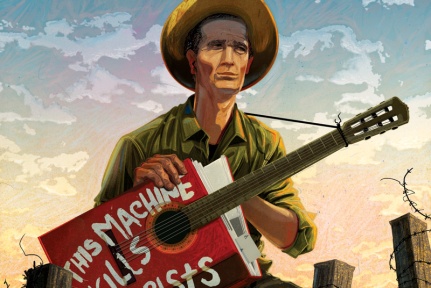 I considered a long, rambling account of
• my frustrations around hearing great Billy Bragg singles in the 80s but not being able to find his LPs,
• seeing the Beatnigs/Disposable Heroes of Hiphoprisy when Camper van Beethoven had to cancel a show for which I had tickets,
• the connection between Bragg and the Disposable Heroes initiated at the celebration of the 80th anniversary of Woody Guthrie’s birth – realized in a performance of “Vigilante Man,”
• the way that performance led Nora Guthrie to open up Woody’s archives to Bragg as a means to set to music songs Woody had only written lyrics for,
• Bragg’s invitation to Wilco (and Natalie Merchant) to join the project, and
• the eventual generation of what is now the three CD/album set, Mermaid Avenue.

This was going to be followed by a look at the more recent New Multitudes double album by Will Johnson, Jim James, Jay Farrar and Anders Parker (set in motion and organized by Farrar) where I would
• look askance at Farrar’s claims that he was contacted by Bragg before Wilco while claiming to be uncomfortable with the idea of a collaboration,
• call bullshit on his assertion that he never listed to the Mermaid Avenue albums – or, at least, that he didn’t listen to them to keep form being influenced, and
• acknowledge that, despite all this, I like New Multitudes a little better than Mermaid Avenue.

All that would have taken too long, classic Hybrid Soc Prof tl;dr…

There have been two other recordings of songs from Guthrie’s archives… one by the folk/jazz artist Jonatha Brook (yes, Jonatha) and another by a Native American “alternative” band, Blackfire. Neither are my cup of tea. By contrast, the New Multitudes and Mermaid Avenue collaborations make me really happy.

As many people – from performers to reviewers to me – have noted, what people who think they know Woody Guthrie songs aren’t always expecting is the sheer amount of love, sex and drugs… it’s almost like people did those things before the 60s (the sociologist writes shaking his head…)!

I tried somewhere between five and nine – depending on how you count such things – different approaches to selecting and ordering songs from these collections and I always ended up losing songs I wasn’t willing to cut. In the end, I opted for alternating selections from each set. It’s imperfect (I left out Natalie Merchant for goodness sake!), but in the end I’m quite happy with it. Enjoy.

One thought on “AN IMAGINARY COMPILATION ALBUM : #245 : WOODY GUTHRIE REVISITATIONS”