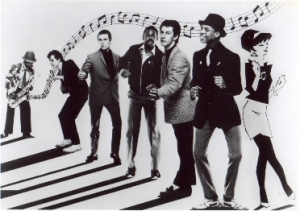 Being 50 gives a certain….perspective; so here’s mine.

Taken from the (still) stunning first Beat album’ this dates from 1980. Thatcher was just beginning to bite and the major riots were a distance away.

The great threat; as seen by the Left was of the National Front. The broad alliance against them has been well documented. On one level; the song seems a simple anti-Nazi one (“even though that cunt’s a Nazi”); but a deeper listen shows a more nuanced approach, with an appeal to accept the brotherhood of all.

Very much of its time; but still a worthwhile sentiment today.

On broader terms, there appears to be much written from our generation about the absence of modern protest songs. I feel that this shows a much deeper cultural shift. In the 80’s you could SEE and hear opposition. Now debate is so strangled that no dissenting voices are allowed. This pushes dissent far deeper than mere radio airplay. Democracy grew as a useful way for the rulers to see dissent; being able to see none should worry them greatly.

This is a fantastic song that I’d long forgotten so big thanks to Adrian for his posting.  He says it is very much of its time and yet it’s one that more than thirty years has a crispness and sound that is still hugely enjoyable to listen to.

Everyone recalls the role The Specials played in raising political awareness in the re-birth of ska in the UK at the beginning of the 80s but the likes of The Beat and The Selector also played a huge and important part.  Thanks again Adrian.