An example of the blogging fraternity in action. From 19th March 2007:- 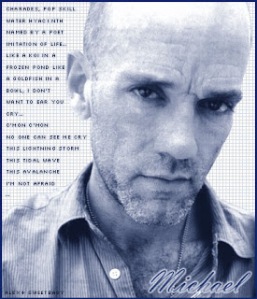 Among my CD collection is a compilation, released in 1995, that I picked-up second-hand. It’s called A Flavour of the Label 4, and it seems to be a promo for acts who recorded, at that time, for Capitol Records and EMI Records.

I’ve heard of most of the acts on the CD, which include Supergrass, Foo Fighters, Blur, Radiohead and EMF. However, the 14th and final track is a total mystery:-

Now to make it quite clear, its someone called P singing a song called Michael Stipe. Not the other way around. The scant information for the track says:-

Can anyone supply anything more?

JC
aka The Vinyl Villain

The replies were numerous and very prompt.  Within just an hour I had learned that P consisted of:-

I also discovered that an LP had been released on Capitol Records in 1995.  It included this cover version:-