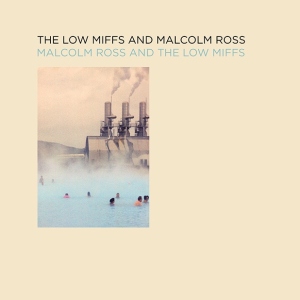 The Low Miffs are from Glasgow and they make the sort of intelligent, catchy but different guitar-pop that has always found such favour with your humble scribe.  Oh and there’s the bonus that lead singer, Leo Condie, has a vocal delivery that can be eerily reminiscent of the late, great Billy Mackenzie.

In 2009, the band teamed up with the legendary Malcolm Ross and released an album of 8 perfectly constructed songs that should have sold by the barrowload.  Don’t just taken my word for it….this is from the pages of one of Scotland’s main newspapers:-

Malcolm Ross was the musical mercury of Postcard Records’ Sound Of Young Scotland, flowing smoothly from Josef K to Orange Juice and Aztec Camera. This collaboration with Glasgow young guns The Low Miffs raises the temperature to that of those heady times.

Dear Josephine, with gymnastic vocals from Low Miff Leo Condie, and a guitar break to turn your face inside out, reinvigorates that old jingly jangly motif, while also injecting genuine joie de vivre to the opening Cressida.

Featuring some quite brilliantly controlled playing weaving lovely patterns around singing that is part Associates, part Sparks, this is sonic sunshine to light up the darkest room.

Ross is a revelation, delivering a smoky understated vocal on the quiet menace of The Back Midnight, a jazzy walk on the wild side with a Tarantino twang. Mankind is a bit of a rock and roll cabaret wafting up the steps from a Belgian basement, a staggering waltz with gruff saxophone and sharp snappy lyrics that crackle like a long-lost Alex Harvey tune. With added drama, if you can imagine such a thing.

More jaunty is The Man Who Took On Love (And Won), with the lovely line “Love’s last reserves are more than I deserve”. Best of all is the strutting swagger of Kind Of Keen, big on eerily atmospheric keyboards adorning a road song at the junction of Highway 51 and the M8.

One of the best tracks on the album was given a download release in advance of the actual LP hitting the shops.  I suppose in the modern era that counts as a single, but my rule of thumb for the on-going Saturday series is that I must have a vinyl or CD copy of the 45.  It seems criminal not to air it:-

mp3 : The Low Miffs and Malcolm Ross – The Man Who Took On Love (And Won)

I can’t recommend this LP enough.  It’s available for a ridiculously low prize on the band’s bandcamp page here.