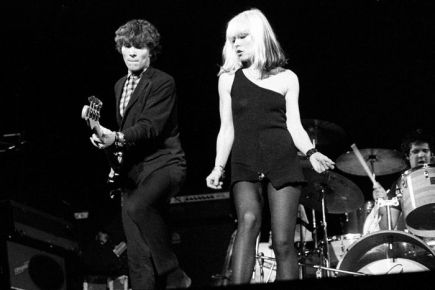 This is a very lazy posting in that I’m lifting the words used to describe a song in and ICA. But in my defence, the words that were used are more than capable of offering up a stand-alone post. Plus, I get to add some stats and facts and post the b-side:-

Gary Valentine is one of the unsung heroes of the Blondie story. He wasn’t the original bass player – that honour went to Fred Smith but he had jumped ship (understandably) when he was asked to join Television after Richard Hell had departed following one too many arguments with Tom Verlaine. Gary Valentine soon immersed himself fully with Blondie, adopting a look the band wanted and contributing a number of full-fledged tunes, including X-Offender which, with a Debbie Harry composed lyric, became the first ever 45. Another of his compositions, (I’m Always Touched by Your) Presence, Dear was chosen as the follow-up to Denis, and provide the band with its second successive Top Ten hit in the UK. The irony of this was that he had already left Blondie, frustrated in part by an unwillingness to record more of his songs, to be replaced by Nigel Harrison who was there all the way as the stellar ride to stardom gained momentum. He would later, in the 1990s after a move to London, pursue a fairly successful writing career, under his real name of Gary Lachman.

Presence is a fantastic love song, written for his girlfriend of the time on the back of them, despite often being thousands of miles apart while he was touring, having similar types of dreams of an evening, a situation that led him to pen what I’ve long thought as being one of the band’s finest ever moments.

Now the stats and facts.

It was released on 7” and 12” vinyl, selling enough copies to reach #10 in the UK singles charts. I’ve long had a copy of the 12” version, but in this instance it wouldn’t have mattered if I’d gone with the 7” as there was no extended version of the A-side and both bits of plastic offered up two songs on the B-side:-

The former, a Jimmy Destri/Chris Stein co-effort, had already been made available on the album Plastic Letters. The latter, which was written solely by Jimmy Destri, was otherwise unavailable, albeit it would be included as part of the bonus material on later re-releases of the album.

My own bonus offering comes in the form of a solo version of the single, released by its composer, back in 2003:-