A GUEST POSTING by MR. ED 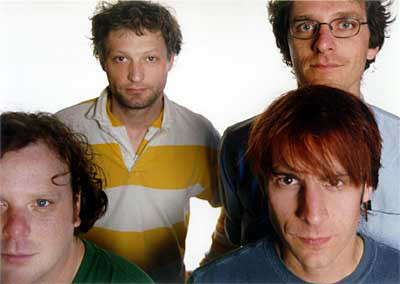 An opening apology from JC

I have a rule of thumb that ICAs should be restricted to one per week given that they trend to be slightly longer pieces than usual, added to the fact that there will be upwards of ten songs to take in.

I’ve already explained that the Pylon ICA posted just 48 hours prior to this should have featured months ago.  I really should have kept this latest one back for a few more days, but as it’s from a new contributor, certainly in this little corner of t’internet, my preference was to share it sooner rather than later in the hope that Mr. Ed, and maybe also one of the other members of his old clan, will want to contribute further.

I’ll start by introducing myself, I’m Ed, a forty something teacher from Kent. A few years ago I answered an advert posted on the now sadly defunct The Sound of Being OK Blog. They were looking for a replacement for the heavily pregnant KT. For a short period of time I filled those dainty but reassuringly expensive boots with tales of teaching English and my failed attempts to woo a fellow teacher. She turned out to have a husband, lets just leave it at that.

Then understandably TSOBO ceased to be.

I never met Tim Badger but I spoke to him twice on the phone. He was great, he had this deep Yorkshire accent that had a twang of Devonian on certain words (like ‘Newton Abbot’). Our second phone call lasted nearly two hours and well over an hour of that was a chat about how much we both hated Arsenal. We also revelled in the joy that we both shared a love for badly dubbed Kung Fu films from Hong Kong and the writing of Ian Rankin. He’s greatly missed but I think we all know that.

TSOBO was great fun, for three months nearly every day my inbox would ping with ideas for the blog or with emails that SWC and Badger had received from readers. They also sent me music, once a week on a Friday evening a link would appear and you’d click on it and a couple of hundred tracks would appear most formed stupid lists like “Top 30 songs that mention chocolate bars” or “Top 50 Bands who have a member called Steve” – they genuinely did this. I think Pavement were number one on both those lists.

I keep in contact with SWC, I mean I live quite close to his dad – we have a vague plan to meet up when the lockdown is over. We talk all the time and the other day he persuaded me to write an ICA for JC (I want to get back into writing…). In true TSOBO style I set the ipod (or in this case – phone) going and decided to write about the 11th band that came on…although I cheated and made it the twelfth band that came on because the 11th was INXS and no one needs to be reminded of ‘Suicide Blonde’ during these difficult times, so Mudhoney it is. Sorry to all you Hutchence fans.

Mudhoney, for those who have been sleeping underground for the last 30 years or so, are on one of the most influential US rock bands of all time. They were huge influences on the likes of Nirvana, Smashing Pumpkins and even Sonic Youth who begged the band to tour with them in days of ‘Daydream Nation’. More recently the likes of Foals and Jack White (by the way I have yet to write a piece about music where I haven’t mentioned Jack White, I should have perhaps in hindsight written an ICA on Jack White) have both claimed that the band influenced them.

I think it’s fair to say that Mudhoney have inspired the dirty punk rock sound that would become grunge more than most other bands. I also think that the bands debut record ‘Superfuzz Bigmuff’ is not only the greatest name for an album ever, but its one of those albums that apparently only 500 people bought when it first came out, but all of those who did, formed a band. I think that for a while it was Mudhoney that was keeping SubPop records afloat.

I had ‘Superfuzz…’ on vinyl and even when it was brand new it sounded like the needle was shagged. I formed a band after hearing it. I say band, it consisted of me on guitar and vocals and my brother who is nine years younger than me so he was 6 (!) when this came out, he played the plastic box. But Mudhoney aren’t just about dirty punk rock, you can hear a lot of blues rock in their later records and I own at least one Mudhoney track that contains a marimba which hints possibly at a Captain Beefheart influence.

Let’s have some music.

In n Out of Grace (Taken from Superfuzz Bigmuff 1988, Subpop)

Superfuzz Bigmuff was originally released as a six track EP, and this track closed the second side. They should have opened with it, but then again, it’s the closest the band ever got to being ‘epic’.

You will of course recognise the sample – it’s the same Peter Fonda one that Primal Scream used for ‘Loaded’ but Mudhoney stretch the sample out for a bit longer and then a load of drums kick in and guitars crash in and Mark Arm starts literally screeching away. It’s not often I say this but there is also a pretty incredible drum solo in this about halfway through and the guitar break that follows it is just ridiculously cool. The way Arm yells “Oh God, I just love to hate” near the end is one of grunge’s finest moments.

Probably the bands more recognisable song. It was released back in August 1988, making this song nearly 35 years old. ‘Touch Me I’m Sick’ immediately highlighted that Mudhoney had a sense of humour. It also highlighted that SubPop were a label to be adored as they thought it was perfectly acceptable for a band to release a song about violent sex and disease as a first single. Its brilliant obviously, heavily distorted and frankly houses guitars that are all over the place, vocals that don’t just snarl they growl and drumming that is more frantic than Liam Neeson in the film ‘Taken’.

Back in 1990 someone decided that it would be a good idea if Mudhoney and Spacemen 3 released a split single. Spacemen 3 would take on a Mudhoney song and vice versa. Only Mudhoney didn’t really stick to the rules. They decided to cover ‘Revolution’. A fist in the air anthem about change. The took an angry polemic call to arm and inserted a line about methadone suppositories in the middle of it. Pete Kember took umbrage (Jason Pierce’s reaction is not recorded) and pulled the plug on the release. Kember should have lightened up a bit because Mudhoney’s version is incredible, granted it takes away some of the intent of the original but still, it absolutely rocks. The Mudhoney version eventually was released a B Side a few years later.

And here’s the track that Spacemen 3 covered and famously as SWC will tell you it’s the only song on ‘Recurring’ that features both Kember and Pierce – which means it’s a hell of a record right…?

Well sort of, its basically a rewrite of a Stooges song but it’s still pretty amazing and it is still a regular part of Spectrums set when they play live, so Kember must like it. Compared to ‘Touch Me..’ and some other tracks the band did, its pretty mellow. Personally, its far better than the Spacemen 3 version. Which you can listen to as well and agree with me later.

Another day, another split single, they were all the rage in the early nineties apparently. ‘You Stupid Asshole’ was originally written by the Angry Samoans who were a punk band that were around in the late seventies from the US. I include this not because its particularly amazing – I mean its an Ok song. I include it because I saw this on the indie chart segment of Saturday lunch time staple The Chart Show and loved the fact that the producers forgot to censor the word ‘Asshole’. I like to think that a million parents choked on their sandwiches. I mean they probably didn’t but please don’t spoil it for me.

The first full Mudhoney album was released in November 1989 and it contained a bit less of the raucous racket that the earlier EP’s had. Yet it still showed a band full of energy (as shown by the video to this which you can see on You Tube). I also think that in this song you can hear that guitar distortion sound that has become something of a trademark and also that yelp near the start is just incredible. A yelp that helps to pinpoint the exact moment when Kurt Cobain decided that ‘singing wasn’t that important’.

Or to give it, its proper title ‘You Got It (Keep It Out of My Face)’. Everything about this is excellent and I think with the possible exception of ‘Touch Me..’ this might be my favourite Mudhoney track. Everything from the military drumming, the rumbling bass, the guitar, the scream at the start is sheer bloody perfection.

Just for the record, its about Courtney Love, and about how she was ‘rather popular’ in Seattle before she settled with the bloke from Nirvana. You could say based on the lyrics that Mark Arm wasn’t particularly enamoured with Ms Love (“Fuck You, Keep it out of my face”).

Yup, that ‘Pump It Up’. JC and a bunch of others will hate this but personally I think this is a very faithful, and splendid version of Elvis Costello’s classic. The band list it as one of their favourite records of all time and recorded simply because they could, which one supposes is a good enough reason.

Incredibly this was the bands first UK Chart hit. It reached the giddy heights of Number 60 back in 1991. Presumably the public were interested in them based on the sudden success of Nirvana and some of the other bands that were all the rage back then. I don’t quite know why Mudhoney never really had the massive success that some of their contemporaries did because their music is just as good.

Suck You Dry (1992, single from ‘Piece of Cake, Reprise Records)

Actually the reason why Mudhoney probably never really cracked the mainstream is because they were too readily seen a band who were taking the piss. In 1992, literally anyone from Seattle could have released a grunge record and charted in the UK with it, at the very least there would have been radio play. Apart from Mudhoney that was, who instead of just toning down the sarcasm, turned it up slightly.