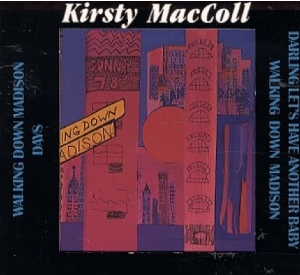 It was just a week after the break-up of The Smiths that Johnny Marr penned a tune he quickly sent onto Kirsty MacColl who, at the time, was needing a bit of help overcoming a bout of writer’s block. It turned out to be exactly what she was looking for although it still took a few years, with the addition of lyrics, a bit of melody and a little bit of rap, before it was shaped into the hit single Walking Down Madison.

It reached #23 in the summer of 1991 with Johnny contributing guitar to the recording process. It was released in a number of formats and it is CD2 I’ve turned to today for the fact that it also enables contributions from Ray Davies, Billy Bragg and Johnny Moped.

The second of the tracks is of course the record company being lazy by including Kirsty’s #12 hit from just two years earlier, the rich and gorgeous take on the song first made famous by The Kinks.

The third of the tracks is a duet with the Bard of Barking which sounds as if it was great fun to make. It’s a cover of a song by the infamously legendary Johnny Moped, a mid 70s pub/punk band considered by many to be pretty talentless in the grand scheme of things, although their number at one point in time did include the man who would become Captain Sensible of The Damned and then later on provide us with a novelty #1 hit single.

Woth mentioning too that Johnny Moped scored a #15 appearance in the 1977 edition of the John Peel Festive Fifty (which that year was NOT a listener’s chart but entirely the choices of the late DJ):-