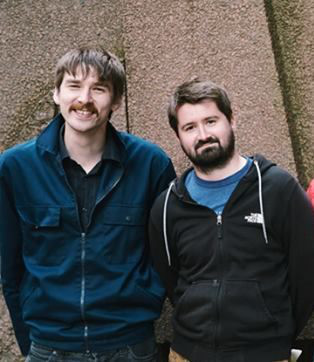 Over The Wall was a duo consisting of Ben Hillman and Gavin Prentice, with their output (as far as I can make out from Discogs) consisting of one album and three 45s/EPs between 2008 and 2013.

I’ found them via a track taken from the Live at Limbo compilation that just a couple of months back provided the song for the entry provided by Night Noise Team in this long-running series.

Ben and Gavin are described accurately as multi-instrumentalists, with both of them contributing over many years to a number of albums recorded by Scottish musicians, and certainly in Gavin’s case as a member of touring bands deployed by solo musicians when they go out on the road. I know also that Gavin writes, records and performs as Ultras, and so it is fair to say they are mainstays of the music scene here in Scotland.

Here’s a little bit of info gleaned from a magazine article back in 2010 on the eve of the release of their debut album and accompanying tour:-

Over the Wall emerged in the mid-noughties from the Glasgow collective of the same name and whittled themselves down to two members – Bathgate’s Gav Prentice and Ben Hillman of Bridlington, Yorkshire – before proceeding to create the exuberant, Springsteen-inflected take on electropop we know them for today.

A long time coming (though it’s no Chinese Democracy), their impending debut album – Treacherous – wraps a cavalcade of cutesy beats, trumpet, organ and anthemic power chords into an impressively varied but compact whole. Lyrical themes are similarly diverse, ranging from romantic escapes of everyday drudgery to vampires, via snooker and Rafael Benitez.

The song on Live at Limbo was Track 4 on Treacherous. I thought the sound was a bit muddy and so I’ve gone out and bought a digital copy of the studio recording.  It’s an ambitious effort that aims to make a few valid political points, as Gavin Prentice once explained in an online piece:-

1945 was the year that Attlee’s Labour party beat Churchill and began constructing the welfare state, and 1984 saw the miner’s strike and quite an explicit declaration of war against the British working class from the government. It’s probably a good point to mark the death of the post-war consensus on the importance of community and collective action, and its replacement by Thatcher’s “there’s no such thing as society” society. But it’s quite a personal song too, an old couple looking back at the changes for better or worse.

Believe it or not, I’ve still not exhausted the letter ‘O’ in this series. Tune in next Saturday for one more…..