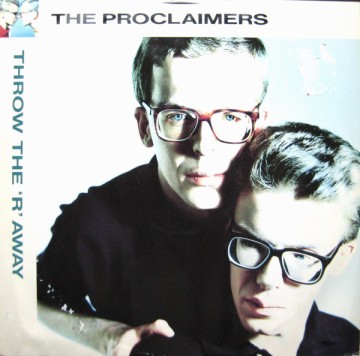 The Proclaimers are a Scottish rock duo formed in 1983 by twin brothers Craig and Charlie Reid, who were born on 5 March 1962.

They came to attention with their 1987 single “Letter from America”, which reached No. 3 in the United Kingdom, and the 1988 single “I’m Gonna Be (500 Miles)”, which topped charts in Australia, Iceland and New Zealand. The Proclaimers have sold over 5 million albums worldwide.

First active from 1983 as an acoustic duo, the Proclaimers moved toward band-oriented rock in later works. The Proclaimers’ style draws from a diversity of influences, including country, folk, and punk rock. Their playing range has included roots rock, alternative rock and folk rock, and their music is typified by their Scottish accents. The Proclaimers often tour internationally, and have released 11 studio albums since 1987, the most recent being 2018’s Angry Cyclist, as well as three compilation albums and a DVD.

I thought The Proclaimers were a breath of fresh air when they burst on to the scene.  Debut album, This Is The Story, released in 1987, is a fine collection of songs, although I’ve always felt that the later version of Letter To America, on which the duo were joined by a band, was far too like Runrig to be listenable…..but then again, it was that version which took them to near the top of the charts, so what do I know?

Sunshine on Leith, the follow-up released in 1988, has some decent tunes on it, not least the title track which has become the terrace song of the fans of Hibernian Football Club, which indeed is the team followed by the Reid Brothers.  The mass sing-a-long after the Scottish Cup win of 2016, ending a run of 114 years without lifting the trophy, was quite exceptional.  But, with it being more band orientated than the largely acoustic debut, I didn’t take to it nearly as much.

I haven’t bought a Proclaimers record since then, and can’t really say I’m all that bothered about it.

mp3: The Proclaimers – Throw The ‘R’ Away

This just happened to be their debut single.  I suppose it’s fair to say that they blazed a trail for quite a lot of the music that’s come out of Scotland in the 21st Century given nobody is worried about singing in their natural accent any longer.