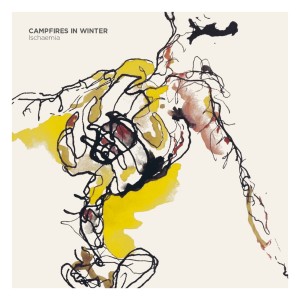 Last week saw the release of Ischaemia, the debut LP from Campfires in Winter, a four-piece band from the village of Croy which is some 15 miles to the north-east of Glasgow.  It’s also fairly adjacent to Kilsyth which is the roots of The Twilight Sad.

Campfires in Winter have been on the go for the best part of a decade. I can recall seeing them as a support act as far back as 2010 and I’ve caught them live on a few occasions since. They’re a four-piece consisting of Robert Canavan (lead singer/lead guitar), Wullie Crainey (bass guitar), Scott McArthur (keys/guitar) and Ewan Denny (drums). Robert’s vocal delivery leaves you in no doubt that they are from Scotland as he rightly makes no effort to disguise his lilt. They’re a band who, to my ears, have been greatly influenced by a fair number of most critically acclaimed bands to emerge since the turn of the century. At times on this album I could hear more than a hint of The Phantom Band, the afore-mentioned Twilight Sad, Frightened Rabbit and going back a bit in time there’s some Idlewild and even the The Skids in their Iona/Joy-era.

Perhaps therein lies why I’ve never quite elevated the band to the higher echelons of the listening post – they’re excellent at what they do but there’s never been quite enough to make them really stand out from what has been an ever-increasing crowd. There are a number of really special moments on the debut LP which has nine songs spread over just under 45 minutes. The opening track and past single Kopfkino will certainly remain on heavy rotation for a while and I really enjoyed Eating All The Bodies, a track that goes someway to making up for the absence of new material from The Sad this past 18 months or so while they were touring with The Cure.

It’s a solid and worthy debut LP but one that I feel will appeal more to their existing fan base than anything hugely wider.

I do hope that some of you, having listened to the three tracks on offer, will consider buying the debut LP or indeed the older material not included on it.  Click here for details.