A GUEST POSTING by HYBRID SOC PROF,
our Michigan Correspondent 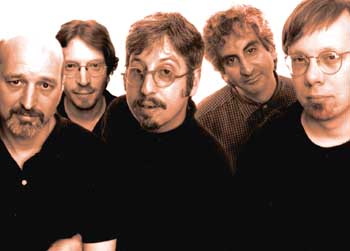 I only have a vague recollection of Yo La Tengo releasing Ride the Tiger (1986). I knew they were from the musical world that bounced between Hoboken and New York, so their mixture of acoustic and electric guitars, folk, rock and experimental sounds made sense… I liked it, but not enough to go see them. I did see them in San Francisco a few years later, after President Yo La Tengo (1989) was released, which I liked more. But live, at that point, only three songs really worked for me. Otherwise, they seemed somewhere between pretentious, precious and annoying.

Perhaps what was missing was Dave Schramm. Schramm had played guitar on Ride the Tiger before parting to start his own band, The Schramms. Their first record, Walk to Delphi (1989), came out around the same time as President Yo La Tengo and I instantly fell in love with it. Like so many bands/musicians I like, Schramm’s commitment to singing is deeper than his talent – but his voice blends really well with his guitar (and that guitar is wonderful) and the tone of the band’s songs. Acoustic and electric guitars blend and intertwine, there’s sustain and vibrato to make your heart go pitter-pat, he put poems by Emily Dickinson to music, and there’s a quiet instrumental about a little green inchworm. The songs are sweet but never saccharine, they’re romantic yet never cloying… “It’s Not What She Wants” and one of the Dickinson poems, “Out of the Earth,” are included here. The version of “Number Nineteen,” originally recorded for Walk to Delphi (and the other Dickinson poem), that I’ve added is from a solo record release in Germany, Folk Und Die Folgen (1993.)

Rock, Paper, Scissors, Dynamite (1992) was a decent follow up but the band members had changed and, to my ears, some of the soul was missing. I’ve included my favorite, the bouncy “How Many Lives” in this set. Around this time, I first saw the band appear on one of the many song collections they’ve contributed to. Neurotically Yours: A Tribute to the Saints from 1992is really uneven but the Schramms’ cover of “In the Mirror” rings and soars and makes me smile just to think about. It’s the fifth cut here.

When Little Apocalypse (1994) was released, my time on radio was coming to an end and I was a little tentative about giving it a listen. I’d read that the composition of the band had shifted once more, and I really didn’t want to be disappointed… It’s a superb record, solid-to-excellent throughout. The standout cut Schramm wrote himself is the lament, “Where Were You” but the best song on the record is a cover of Lucinda Williams’ “Side of the Road”… To my ears it’s noticeably better than the original, possibly the best among the many and diverse versions so easily found.

Dizzy Spell (1996) followed two years later, with fewer changes to the line up, and – while not as good as Little Apocalypse – is close (to my mind.) “Wild Season” fits the flow of the ICA and is among my favorite songs on the record. The version of “Tell Me Again and Again,” the fifth song on Dizzy Spell, I’ve added is from 2000 Weiss Beers from Home (2003), I high quality solo live recording from a show in Regensberg, Switzerland.

The ICA ends with “Simple Arithmetic” from One Hundred Questions (2000). In one way, it’s more of the same style and tone but I learned, some time back, that about half the time what I want from a band is to continue to do what they do as well as they can do it. Hope you like the set.