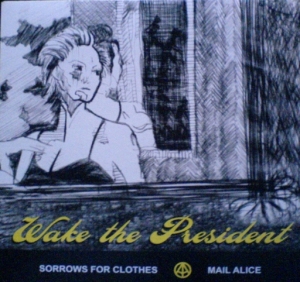 Twin brothers Bjorn and Eric Sandberg, bassist Mark Corrigan and drummer Scott Sieczkowski formed Wake the President in 2005 while the twins were students at Glasgow University.

Informed by a number of shambly indie pop acts from the ’80s and ’90s (the Go-Betweens, Arab Strap, and Orange Juice among them), the group put together a group of demos that welcomed comparisons to the Shout Out Louds, Je Suis Animal, and the Pains of Being Pure at Heart. The band was eventually picked up by Douglas MacIntyre and Ken McCluskey’s Electric Honey Records, a student-run label (manned by the music industry management students of Glasgow’s Stow College) that gained some attention in 1996 for releasing Belle & Sebastian’s Tigermilk.

Wake the President’s debut single on that label, “Sorrows for Clothes,” was released in 2007; another single, “Remember Fun,” came out on Norman Records soon after. In 2008 the singles caught the attention of BBC Radio 2’s Stuart Maconie and Mark Radcliffe; the singles were put into rotation, and each song went on to earn the coveted title of single of the week. Wake the President’s debut full-length, You Can’t Change That Boy, was released in the U.K. and the States the following year, on Electric Honey and Magic Marker Records, respectively. They followed it up in 2011 with an album titled Zumutung! on We Can Still Picnic records.

By all rights, I should adore Wake The President given all the boxes they tick in terms of influences and the great names from the Glasgow pop scene who were working with them from the start.

And while a recent listen again to this debut single and debut album does demonstrate some really good songs my lack of love for the band was coloured from going along the LP launch at the beginning of 2009 and coming away incredibly underwhelmed. Maybe I just caught the band on a bad night or maybe I just expected too much from them but apart from the sound being really awful (which makes me think the choice of venue was probably wrong – they went for a grand looking old hall which is more used to staging wedding and ceilidh bands rather the alleged bright new things of Scottish indie-pop) there was also the thought that the boys took the audience for granted and posed their way rather than grafted their way through the set.

Just a pity the band didn’t become as big as they had hoped. This single was limited to just 500 copies and could have been a sort of golden ticket (not that I would have sold!!)