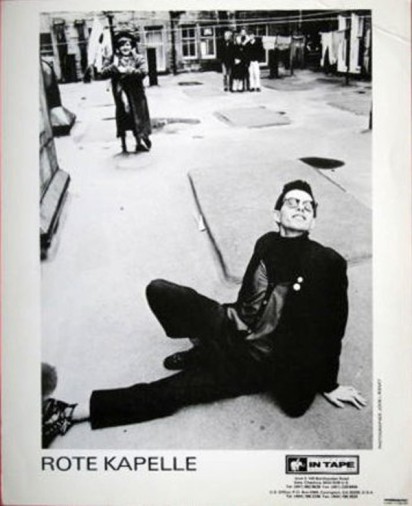 Rote Kapelle were a post-punk/indie pop band from Edinburgh, Scotland, active during the 1980s. Its band members included musicians who were also members of Jesse Garon and the Desperadoes and The Shop Assistants.

The band was formed in the early 1980s by Andrew Tully (vocals) and Marguerite Vasquez-Ponte (vocals), both of whom would also form Jesse Garon and the Desperadoes, with Chris Henman (guitar), Ian Binns (keyboards, also a member of The Stayrcase), Malcolm Kergan (bass, also a member of The Thanes), and Jonathan Muir (drums).

The band’s debut release was The Big Smell Dinosaur EP in late 1985, after which they were signed by Marc Riley’s In-Tape label. Tully described the band’s sound in 1987 as a blend of noisy post-punk and anorak pop. Vasquez-Ponte was also a member of a third band, The Fizzbombs, alongside the Desperadoes’ Angus McPake and The Shop Assistants’ former drummer Ann Donald. They released two further singles and two more EP’s, one of which featured tracks from their Peel Session, before splitting when Vasquez-Ponte joined the re-formed Shop Assistants. An LP, No North Briton, was released in 1990.

I’m sure I saw Rote Kapelle play live in Edinburgh in the mid 80s, but I don’t recall ever getting round to buying any of their records.  Thankfully, they have become something of a staple across various box sets/compilations harking back to the era, and I’ve been able to acquaint myself with four of their songs, including this wonderful piece of noise from the C88 box set issued a while back by Cherry Red:-