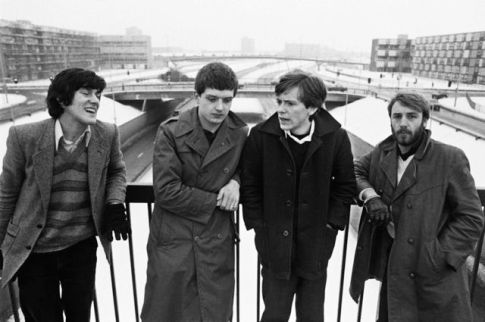 There’s a while bundle of ICAs in the pipeline, many of them from guest contributors.  I’m going to ration them to one per week for the time being so that they all get a decent amount of space and time to be absorbed.  I’ve also penned some myself and I’ll fit these in around everyone else’s….please keep them coming as they have become the mainstay of this blog.

It’s been a while, but I reckoned it was about time I took on another nigh-on impossible task.  If I said that I first thought about this last summer, you can hopefully get some idea of how often I’ve put down two sides of an ICA that I considered not only to be derivative but also the perfect running order….. only to change my mind.

In the end, I thought the best way to approach it was to imagine that I had been tasked with curating an album that was to be played to music fans who were receiving their first introduction to Joy Division. It still saw six takes discarded before I decidied that take seven had to be submitted on the basis that the project was about to run out of time and money. Here goes:-

FEEL IT CLOSING IN : A JOY DIVISION ICA

The earliest song to feature in the ICA and the one which provides its title. This was the band’s debut for a new Manchester-based record label, featuring as one of four acts on A Factory Sample alongside Cabaret Voltaire, The Durutti Column and John Dowie. (It’s just struck me that I’ve been lucky enough to see all four of these acts perform in the live setting).

We should all be honest and accept that the four earlier songs on An Ideal For Living don’t cut the mustard, being not much above demo quality.  As such, Digital is the band’s calling card. It was the first time the four musicians had worked closely with producer Martin Hannett and the outcome was something that blended old style punk – have a listen to the guitar solo which is more than a nodding tribute to early Buzzcocks – with a cold, hypnotic almost artificial sound that was unlike anything any of us had much experience of in the late 70s. And, of course, there’s that voice.

A guest posting from Dave Glickmann in August 2017 described Transmission as the first true kickass JD track; my own thoughts were articulated at length when I placed it at #6 on my 45 45s at 45 rundown – Hooky’s basslines grab you in, Stephen’s drumming sets a beat that makes you want to jump out of your seat while Barney’s guitar work reminds you of the punk ethos when anyone could pick up an instrument and play. But it’s THAT voice that makes the song so very special. It’s the sound of someone reaching deep inside his own soul and then straining it through every nerve in his body before hitting the listener in the chest with its power and authority. And just as you think he can hit you no more, he screams…..

I did. As did many others.

It’s not all about dancing mind you. A song I didn’t own for a long while after it had been released. It sort of beggars belief that something this immense, epic and masterful was intended to be restricted to a limited edition 45 available only in France. The death of Ian Curtis changed everything for his band mates and his record label, and while the decision to reissue Atmosphere was an early signal that the rules had changed, it never displayed any facets of a cynical cash-in. This was a song that deserved to be widely heard, and in the pre-internet age, the only way that could be achieved was via radio or in your own bedroom on a turntable or cassette player. Tony Wilson et al did us all a huge favour, even more so in 1988 when it was re-released again to promote a singles compilation, when acclaimed photographer Anton Corjbin was commissioned to direct a promotional video which itself set in train the idea of a film bio to be shot in a similarly monochrome style.

The Sound of Being OK team are running a delightful series looking at some of the best b-sides of all time with Joy Division featuring as a result of me penning something for them about These Days, the flip side of Love Will Tear Us Apart. I’d have been equally happy to warble on about Dead Souls, the b-side of the original French release of Atmosphere, which, incidentally was limited to just 1578 copies and is worth an absolute fortune these days (pun intended).

I can’t ever recall hearing Dead Souls, which had been recorded at the tail end of 1979, until the release of the double-album Still in October 1981. Even then, it was only thanks to a friend putting the song on a cassette tape for me as I couldn’t afford to buy the new record; besides, it consisted mainly of what was a fairly substandard live performance which one listen was felt to be enough. It would take until 1997 before I really for the opportunity to appreciate the song when I was able to splash out on the 4-CD box set Heart and Soul.

The song obtained a certain amount of notoriety, stemming in part from its title (which like many JD songs isn’t part of the actual lyric) and that many fans, in the wake of the death of Ian Curtis, interpreted the chorus as alluding to suicidal thoughts. I’ve never bought into that. This is one of those songs, stuck on a b-side, that was completely overshadowed by the a-side which is a damn shame as it has proved to be one of their most enduring songs in which the trio playing the instruments got to sound as powerful and terrifying as the vocal delivery.

A tune that wouldn’t sound out-of-place in the early catalogue of New Order, this is part of the evidence I’ll present to argue against anyone who says that Ian Curtis would have been dismayed and appalled by the music his mates would go onto make in their next band. It is impossible to second-guess what might have happened hadn’t he taken his life. The subsequent tour of America may have exposed him to new sights, sounds and experiences that would have been reflected in his writing, or it might well have been that the strains of such hard work would have really exposed his physical and mental wellbeing to the extent that he would no longer want to be part of a band. Nobody can say with any sort of certainty.

Isolation gives a hint of where the music could have gone…..as equally do the songs I’ll come to on Side B of this ICA….that the remaining three members went increasingly down the synths and electronica route indicates to me that Ian would likely have gone along with them.

The tempo and rhythm of the opening track on Unknown Pleasures always reminds me of Transmission. Most labels would probably have pushed for this to be considered as a single to be lifted from the album but Factory weren’t that business orientated. It’s long been recognised that She’s Lost Control is a song that reflects on epilepsy but there’s been less acknowledgement that Disorder, and in particular its second verse, has the singer trying to articulate the things that are going wrong with him:-

It’s getting faster, moving faster now
It’s getting out of hand
On the tenth floor, down the back stairs
It’s a no man’s land
Lights are flashing, cars are crashing
Getting frequent now
I’ve got the spirit, lose the feeling
Let it out somehow.

The thing is, nobody outside of the tight confines of the band knew of his condition and the lyric only really began to make sense much later on.

2. Love Will Tear Us Apart

Millions of words have been written about LWTUA and I don’t have anything new or fresh to add. One thing that does stand out for me, however, is that despite it being by far and away the most popular and most aired of their songs, I never ever get tired of hearing it. Oh, and I’m pleased that a promo video was shot for it as it did provide some high-quality footage of the band before it became tragically too late.

This is the song which most likely introduced the band to a wider audience of Mancunians and other residents of north-west England (aka Granadaland) given it was performed on their debut TV appearance in September 1978 when Tony Wilson, at long last after much badgering from Ian Curtis and Rob Gretton, gave them a slot on Granada Reports, the regional evening news programme on which he was a presenter (as well as mover and shaker when it came to the musical segments). It’s a brooding, dark, claustrophobic number that has always seemed to me to be of the ‘It’s Grim Up North’ genre that so many of the 70s/80s bands from that part of the map which incorporates Liverpool to Leeds via all points, would prove so adept and capable of churning out with what seemed like little effort but much aplomb.

I’ve said before that ICAs can seem like an impossible task. I’ve spent weeks trying to pull this one off and I’m not 100% convinced that I’ve succeeded. It’s impossible to think about Joy Division without thinking about the tragic circumstances they had to deal with.

Closer was a really tough listen to begin with and its final two tracks in particular. The tunes were of a funereal pace and the words felt as if they were from someone on the edge of the despair. As has been said so many times since, how could anyone not have spotted that the lyricist was in a bad way and in a shockingly bad place. I was 17 years of age and to be honest, I wanted my music, as much as possible to be vibrant, uplifting and occasionally danceable. Joy Division had already generated a few moments like that and it was those types of songs that were on heavy rotation, Side 2 of Closer was a tough, and at times impossible, listen.  But then I got older and life threw a few more experiences at me. My musical tastes matured and The Eternal and Decades, were no longer impenetrable.

Oh, and the reason I have them together, just as they are on the parent LP, is that I cannot bring myself to separate them. I don’t know how many compilation cassettes, CDs or digital lists that I’ve compiled for folk over the years – I suspect it runs into four-figures – but I have never included either of these on any of them. They simply have to be listened to back-to-back.

I’d like to dedicated this ICA to Jacques the Kipper. Nothing to do with him being a particularly big fan of Joy Division (although he is….but he prefers to look forward than back). It’s more that I feel this could form the soundtrack to our friendship these past near 30 years. He’s always been there, in the words of Rev Al Green, whether times have been good or bad, happy or sad. Cheers mate.

PS : The teams for edition two of the ICA World Cup, due to take place in 2020, are beginning to shape up very nicely!

PPS : Sad man that I am, I’ve already thought of a similar type of competition, but with a twist, for 2019.  Let’s just say, it will be a collegiate effort – all will be revealed in the very fullness of time.