Nick Cave has come a very long way since this July 1981 single took him into the UK indie charts for the first time:-

Wouldn’t it be great if, during his outdoor shows this coming summer, he threw this little hand grenade into his live set….possibly after Into My Arms or The Ship Song, just to give his audience a real wake-up call.

The band wrote and recorded this as a bit of a piss-take of themselves and the lazy way they were being portrayed in the music press at the time, hamming up the whole goth thing which was gaining a head of steam. The actual recording sessions only added to things as the band went into a studio during the cheap down time – i.e. – after midnight – when the daytime singer/band packed up for the day. Legend has it that the daytime was taken up by Phil Collins, and I wonder if their paths did ever happen to cross.

There’s an equally frantic and wonderful sounding b-side to enjoy….it was written by the late Roland S Howard and is one that I feel laid the foundations for later Bad Seeds songs such as Tupelo.

mp3 : The Birthday Party – Blast Off

Incidentally, the first recording of Release The Bats predates the actual 45 by a few months thanks to a John Peel session in April 1981.

I really regret that I never understood this band until long after they had broken up. I’d love to have gone along to see them in their heyday…..although I know I would just have stood at the back out of harm’s way.

I rarely get any satisfaction from books that are simply filled with illustrations or photographs. It usually needs a decent narrative to keep me happy or satisfied. But not What Presence! : The Rock Photography of Harry Papadopoulos.

The re-kindling of the interest in Harry’s work was initially sparked off by an exhibition that was held in a Glasgow gallery between December 2011 and February 2012.  It was an exhibition that I was drawn to time and time again….and every time I paid a visit I found myself changing my mind about what was my favourite photo.  Here’s what was written to publicise that particular exhibition:-

Harry began his photographic career in his Glasgow home town, standing outside the Apollo, flogging gig-goers newly-developed shots from bands’ Edinburgh shows the night before. Harry’s impulse to guerilla lensmanship swiftly drew him to London: from 1979 to 1984 he was a staff photographer for the music weekly Sounds, providing countless front covers. During those five years, Harry’s photographs covered the post-punk waterfront, from Blondie to David Bowie; the Associates to Devo by way of Joy Division, Bryan Ferry, Siouxsie and the Banshees, The Birthday Party, The Cramps, The Clash, Altered Images, Penetration, The Specials and Suicide (not to mention Wham!, ABC and Spandau Ballet).

At that time, Harry’s London flat also became home to fellow Scots migrants like Orange Juice, Aztec Camera, Josef K and the Bluebells. Harry thus became one of the first few photographers to capture the fey arrogance of Edwyn Collins and his Postcard cohorts and subsequently appeared in the Derek Jarman video for ‘What Presence’. Several of these photos comprise Harry’s first career retrospective at Street Level Photoworks.

In addition to the expected band portraits and live-action front-row shots, there are a host of unique photos: salute the militant gay triumvirate of Jimmy Somerville, Tom Robinson and Andy Bell as they march for homosexual equality. Savour Peter Capaldi – years before he learnt to swear and mutated into Malcolm Tucker – looking cute and wholesome as bow-tied front man of Glasgow band The Dreamboys (with favourite US late-night chat show host, Craig Ferguson on drums). Taste the flying mud, baying skinheads and noxious aroma at T In The Park’s ill-fated grandsire, the 1980 Loch Lomond Festival. The exhibition will be accompanied by guest writers and events documenting the Post Punk explosion in Glasgow in an era when the city’s musicians were a focus of the global music industry.

The exhibition is co-curated by Ken McCluskey.

That’s the basics. The full story behind the exhibition hid a sad story that Harry had suffered a brain aneurysm in 2002 and had come home to Glasgow in 2006. One of the city’s pop stars – Ken McCluskey of The Bluebells learned this a couple of years later from a chance encounter with Harry’s brother who just happened to be doing some electrical work in Ken’s house.

Ken paid a visit to Harry and found that his house had thousands of negatives and images just lying about in cardboard boxes and bags, some of which were the worse for wear.  Harry’s poor health was such that  he was about to move into a care home and so Ken took on a mission to salvage and digitize the negatives, a process that took the best part of a year. He then took the results to a curator whose expert eye very quickly concluded that the work was very worthy of an exhibition.

As I said earlier, I went along a few times to the exhibition.  It wasn’t just great photos that made it such a joy but the reproductions of magazine and fanzine covers that stirred so many memories.  I bought a few momentos from that particular exhibition, including packs of postcard sized photos containing some of my favourite shots. There was an opportunity to purchase larger sized limited edition prints but I wanted them all and couldn’t justify the expense. If only someone would curate a book.

In April 2013 my prayers were answered and my wee brother arranged to give me a copy for my 50th birthday.

The book is a real joy. It has a cover whose colours pay homage to the Sex Pistols debut LP and it has contents that take me back to that time when music was the most important thing in my life and when I couldn’t imagine it being any different. It is also a reminder that I fell in love with so many musicians not simply as a result of the sounds they made but for the way they looked, how they dressed and the attitude they had on stage and in real life.

It’s 120 pages long and regrettably it only captures a fraction of the images that were on display at the 2011/12 exhibition but I’m guessing the cost of a larger book would have been prohibitive – there’s a certain quality production level essential for books of this nature to make them worthwhile in the first instance.  The foreword from Peter Capaldi captures perfectly what makes the book so worthwhile:-

“Nowadays celebrity photography is ubiquitous and strangely anonymous, but here we have a collection of photographs that succeed time and time again in getting to the heart of the subjects and giving us a glimpse of the youthful dreamers behind all the noise.”

The book also enables Ken McCluskey to flesh out Harry’s life story a little bit more with the reminder that his home in London, shared with fellow photographer Robert Sharp along with Edwyn Collins and Grace Maxwell, was nicknamed The House of Camp and was where so many musicians from Scotland bedded down for the night when they ventured down to the capital for a gig.  I’m sure a separate book could be written about the nonsense that happened within its four walls and back garden such as the time when it became the location for a fantastic pop video directed by Derek Jarman:-

Harry has a cameo in the video – he’s the fully clothed hipster in the bath!!

My decision to review the book today was partly inspired by a comment from Charity Chic in the Billy Mackenzie posting last week as he mentioned Harry’s work was on display eight miles down the road from Glasgow in Paisley. (It was also partly inspired by a wee tale I’ve told in the footnote…)

The Paisley exhibition closed yesterday. I didn’t manage to get myself along and I’m annoyed with myself for that. But I’ve a feeling it won’t be too long before it pops up again, whether here in Glasgow or nearby.

Here’s three of excellent examples of Harry’s work with songs to accompany them:- 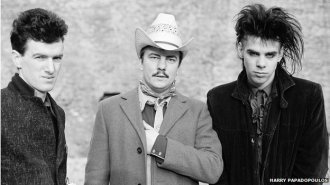 A wee footnote to all this.

Last week, Mrs V asked me if, during my blogging activities, I’d come across the name of Harry Papadopoulos. When I asked back what prompted the question she told me his name had come up in conversation with two sisters (Rena and Maria) who she bumps into and chats to every Sunday when she goes for a post-walk/jog beverage in a posh tea room in a nearby park. Turns out the sisters are second cousins of Harry and they are proud of his legacy of work….sometimes Glasgow feels like a village.