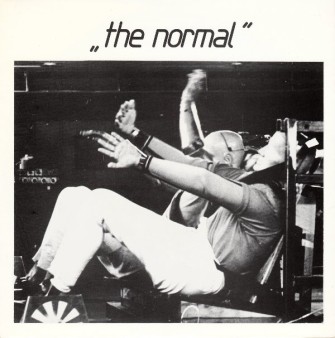 Today’s cracking debut single is one with a difference in that it proved to be the only single recorded by the act in question. It’s also one where the b-side subsequently became much better known than the a-side.

I’m sure the vast majority will know the backstory, but please, indulge me anayway.

The Normal was the performing name adopted by Daniel Miller in 1978 and under which he wrote, recorded, produced and distributed a 7” single that were quite unlike anything else happening at that time across UK music. The two songs were hugely influenced by the novel Crash, written by J.G. Ballard in 1973, with Miller being inspired to compose minimalist electronica to be played on what is today described as a ‘limited and quirky little synth’.

Daniel Miller never thought of himself as a musician, so it can be no real surprise that other than a 1980 live LP that was recorded in conjunction with Robert Rental (a Scots-born pioneer of electronica), there was never any other product from The Normal. Miller’s energies went into Mute Records, the label he had established to release the single, using its proceeds to run it as a full-time professional operation, primarily as a home for other experimental electronica artists and bands. The fact that he would discover Depeche Mode in 1980 changed forever his life, and the route the label was pursuing.

Huge credit has to go to Daniel Miller for the fact he stayed true to his principles as the money began to flow into the label, still seeking out and giving a home to acts that others shied away from on the basis of them being far from commercial and/or confrontational. It’s worth pondering just how different the music landscape in the UK would have looked in the 80s and beyond if The Normal’s one-off single hadn’t been issued and been enough of a success to allow its composer to fulfill his ambitions of an involvement in the industry.