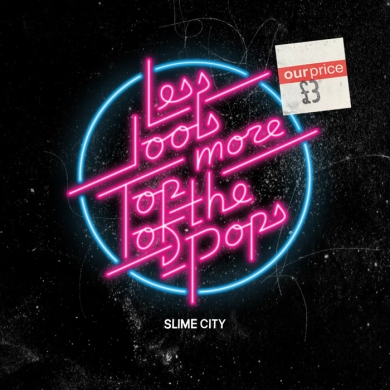 Slime City are a band from Glasgow, Scotland who play fast existentialist nerd rock for people who like sighing but also fighting.

That’s as much as you get from the Bandcamp page. I can add that the three members of Slime City used to be in We Are The Physics, a band that was around from 2005-2013 and who described their sound as “mutant science punk rock”.

The three members of Slime City are Michael M (bass and vocals), Michealdrums (drums and vocals) and Michaelguitar (guitar and vocals). I’ll lift the rest from a live review of a gig played at the Hug and Pint in Glasgow in September 2021, one of the first post-lockdown gigs to tale place in the city after a gap of 18 months, written for the Is This Music? website:-

The venue is pretty full for the first Slime City gig in quite some time…and the headliners do not disappoint.

The music is staccato, stop/start, with pounding riffs and angular diversions. At one point the guitarist is stopped mid-song by Michael M as he goes into a solo – “you’re not Eddie Van fucking Halen…”… This band do not take themselves too seriously and pretty much all the songs are a critique (and sometimes a caricature) of music.

The crowd certainly let off some steam, and it was one of the most welcome returns of recent weeks, showing just what we had missed.

I’ve picked up a couple of singles, thanks to the band being connected to Last Night From Glasgow, the co-operative label that is doing so much to energise and revitalise music in my home city.

There was a fun-filled lyric video posted by the band when the single was first released back in 2018. I think it’s worth pointing for any overseas readers not otherwise familiar that Later with Jools Holland, which began in 1992 and is now in its 58th series, has in recent years become the sole output for rock and pop music on the BBC. It hasn’t really been worth watching in a long while.

I might one day get round to telling the story behind Glasgow Is A Shitehole, the other single I’ve managed to pick up.