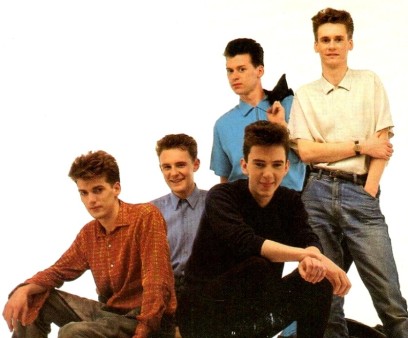 With apologies to readers of old as today’s posting features an element of cut’n’paste from a piece in the 45 45s at 45 series.

It would have been 1983 when I first heard Friends Again, catching them live at the Students Union at Strathclyde University. As it turned out, this was the first of many times that I would be lucky enough to be at their gigs, venturing down on one occasion to London on the day of the show and then back up immediately on the overnight bus. There was so much to like about how this band looked and sounded with guitarist James Grant and keyboardist Paul McGeechan sounding fbeing far more accomplished than many of their peers while the stylish and ultra-cool frontman Chris Thompson had a vocal style that was a cross between Motherwell and Memphis. And like all great bands, they had a deceptively brilliant rhythm section with Stuart Kerr on drums and Neil Cunningham on bass.

It is baffling that they would endure a career of such poor record sales and never getting beyond headlining the student circuit in the UK ( the London gig I went to was at the London School of Economics where they shared top billing with Fad Gadget). But theirs is an all-too familiar story of a label interfering and seeking to control the artistic and performance side of things, with bosses insisting on certain production values that diluted rather than strengthened how the band’s sound came across on record.

In short, they were stifled at every turn, including for a rare and important live TV appearance where somebody came up with idea of adding two female vocalists despite the band never having worked with any backing singers at any point in their career in the studio or on stage.  Utter madness.  And when success didn’t come with the first LP and the record label asked questions the band did the sensible thing and broke up, leaving the individual members to go off and do their own thing.

Friends Again were highly talented. On stage, they delivered sets that meshed the best of the Postcard bands with all sorts of folk, soul, blues and pop undertones depending on the rhythm and tempo of a song. I’ve come to realise that in some ways they were a bit ahead of their time in that a few years later there was a bit of a craze for rock/pop bands to demonstrate the strength of their songs and their playing abilities through ‘unplugged’ performances. Friends Again would have blown folk away if they had been given such a stage.

Their first three singles were largely self-produced but hadn’t yielded the results that Phonogram Records had hoped for. Big name producers were brought in as hired guns, particularly Bob Sargeant who had delivered chart success to the likes of The Beat and Haircut 100, but also Tom Verlaine, best known as part of legendary US art-rockers Television. The fact that two such diverse individuals with different approaches to production and indeed differing production values surely is all the evidence you need to realise that the label didn’t know what to do with the band.

In due course a debut LP, Trapped and Unwrapped, did eventually emerge after many painful and difficult sessions in the studio. Twelve songs that required the input of four different producers behind the desk although three-quarters of the album is credited alone to Sargeant. Worth mentioning that whatever work was done with Verlaine was obviously deemed unsatisfactory as only one track from those sessions made the cut.

Three of the songs on the LP were also re-recordings of earlier singles or b-sides and in each case were vastly inferior. A band who, on stage, were such an exciting and vibrant presence had recorded an album that was bitterly disappointing with the best moments being the acoustic numbers that hadn’t allowed themselves to be subject to the kitchen sink approach from the production desk.

More than 30 years on and I have calmed down a lot. I listen to the record and sort of enjoy it but still think of it as a missed opportunity. So maybe I can rectify it by offering up a Friends Again ICA as an alternative LP to that which was released, compiled from the album and the songs that appeared on the six singles released during their all-too-brief career.

1) Lucky Star (original version and b-side of Honey at The Core)
2) State of Art (12″) (third single and later remixed for album and EP)
3) Vaguely Yours (album track)
4) South Of Love (fourth single and album track)
5) Thank You For Being An Angel (b-side to Lullaby No.2)
6) Moon 3 (closing track on album)

And here’s the two sides of the ICA in LP sized chunks :-

Side A
Side B