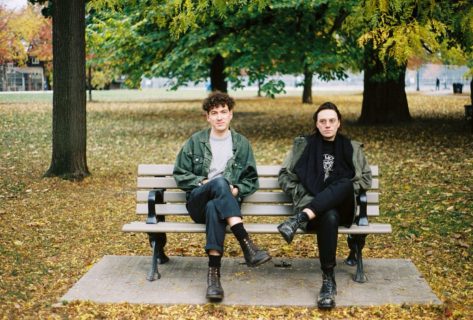 It was perhaps seven or eight weeks ago that SWC asked if I’d liked to contribute a piece on the Toronto Blue Jays to the weekly series on baseball teams that he’s writing up over at No Badger Required.  For those of you not familiar with the feature, there is always a little bit about the baseball team and the city it plays in, alongside a celebration of the great music to come out of each city, including a mention of at least one unknown singer or band.

My piece homed in on Ducks Ltd.  I’ll confess that it was an on-line search of ‘best new bands from Toronto’ that led me to them, and it really did turn out to be a stroke of luck.  Here’s a bio courtesy of their record label:-

Ducks Ltd. is a band formed in Toronto, Ontario, and currently based between Toronto and Geelong, Australia, that crafts bright and modern jangle-pop. The duo consists of Tom Mcgreevy, on vocals, rhythm guitar and bass, and Evan Lewis, on lead guitar. Both members were playing in other groups within the Toronto music scene and met while on the same tour. They then decided to collaborate upon discovering their mutual love for 80s pop bands like Felt, Orange Juice, and The Go-Betweens. Together, Ducks Ltd. stitches together layers of intricate melody to make moving, nostalgic music — an irresistible combination that radiates energy and provokes introspection.

Felt, Orange Juice and The Go-Betweens? Surely, that’s just record company hype over substance?  But, based on what the band has released over the past three years, it’s a well-made and accurate comparison.

A self-released four track debut EP, Get Bleak, in November 2019 created something of an on-line buzz, and led to them signing jointly with Carpark Records (Washington) and Royal Mountain Records (Toronto) the following year. The debut EP was re-released in early 2021 with the addition of three extra tracks, and this was followed a few months later by Modern Fiction, a ten-track album.

2022 has seen a number of digital releases, including one new single, Sheets Of Grey, and two rather tasty cover versions;  the first was Head On, on which they were assisted by Sarah Tudzin of LA-based Indie-punk band Illuminati Hotties, while the second was Inbetween Days, where this time the additional help on vocals came from Jane Inc, the name under which Toronto-based musician Carlyn Bezic performs as a solo artist.

I’ve picked up physical copies of the EP and album, as well as using this bandcamp page to get hold of the material released in 2022, and it’s fair to say that I’ve been enthralled by it all.  I also got really excited by the fact that Ducks Ltd are coming to the UK for a tour next month, only to groan out loud in dismay when I looked at the dates.

8 September 2022 will be the date of myself and Rachel’s silver wedding anniversary – we were together for more than seven years before making honest people out of one another.  Plans are already in place to be away at that time, and yup, that’s the date when Ducks Ltd are due in Glasgow.

Never mind, I thought to myself, they are in Edinburgh a couple of days later…..only it clashes with something else I have on that weekend, namely a golf weekend that’s been a year in the planning.

Mind you, there’s Manchester on the 13th….which is now sorted out in terms of gig tickets, travel and overnight accommodation (just got to hope there’s no industrial action stopping the trains from running).

In the meantime, I hope you’ll enjoy some of the sounds that have got me excited:-

The first two are from the EP and the latter two from the LP.