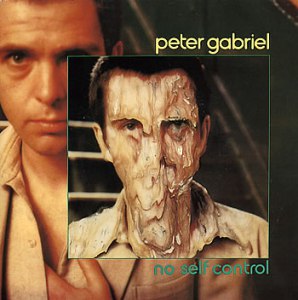 One of the reasons I began to listen to Peter Gabriel was the fact that he was championing the end of apartheid at a time in my life when I was just beginning to become more socially and politically aware of what was going on in the world. In particular, he recorded a song demanding justice for the death in custody of Stephen Bantu Biko which he featured on his LP Peter Gabriel III, and which he later released as a single

This was also the LP that brought Gabriel his first real degree of solo success, thanks to the lead-off single Games Without Frontiers which was a #4 hit in the UK. Today’s offering was the follow-up single, a rather dark number that focuses in on lust. The fact that it has the utterly delicious Kate Bush singing away rather erotically on backing vocals somehow only adds to its intensity.

mp3 : Peter Gabriel – No Self Control

I’ll quietly ignore the fact that it is Phil Collins who plays drums on the record. Actually, that’s a bit unfair….if he had stuck solely to his original day-job as a sticksmith, then Phil Collins would probably be lauded as a superb musician. As it is, we all think of him as the chart-topping man of the 80s loathed by many, but as the record sales demonstrate, loved by so many in the Thatcherite era…..

Quite clearly, the record label weren’t all that fussed about whether or not folk would buy this single, for the b-side was a track lifted from the LP.

A strange little number, largely instrumental in nature, it seems out of place on its own as a b-side as it was tailored-made for its particular spot on the album to lead into the epic closing track, the aforementioned Biko.

Incidentally, fans of the modfather might be interested to know that Paul Weller played guitar on one of the other tracks on the album.

mp3 : Peter Gabriel – And Through The Wire