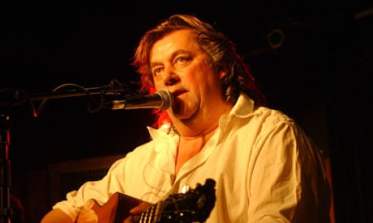 Today’s piece is an obituary from The Guardian newspaper, penned by Robin Denselow. Says it all way better than I could.

Jackie Leven, who has died of cancer aged 61, was a brilliant outsider, a remarkably prolific Scottish singer-songwriter who built up a devoted cult following during his lengthy, wildly varied and often turbulent career, but never achieved the level of success that he deserved. An intense, passionate giant of a man, he first came to attention in the late 1970s and early 80s, as leader of the highly praised but commercially unsuccessful band Doll By Doll. He went on to found a successful charity, the Core Trust, which treats “addicts of any sort”, before continuing his musical career as a soloist – still acquiring devoted fans, but never selling many albums.

Born in Kirkcaldy, Fife, of Romany descent, he began singing his own, blues-based songs in local folk clubs, but said he was forced to leave the area because he was picked on by a local gang. He was first married at 16, but began travelling, sometimes working as a labourer, although still performing, now sporting orange hair and using the name John St Field.

His friend Joe Shaw, the guitarist with Doll By Doll, remembers meeting him in a folk club in Bridport, Dorset, and finding that their common interest was “not folk songs about young maidens, but Hendrix and Van Morrison”. He says that Leven was “very intense. He could make you feel uncomfortable or the best ever – and he made me feel the best ever. He was the best friend I ever had.”

They shared a squat in a farmhouse in Dorset, and met up again in Hamburg “and spent all our time jamming on guitars”. Later, when Leven moved to another squat, in Maida Vale, London, he suggested they bring in a bass player and percussionist to form a band, and they started rehearsing “with mattresses around the walls to deaden the sound, but still annoying the neighbours”.

The result was Doll By Doll, dominated by Leven, whom I described at the time as “a mixture of Van Morrison and a psychopath”, but who could mix edgy, brooding rock songs, such as Butcher Boy, with stirring, lyrical Celtic soul, including the exquisite Main Travelled Roads.

The band recorded four albums between 1979 and 1982, including Gypsy Blood, which would later be hailed as a forgotten rock classic. At one memorable show at the London Venue, they were supported by the young U2. Shaw says: “It’s a mystery why we didn’t make it, when all our contemporaries did well. And our live shows were something else.”

In 1984, Leven’s musical career was brutally interrupted when he was mugged as he walked home at night in north London. His ribs were broken, and his larynx was “almost destroyed”. With his career apparently wrecked, he turned to heroin, and told me later: “I was spending £150 a day, and found I had no money.” He beat the heroin habit using acupuncture and reflexology, and with Carol Wolf founded the Core Trust to help addicts by using alternative medicine. He and Wolf recruited other counsellors offering free treatment, and was helped by Pete Townshend and Westminster city council. When I met him in 1988 he seemed far keener to discuss Core than Concrete Bulletproof Invisible, the short-lived band that he and Shaw had then started with the former Sex Pistol Glen Matlock.

For the last 17 years, Leven worked as a solo artist, recording for the independent label Cooking Vinyl. “It took me two years to sign him,” according to Martin Goldschmidt, who runs the company, “and since then we have released 26 of his albums. I kept telling him there were too many, but he kept coming up with scams to get another album out.” Some of his albums were credited to Sir Vincent Lone.

His remarkable solo output also included the 1994 album The Mystery of Love is Greater than the Mystery of Death, which included contributions from the poet Robert Bly and musician Mike Scott, along with one of his most thoughtful, lyrical songs, Call Mother a Lonely Field. It was ranked by Q Magazine one of the “best 100 albums of all time”. On other albums he was backed by former members of Doll By Doll, by his partner Deborah Greenwood, and by David Thomas of Pere Ubu. After finding that he was mentioned in one of Ian Rankin’s Inspector Rebus novels, he contacted Rankin, and the result was the stage show and 2005 album Jackie Leven Said (a parody of a Van Morrison song) in which a Rankin story is matched against Leven’s music.

Leven was himself a great story-teller, and delighted in teasing his followers. According to Goldschmidt, his much-publicised whisky brand Leven’s Lament was “a complete scam – new labels on old bottles”, and so was Leven’s claim to have written a song with Bob Dylan on a train to Moscow. He was a hugely likeable, larger-than-life figure, with a legacy of more than 400 songs, and I suspect his music will reach a wider audience still.

Leven was married twice, and is survived by Deborah; his son Simon, from an earlier relationship; and his sister, Wendy.

(I don’t actually have all that many songs, and most have come from compilation CDs or via internet.  This is from the 2001 LP, Creatures of Light and Darkness)