Edinburgh quartet the Spook School play a brand of indie pop that combines the hookiness of C-86 bands like Shop Assistants with the punky energy of the Buzzcocks, then adds lyrics that deal passionately with sexuality and gender.

It was followed by a single for Cloudberry Records later that year, which led to them catching the ear of the Fortuna POP! label. The indie pop mainstay signed the Spook School and released their first album, Dress Up, in 2013.

The album’s energy and raft of catchy songs earned them a burgeoning following and a slot at the 2014 N.Y.C. Popfest. That same year, their shared love of sketch comedy paid off with the band being invited to do the music for the second season of the BBC Three show Badults.

The band’s second album further explored gender identity. As Nye began testosterone therapy, his voice started changing subtly as the recording process continued. Try to Be Hopeful was issued in October of 2015, again by the Fortuna POP! label.

The group’s next appearance on record was Continental Drift, a split LP on Fortuna POP! and Slumberland that also featured songs by the Mercury Girls, Wildhoney, and Tigercats. After the 2017 holiday single “Someone to Spend Christmas With” on their new U.K. label, Alcopop! Records, the Spook School came back in early 2018 with their third album, Could It Be Different? The record addressed abusive relationships, gender issues, Brexit, and the struggle of staying alive in the modern world.

My very good friend Aldo championed The Spook School from the outset, seeing them on many an occasion across Scotland and further afield.  I was, alas, very late to the party, only catching them on a couple oof occasions around the promotion of that third album, which proved to be their last.

The Spook School have announced that they’re breaking up. The Scottish four-piece will embark on a final tour through the UK in the summer, wrapping up in Glasgow in September.

The band has been together since 2012. They’ve released three full-length albums in that time: 2013’s Dress Up, 2015’s Try To Be Hopeful, and 2018’s Could It Be Different? They wrote giddy, ramshackle indie-pop songs about identity and self-discovery and finding a supportive community to call your own. Here is the goodbye message:-

We have an announcement.

This year will mark the end of the project known as The Spook School. Whilst it is incredibly sad we really want to look back with joy on this journey. It’s easy to forget all the things we managed to achieve with close to zero knowledge of how the music industry works (we still don’t really understand a lot of it!).

We started as friends and we are ending the exact same way. We still love each other and in the future we will continue to work together on creative projects but real life has a habit of getting in the way and eating up time and energy. We just can’t devote ourselves to the band the way we want to anymore and we would rather go out with a fanfare than let The Spook School drift quietly away.

We have achieved so much more than we ever thought possible and we are so, so grateful for everything we got to experience. We have met so many people and seen so much of the world that would have remained hidden from us if it wasn’t for this band.

It has been 8 years, 3 albums, countless silly covers, hundreds of adventures, and one highly unofficial endorsement from Linda McCartney’s Vegetarian Sausages. We will never forget our time as The Spook School.

Finally, we want to say thank you to you. Thank you for your support, it truly has meant so much to us. We are full of self-doubt and constantly questioning ourselves and to have such positive people coming to our shows and listening to our music is infectious. We have written about incredibly personal things and that sense of community and of having a support network has been so beautiful. If our music has made even the smallest positive contribution to anybody then we can be exceptionally proud.

It has been a pleasure and a privilege to play for you.

Lots of love and always try to be hopeful,
AC, Adam, Nye and Niall

I’ve picked up all three albums and there are some magical moments on each of them.  I thought the best thing today would be to offer up one track from each of them.

Warning….the last of the above tracks has a sweary sing-a-long chorus.

The sixth year of the SAY Award and I keep my 100% attendance record. As ever, delighted to make it along and I’m in the company of Aldo. I see a few well-known faces who I manage to say hello to, some involved in the music industry, others who have become friends in recent years from this blogging lark. Someone I know happened to be talking to Stephen Pastel and so I politely barge my way in just to say thank you to the pop star for making Teenage Superstars such an enjoyable view. Turns out Stephen hasn’t seen the finished version nor indeed any of his own contributions. As ever, I come away from a few seconds in his company amazed at his modesty and the fact he doesn’t ever seem to understand how so many of us are in awe of him.

Last year’s winner Anna Meredith gets things off to a decent start before The Spook School take to the stage and deliver a 15-minute mini-set that channeled the energy and fun of Buzzcocks when they were at their peak. 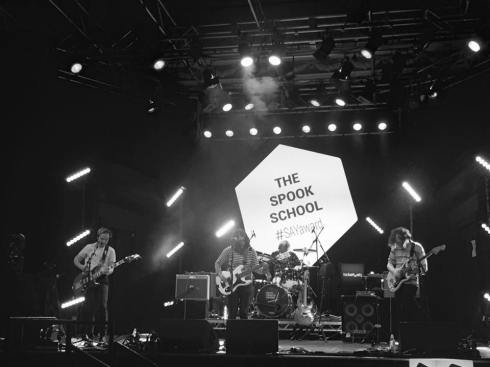 mp3 : The Spook School – Books and Hooks and Movements

The next two acts to perform didn’t do anything for me so I won’t waste time writing about them.

The night ends with the announcement that the 2017 SAY Award is to Sacred Paws for Strike A Match. I’m pleased as it is a record I’ve gotten a lot of enjoyment out of since its release back in March but it wasn’t the one from the long list of 20 and then the shortlist of 10 that I’d have put my money on.  Rachel and Eilidh were thrilled and stunned in equal measures when told they were to receive the £20,000 prize.

Regular readers will know how much I love the work of Adam Stafford.  There was no way I was missing out on the launch of his latest piece of work, Reverse Drift, which has just come out on the local indie label Gerry Loves Records.

It’s an ambitious piece consisting of a 40-minute piece of improvised music that was recorded live in one take with no overdubs featuring just a synthesizer, a sequencer, some effect pedals and Adam’s occasional vocal, along with a 48-page book containing photos he had taken over a period of eighteen years, between 1999 to 2017, mostly of landscapes in and around his home town of Falkirk.

Adam announces that as Reverse Drift was wholly improvised on the day it was recorded, he won’t be playing any of it at the show to launch its release!  Instead we are treated to 50 minutes of new, mostly instrumental music. Just one man and his guitar, foot pedals and various effects mics and made for an unforgettable and special evening. He’s hopeful that the music will be recorded in October this year for future release. It was everything those of us who like Adam have come to expect and appreciate, but it had added anger and energy that translated the music into gothic landscapes. Something to look forward to in the months ahead. In the meantime, here’s a lovely nimber that was an outtake from his 2015 LP Imaginary Walls Collapse

It’s a song that features a vocal contribution from Siobhan Wilson who herself was launching her latest album the following night in Glasgow, an event I’d have gone along to except it clashed with something else….

This was a huge surprise.  The 1,500th posting on the blog a few weeks back was an ICA featuring The Skids. I lamented that I had missed their show in Glasgow as they embarked on a 40th Anniversary Tour but I hadn’t minded as it had clashed with the bloggers’ weekend and the unforgettable hook-up with Dirk, Walter, Brian, Adam and many others.

I took a call from Mr John Greer, past contributor to these pages, saying that he had come into possession of four tickets for the band’s long sold-out gig in their home town; not only that, but it was part of a package that had been bid for at a charity event that enable the ticket holders to attend the sound check and have a meet’n’greet with the band. There was also some food and drink at a nearby pub thrown in (but not with the band!!)

I was thrilled to be invited along as one of the guests, mainly as I was keen to see the band on the back of consistently great reviews on the tour, but especially for the fact I would meet a long-time hero.

Yup. In a year that is proving to provide all sorts of wonderful first-time happenings, this was right up there.

The gig could have been an anti-climax but that was far from the case. In front of a manic but brilliantly behaved 600-strong audience in the splendour of the art-deco Glen Pavilion (another new venue for me), Richard Jobson and co really did turn the clock back. As he said, in his head he was on the stage still thinking he was a 16-year old punk looking out at an audience of 16-year old punk music fans – fat and bald 16 year olds for the most part, but still determined to singalong and dance away as if there was no tomorrow.

The set-list was majestic:-

Charade
A World On Fire
TV Stars
Of One Skin

Yup….they ended with a song they had aired before as they didn’t want to leave the stage. I’ve no idea just how these old troupers managed to keep up the sort of energetic pace throughout the near 100 minute set. It was sweltering hot from the word go but not once did any of them appear short of breath. Richard Jobson remains a front man who so many could learn from – utterly charismatic, witty and performing throughout with the widest grin imaginable. It was wonderful.

mp3 : The Skids – The Olympian

Lazy day to recover.  Was able to reflect on a few personal things such as my parents celebrating 55 years of marriage earlier this week, my many Canadian friends today celebrating 150 years of theirs becoming a country and the fact that one of my younger brothers would have been 50 years old today if he hadn’t passed away in a car crash in 2010.  I toasted his memory as I recharged my batteries

Sunday 2 July : Edinburgh, world premiere of England Is Mine

Once again, a late and unexpected invite courtesy of Mr John Greer as the 2017 Edinburgh International Film Festival comes to an end with the screening of England Is Mine:-

For all that the subject matter of the film is an utter twat these days, there was no way I was missing out on this invite. I’ll be on my way east as these words are posted.