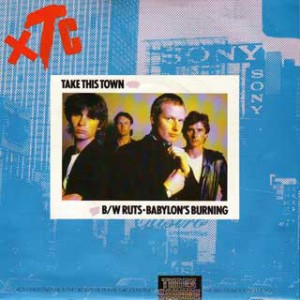 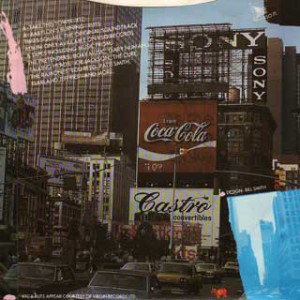 Just as Towers of London was beginning to fall out of the charts a very peculiar decision was made regards the next single in November 1980.

A film called Times Square had just been released. It was not a critical or commercial success and you can read about it here. It’s not one I imagine many people can recall.

The film was accompanied by a 2xLP of 20 songs with what was mostly a mix of new wave and chart acts, mainly from the UK but also featuring NYC acts such as Talking Heads and The Ramones, and as part of the efforts to promote the movie and the soundtrack it was decided to issue a 7″ single. The tracks chosen were by XTC and The Ruts. The strange thing being that the XTC song was one that wasn’t available anywhere else while The Ruts effort had been a Top 10 hit only a year or so previously.

That it was released while the band were in the middle of their efforts to promote Black Sea seems baffling but then again it was a track that had been given to the film project some time previously and neither XTC nor Virgin Records were in charge of the timing of the release of Times Square.

The single was a flop. It’s not the band’s finest moment and was also out of step with much of the material on their new LP, albeit there was a hint of the ‘whistling’ that had helped make Generals and Majors such an enjoyable tune.

Worth saying that the song by The Ruts is still one of the best songs of the immediate post-punk era.

The Ruts had scored a well-deserved top 10 hit in the summer of 1979 with Babylon’s Burning and in doing so demonstrated that they were no minor-league tribute to the big boys of the London punk scene. They were a band much championed by both John Peel and David ‘Kid’ Jensen on BBC Radio 1 for whom they recorded a total of three sessions in advance of becoming chart stars.

The follow-up single arrived in August 1979 and listening to it all these years later you can hear a huge similarity to The Skids while the b-side, featuring a Peel Session track, is eerily reminiscent of the sound that had propelled Watching The Detectives by Elvis Costello & The Attractions into the charts.

It’s no real surprise in either case. The single was produced and arranged by Mick Glossop who just a year later would work with The Skids on their masterpiece The Absolute Game while the b-side highlighted the influence that reggae and dub had on the punk movement.

The Ruts were a band who really deserve a lot more praise than was given them at the time. They certainly lived in the shadow of The Sex Pistols and The Clash and looking back they may have been championed a bit more if they had been a provincial band. The contribution of Mick Glossop as a producer also gave them a cleaner and more polished sound than many of their contemporaries while the fact this band could play actually play their instruments with a degree of style and professionalism probably counted against them in the eyes of the music paper critics and writers.

Whether they would have enjoyed a decent and lengthy career is of course a moot point given the death of lead singer Malcolm Owen, from a heroin overdose, in July 1980 at the tragically young age of 26.