A GUEST POSTING by THE SWEDE 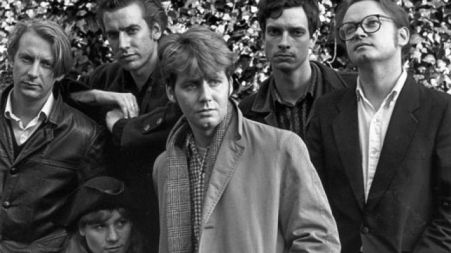 I don’t remember exactly how many times I saw The Triffids live, around fifteen I’d guess, but I do know that the first time was in a sparsely populated, subterranean, Romford night-club in 1984. Also in attendance that night was early champion John Peel. By 1989 I’d seen them headline prestigious London venues such as The ICA, The Town & Country Club and both The Shaw and Dominion Theatres. The world, it seemed, was their oyster, but despite critical praise and a devoted fanbase, the mass sales, required by major label Island, never materialised and the band drifted back to their native Australia, then drifted apart.

In May 1994 David McComb returned to the UK to play a handful of shows in support of his only solo album, ‘Love of Will’. I caught McComb, accompanied by his band The Red Ponies (featuring a pre-Bad Seeds Warren Ellis on psychedelic fiddle), in a cramped and sweaty Borderline, where they played a blistering set, comprising tracks from the solo album, classic Triffids material and well chosen covers from the likes of The Velvet Underground, Ray Charles, The Beatles and Prince.

It’s almost too heartbreaking to dwell on David McComb’s subsequent fate for too long. After undergoing a heart transplant at the age of 33, his final three years were spent plagued by ill health and personal demons. He recorded more music, but much of this remains officially unreleased. David died on February 2nd 1999, two weeks short of his 37th birthday. Gone, but never forgotten. (JC adds – this ICA has been timed to coincide with David’s birthday – he would have turned 56 tomorrow)

The Triffids left a towering body of work and selecting just ten pieces from it for this compilation has been a painful task. I’ve attempted to showcase the band’s versatility, from the snappy pop of ‘Beautiful Waste’ and ‘Trick of the Light’ through to ‘Lonely Stretch’ and ‘Stolen Property’, altogether darker offerings that often became even more intense in concert. I’ve also tried to make it a damned good listen. I hope you enjoy it.

(I’M CLEARLY STILL NAVIGATING MY WAY ROUND WORDPRESS……I HAVE NO IDEA WHY THE POST AS WRITTEN BELOW DIDN’T GO UP AS PLANNED AT 6AM THIS MORNING…..)

I mentioned yesterday that the one of the hopes in starting the blog was to give folks the opportunity to listen to some cracking b-sides that were difficult to find in a digital format.  That and to offer up some unusual cover versions as that’s a genre I’m a bit of a sucker for.

Today’s posting is another that draws on the September/October 2006 TVV archives, offering said b-sides and covers as well as being what was asked for by a couple of folk who left behind comments  as this is a place where the public gets what the public wants…..

As I said all those years ago, an awful lot of bands (and singer/songwriters) are fond of recording songs made famous by other people. Most of the times, there is a distinct failure to improve on the original version, or even more sadly, the cover version is pretty much indistinguishable from the original version.

Of course, it’s all subjective. You could be a huge fan of someone and regard any attempt at a cover version as sacrilege. But I prefer to try and be open-minded about it.

I’ll willingly admit to being a fan of the Pet Shop Boys. They have consistently put out fantastic records over the past three decades – and have often been at the cutting-edge of change, whether on vinyl or CD or in the visual aspects of being a pop star.

But there’s a few great versions of their songs that have been recorded….including these two versions of Rent.

The Triffids were from Australia. They formed in 1979 but were unheralded outside their native land for quite a few years. A handful of singles and EPs pre-dated their first LP in 1983. They soon moved to Europe, and throughout the 80s released critically lauded record after critically lauded record without ever gaining any commercial success. The band broke up in 1989 and the music industry was a sadder place. It got even sadder in 1999 when the band’s lead singer and creative force, David McComb, died just three years after undergoing a heart transplant.

Their cover version was recorded in September 1988 for a BBC Radio 1 session and made available as the b-side to the single Bury Me Deep In Love:-

Carter the Unstoppable Sex Machine burst onto the scene at the end of the 80s, and for maybe four years could do no wrong. Their first three records sold well and concert tours sold-out pretty quickly. But as the band’s lyrics got a bit darker and the tunes less radio-friendly, the fans, and to a certain extent the critical acclaim, faded away. Jim Bob and Fruitbat finally called it a day in 1997. As when The Triffids broke up, the music business was a far sadder place.*

*since the original 2006 post, the boys have had the occasional get together again and while the music business is still a sad fucked-up place, Carter gigs do help make things seem better.

While I’m on the subject of b-sides, this was the very first song ever featured on TVV:-

We’ve all got our favourites….great songs that were only ever recorded as B-sides. This particular offering is more wasted than some. It was put on the reverse of a mix of a single at a time when record companies issued multi-formats in an effort to boost the chart placing. If you ever see a copy of  Come Home (Extended Flood Mix)  in a purple sleeve, you’ll find Fire Away as the b-side. It’s a pulsating effort that’s difficult note to dance to. I should also mention that the mp3 made available with this posting is one made earlier today and I’ve eliminated the skips and jumps from the previous recording (I’ve a better turntable than I had in 2006).

Just a few weeks later, another James b-side was featured, and this was a cover (and some!)

It came from the single Lose Control in 1990 and I particularly love how Tim Booth throws in loads of Velvet Underground song titles as the tune reaches a crescendo. Fabulous.

I thought I’d finish with something that wasn’t part of the posts back in 2006 and that’s the other track The Triffids recorded for the BBC Radio 1 session.

And you can dance…..for inspiration.