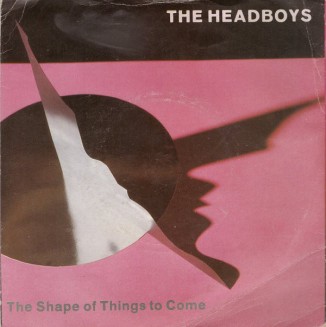 I have a digital copy of this song, which I downloaded from somewhere at some point over the past twelve years:-

mp3 : The Headboys – The Shape Of Things To Come

I did so as this 1979 single was one that I bought back in the day. It long has a place in my collection as being the cheapest brand new 45 I ever purchased, costing me 5p from the bargain bin in Woolworth’s.

Probably on the basis of this anthemic and catchy song, they inked a deal with the RSO label which, thanks to the Bee Gees, was as big as any at the time. The single got loads of airplay but only sold enough to reach #45 in the charts, but such was the power of their label this ensured an appearance on Top of the Pops.

I wasn’t a great lover of the record but at 5p it appealed to my sense of patriotism to rescue one of the many copies from the bargain bin. I’m guessing the store manager, perhaps having seen the TOTP appearance, thought there would be a run on the single straight after.

The band’s subsequent singles and debut LP went nowhere and so it is fair and accurate to say that The Headboys were very much a one-hit wonder, and a minor one at that.

Calum Malcolm would, however, go on to enjoy a long and succesful career in studio production and engineering, working alongside a varied roster of artists in Rock, Pop, Classical, Jazz and Traditional music initally at Castlesound Studios just outside of Edinburgh, a venture he himself founded in the late 70s, and more lately at his new studios.  He was involved in just about all of the early Postcard recordings……