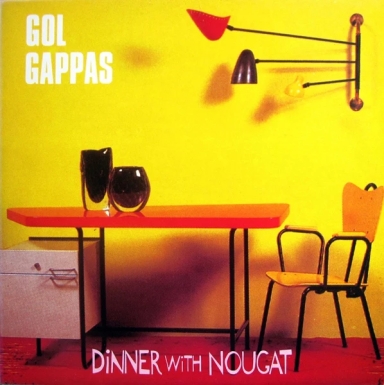 So….this one opens with a ba-ba-ba-ba-ba-ba refrain that Julian Cope would have been proud of.  It then has the little burst of jingly-jangly guitar that will have you bursting with joy before the blackest of tales unfolds.

I’ve got this one, which was released in 1986, courtesy of it being track 4 on disc 4 of the Scared To Be Happy retrospective box set. From the accompanying notes:-

“Another mysterious el Records signing by Mike Alway, Gol Gappas were named after a popular Indian snack.  They issued just two singles. The ‘Dinner With Nougat’ 12″ EP boasted the whimsical, Robin Hithcock-ish psychedelia of ‘Albert Parker’ and the vaguely Mary Chain-like fuzziness of ‘Saint Lucy’. Second single ‘West 14@ was more straightforward yet poignant pop. Its B-side, ‘Roman’, was remixed for a French-only single (backed again by ‘Albert Parker’) on Vogue in 1987.  Amazingly, ‘Dinner..’ was issued as a CD EP in Japan. The band were formed by singer Nick East and guitarist Colin Roxborough, both previously with Hounslow post-punk outfit Scissor Fits (for whom Alway was an occasional writer), who released two singles back in 1978/79.”

As it turns out, the Saint Lucy track was included in the Cherry Red C87 box set:-

The C87 booklet adds the snippet that Saint Lucy is a tribute to a medieval, Sicilian virgin who allegedly married God.

So there you have it.