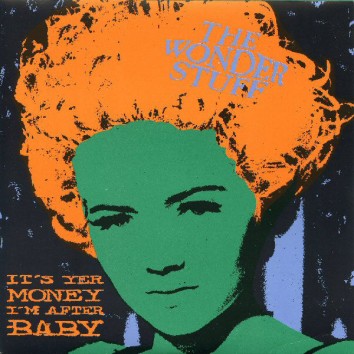 This was the fifth single by The Wonder Stuff and the first to trouble the charts, sneaking in for the one week at #40. But 13 out of their next 14 singles all hit the Top 30 in the UK, including a #1 hit with Dizzy, a collaboration with comedian Vic Reeves in October 1991.

It’s easy to forget nowadays just how massively popular this lot were at the beginning of the 90s…..at one point they headlined a gig with almost 20,000 in attendance at Walsall football stadium near their own home town. It’s also a scary thought to realise that this bit of vinyl is now more than 20 years old.* (it’s actually 30 year old now!!!)

Even if you’re not a fan, have a listen to one of the b-sides for its inspired attack on the pop-tastic machine that was Stock, Aitken and Waterman. Poor little Rick Astley…….

I’m sure you’ve all received at some point via social media an invitation from a friend to share your tastes in music with the watching world. One of the  things doing the rounds a few months back was a request to simply post the sleeve of an album you were particularly fond of without any need to say why that particular piece of plastic is so important to you.

It’s very tempting to bring that concept to T(n)VV by posting a picture and hoping that the many talented contributors would then, in effect, write the piece via the comments section. Especially on those occasions when time is against me doing the usual thing. But I won’t.

It was interesting to see some of the responses – the majority of folk put up the sleeves that you’d expect, the timeless classics and ground breaking albums. Some however, showed off a little by featuring records that sold poorly, are not well known and in all honesty are defined as ‘cult’ when the real word should be ‘shit’.

Then there were those whose choices might have raised a few eyebrows as surprises….the sort of release that would be classed by the majority as solid lower or minor league fare but in the eyes and to the ears of the individual contributor really is an album worth shouting about.

I think Hup, the sophomore 1989 album from The Wonder Stuff, would fall into that category.

The band had been snapped up by Polydor Records on the back of a well-received self-financed EP, backed by a lot of positive media who were always happy to talk to the highly-opinionated but erudite front man Miles Hunt. Their debut album from 1988, The Eight Legged Groove Machine, went Top 20 in the UK despite none of its four singles doing all that much. The songs were short, snappy and catchy, leading to many a comparison with early Buzzcocks. They were just as energetic and infectious on stage – every show saw every audience members leave at the end of the night bathed in sweat from their own exertions.

The single which preceded the release of Hup is regarded by many as the band’s finest three minutes…..or four minutes forty five if you take in the 12” extended version.

mp3 : The Wonder Stuff – Don’t Let Me Down, Gently (extended)

This went Top 20 in the singles chart in September 1989, paving the way for the album the following month to crash in at #5.

But here’s the thing….Hup was a long-way removed from the debut album. It opened with a song that sampled dialogue from movies and tv shows which then went into something clever yet mid-paced.

Other songs featured fiddles and banjos while, #gaspshockhorror, there was even a ballad.

It was a big leap forward and it caused many old fans to turn their backs and seek out alternative bands who relied on a rough, raw energy; it also soon led to a parting of the ways with Rob ‘The Bass Thing’ Jones deciding this folksy, rootsy chart friendly sort of stuff wasn’t becoming of a genuine hellraiser, leading him to quit at end of the 1989 tour after which he would move to America before his lifestyle caught up with him and he died of heart failure in 1993.

I’ve a lot of time for Hup. It was an album that was difficult at the time to categorise as it had a little bit of everything. Many of the bands contemporaries had strayed into ‘Madchester’ territory, mimicking the sounds and grooves of the chart bands but the Stuffies had, certainly at this point in time, avoided that temptation. The second single lifted from the album was incredibly radio friendly but anyone who was only familiar with the debut material would have been hard pushed to identify them correctly:-

To give the band a bit of credit, they actually put this out as a double-A single with an otherwise unavailable track on the flip side:-

mp3 : The Wonder Stuff – Get Together

This wasn’t however, an original number; instead it was their version of a a pro-peace/anti-war single from the 60s that had since been covered on many an occasion by acts as diverse as Jefferson Airplane, the Dave Clark Five, Andy Williams and Louis Armstrong. Part of the lyric would later come to the attention of the record buying public as the sung/spoken introduction to a track by Nirvana………..

Golden Green/Get Together was only a minor hit and didn’t give the album that anticipated spike in sales. It also nixed the idea of lifting a third single from the album which in a sense was a good move as it allowed the band to move on, but which prevented some decent songs becoming better known:-

The first post-Hup release in May 1990 also caught folk out as it slammed straight into the Madchester territory that they had so carefully bypassed the previous year:-

The title of the track on the b-side made me smile. 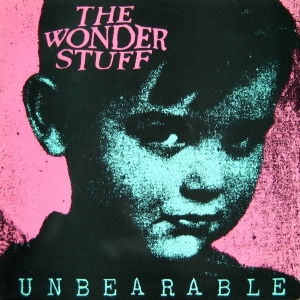 It was back in 1987 that a new band from Stourbridge in the heart of the Midlands in England came to critical prominence through the release of two singles on their own Farout label. The second of them featured a cracking sing-a-long chorus referred to in the title of today’s posting:-

The Wonder Stuff signed with Polydor Records not long after and over the next six years went on to enjoy a great deal of success with four Top 10 albums and a bundle of hit singles including a #1 hit when they backed Vic Reeves on his remake of Dizzy in October 1991.

But with the success came the critical backlash and there was a feeling among the band that it wasn’t much fun anymore. Much of their enjoyment in the early days came from the live performances and having caught them of an evening at the Glasgow Barrowlands in 1989 I can vouch for how good they were – it was a frenzied, boisterous and incredibly entertaining night – but as the venues got bigger and the set lists had to become centred around all the hits (especially the one that wasn’t really theirs) there was a sense that it was all getting a bit routine and treadmill like.

They called it a day in mid 1994 and closed with a headlining set at an outdoor festival in front of 30,000 fans. Three months later Polydor issued a best-of album that went Top 10 and promoted it through the re-release of Unbearable, including the original b-sides as well as making a second CD available with the re-recorded version of the song that had appeared on The Eight Legged Groove Machine, the debut LP back in 1988:-

By the time this post appears. I’ll have been in Lanzarote enjoying what I hope will been a few days in the sun with Mrs V.  Not due to get back to Glasgow till late on Thursday night, so for the rest of this week as I won’t be able to check in on the blog I thought I’d re-post some of the stuff that has been retrieved from told place (probably got about 20% of the 2,500 posts).  From December 2006:-:-

WHO WANTS TO BE THE DISCO KING?

Now I haven’t taken any artificial substances or stimulants to keep the happy posts going (my secret for this one is to type it out on Sunday night and hold it as a draft till the morning – it’s well-known I’m incapable of human interaction on Mondays for at least 4 hours after wakening up).

As a young teenager, I loved disco music – Earth, Wind & Fire, Donna Summer, Chic and all the rest of it. I loved getting out of the chairs at the side of the local church hall and getting on to the floor that doubled up as a badminton court on other nights.

Even as I moved on into the world of white-boy indie guitar bands, I still had a notion to shake various parts of my body in darkened dens of iniquity on suitable occasions. Or even just at the annual works Xmas party – and I know you’ve all got David Brent images in your head just now but I promise it wasn’t like that.

For a while, I even organised and ran the music at annual office parties – and I was therefore able to get maybe 20 minutes of the night where I could play stuff that I really liked. And I remember playing this and enjoying the moment as the floor emptied save for myself and one other single male colleague. Strange thing is, a woman in the room was so entertained by his performance that they soon got hitched and are now happily married with 2 great kids.

Me?? I was coming out of a messy separation and was rejoicing in my first Xmas with a new love in my life. She became Mrs Villain and even now forgives my forays into dance and disco music.

I must have been a lot fitter back in the early 90s – the song goes on for more than 7 minutes – I’d most likely damage a hamstring muscle if I danced to this in 2006.

For Jazf, Anna, Clara & Grace.  Great friends for so many years.

Still great friends with Jazf and his family – indeed I’d go so far to now say he’s my best mate and we’ve had loads of great times, particularly at gigs and football matches for well over 20 years now.

Jazf would later take up my pestering and become a regular contributor to the old blog under the moniker of Jacques the Kipper.

Bonus song from where I stole the heading for the post:-

mp3 : The Wonder Stuff – Who Wants To Be The Disco King?