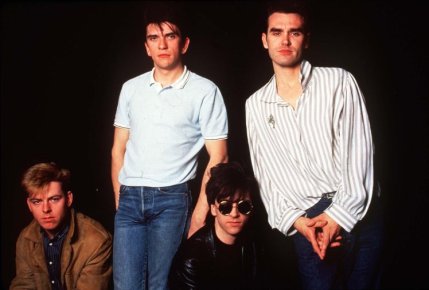 The first ICA was 19 June 2014. It featured The Smiths. Little did I know how popular the series would become or just how many fantastic guest contributions it would result in. Now that the series has hit #150, allow me a little self-indulgence with a long-overdue Volume 2:-

To me, the great single that never was. There are some critics out there who feel the tune is let down by a trite and simplistic lyric. Maybe it was one that Morrissey wasn’t completely convinced by and so it ended up initially as the extra track on the 12” release of Heaven Knows I’m Miserable Now. It was one of the first of the second batch of songs that fans got to enjoy (i.e. it wasn’t on the debut album nor had it been aired on a BBC radio session) and to those of us who liked to throw ourselves all over the student union dance floor, it was deemed an instant classic. It’s still one that I love to air whenever I’m lucky enough to be putting together playlists for club nights. The lengthy instrumental introduction set a standard for indie music that very few, if any, matched over the remainder of the decade.

2. The Boy With The Thorn In His Side

Released in August 1985. One that annoyed me back in the day for the heinous crime of having a promo video. Morrissey’s multiple statements from 1983 that The Smiths would never make a video to accompany any 45 had meant a lot when they were uttered. In an era when big-name bands were on what seemed like a suicidal mission to outspend one another on lavishly filmed features complete with nonsensical storylines in which the musicians were free to deploy abysmal acting and lip-synching skills, that my band were different was something to be proud and boastful about. I was such a sensitive prick in those days.

I also felt, back in the day, that this was one of the weaker tracks on The Queen Is Dead, mostly as there were so many other songs that would have made better 45s. As time has gone on, it has become one of my favourite numbers in the entire back catalogue – it’s one of the best examples of Johnny Marr’s quietly understated guitar work that is perfectly complemented by a gentle and whimsical vocal delivery.

This didn’t make the first ICA? Really???? It seems not……

Just to be different, I’ve gone for the ‘London’ version of the song. Worth mentioning that Johnny wrote the tune, partly as a response to being slightly jealous that Aztec Camera were enjoying chart success. The London version was the first stab at cutting the 45 but was discarded for version recorded a few days later back up north in Stockport. There’s a great on-line description of the song which states “Early Elvis would have approved of the music, Wilde of the words”. Wish I’d thought of that back in the day.

It was tempting at this point, having gone Girl, Boy, Man to launch into Wonderful Woman, and then perhaps complete side A with a name check for Jeane, Sheila,William or Mr Shankly. But I take these things seriously!!

Ballads were important to the band and their fans; the quality of the slow songs, from the very beginning, marked out just how special and unique The Smiths were. This was only kept off Volume 1, by the very slimmest of margins, by Last Night I Dreamt That Somebody Loved Me. I sometimes look at ICA1 and think I might have got it wrong. But only sometimes.

5. You Just Haven’t Earned It Yet Baby

One of the songs that benefitted from there being a fifth, temporary member of the band in the shape of Craig Gannon. It’s one that was initially thought of as a possible single in 1987 but had such a spectacular fall from grace in terms of the politics of the band that it was never ever performed live nor featured in any radio or TV performances. Johnny, realising that he had written something rather special (again!!) was more than happy to return to the studio the following year and contribute to a superb version by his good pal Kirsty MacColl. Even Morrissey would, belatedly, acknowledge its worth by including his own solo version within a live CD released in 2009.

1. A Rush and a Push and The Land Is Ours

The strange ghost story piano number that opens up the band’s final album is ridiculously camp, even by Moz standards. But it’s one of his best, and I’ve always considered the couplet “There’s too much caffeine in your bloodstream / And a lack of real spice in your life” as being laugh-out loud for all the right reasons. And having, at the time, just gotten through a rather messy break-up of my own, I empathised entirely with not wanting to mention love as I hated the pain and the strain all over again.

It’s a song that gives an indication of just where the band could have gone to with a sixth and subsequent studio LP is they hadn’t combusted so spectacularly.

In complete contrast, here’s Johnny wigging out big-style on the guitar. Fast, furious and as frenetic as a late-running Virgin Train West Coast Line service trying desperately to make up time as it speeds onto Euston. It’s two minutes of musical mayhem and it’s also one of Morrissey’s most clever lyrics as he faced up to his critics, such as the late Tony Wilson, who weren’t happy that the band had decamped south in pursuit of their career. I’m sure there was plenty of jealousy in the eyes of the ones who had to stay behind and look on as The Smiths churned out one great song after another. I’ve included the rarer John Peel session version in this ICA, not on the grounds that it is superior, but just because it seems only right to have it feature just ahead of something else that is different…..

3. Reel Around The Fountain

A website dedicated to all things Smiths/Moz provides the following info:-

“The song was written in the spring of 1983. It was first professionally recorded on 18 May 1983 for the band’s first appearance on John Peel’s BBC programme (first broadcast on 31 May 1983), with producer Roger Pusey. It was professionally recorded again in July/August 1983 at London’s Elephant Studios with producer Troy Tate during the initial sessions for the band’s debut album.

It was recorded again on 25 August 1983 for the band’s second appearance on David Jensen’s BBC programme (first broadcast on 5 September 1983), with producer John Porter. However, because of controversy, the song was banned by the BBC and this version of “Reel Around The Fountain” was not broadcast until two years later when the whole session was repeated on Janice Long’s programme.

The definitive version was recorded in mid-October 1983 at Pluto Studios in Manchester, with producer John Porter. Additional mixing was done during sessions in November 1983 at Eden Studios in London.”

A flatmate had captured, in high quality, that first Peel session and that was the version of the song that I knew so well by the time the debut album was released. It was a fragile sounding song that ran to almost six minutes in length and felt like nothing else that any other band had ever recorded. I’ve no idea how many times I ended up copying this onto compilation tapes over the summer of 1983 as I desperately wanted to share it with everyone. The studio version on the debut LP, which was much more polished and accomplished, lost something along the way.

I’ve therefore gone for the middle ground and fished out the lesser known Jensen session from August/September 83. It’s one that captures the band on the cusp of true greatness.

The Smiths weren’t strangers to the BBC studios, broadcasting on four Peel Sessions (May 83, September 83, August 84 and December 86) as well as two Jensen sessions (July 83 and September 83). A number of these performances, going back to This Night Has Opened My Eyes in 1983, became the only time they were ever officially released songs either as tracks on compilation albums or b-sides, thus demonstrating just how seriously they took such events and how, having felt the radio sessions couldn’t be bettered, they never really returned to them in the studio.

This is a close cousin to London in that Johnny plays very hard and fast while Andy Rourke and Mike Joyce work hard to keep up with him. Its inclusion in the set list for Morrissey’s frantic and chaotic solo debut in Wolverhampton in 1988, in which he was backed by the duo as well as Craig Gannon, has always seemed as s two-fingered gesture at Johnny as if to say that the band was capable of continuing without him.

Indeed they do. Another classic b-side from the early days. “The most inept that ever stared”. I love that line so much.  Substitute ‘typed’ for stared and that’s sometimes how I feel in 2017!