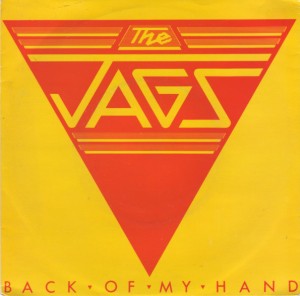 Adapted from a combination of wiki and all music:-

The Jags were a one-hit wonder of the late-70s UK power pop explosion. The quartet was formed in 1978 by the Yorkshire-based songwriting team of Nick Watkins (vocals) and John “Twink” Adler (guitar), with Steve Prudence (bass) and Alex Baird (drums). In July of 1978, they signed to Island Records and released a promising four-track EP.

Just over a year later, in September 1979, the single Back of My Hand hit the charts where it would hang around for ten weeks and reach #17.

Their debut LP Evening Standards was released the following year; it included the big hit along with its follow-up Woman’s World which spent a solitary week at #75 which I suppose means that, technically speaking, The Jags weren’t a one-hit wonder. The album featured a really solid set of punchy power pop songs, but critics focussed instead on Watkins’ Costello-like delivery, writing the band off as merely mimics. As steam ran out of the power pop craze, the band attempted to change their sound a bit. 1981’s No Tie Like the Present featured a slightly new direction, but it was generally overlooked. By 1982, the Jags had disbanded for good.

And here, picked up some years ago from a charity shop for pennies, in the good old days before vinyl came back into fashion, are both sides of the hit:-

It says on the label of this 45 that there was additional production from The Buggles; as such it must be one of the earliest songs worked on by Trevor Horn.

Oh, also to say that having my young brother and his family around these past few days while they are on holiday in the UK from Florida has meant I’ve not been on t’internet for the past 5 days.  I’ll try and catch up today…and that includes any emails that haven’t as yet been read far less replied to.