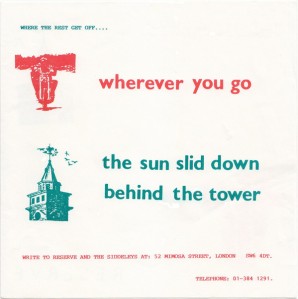 It was while scrolling through the hard drive the other week, sorting out the posting on Restricted Code for the Saturday series, that I gave another long-overdue listen to the one, rather excellent, song I have by Reserve, courtesy of it being part of the C88 boxset compiled by Cherry Red Records a few years ago:-

mp3: Reserve – The Sun Slid Behind The Tower

As the notes in the accompanying booklet explain:-

The Tower in question is within All Saints Church, Notting Hill, just around the corner from the Rough Trade shop where singer/songwriter Torquil Macleod placed ads to form Reserve. He worked initially helping Jonny Johnson (The Siddeleys) on her songs before Reserve were born in autumn 1986.

Band members came (from Bob) and went (to James Dean Driving Experience) before the luminous ‘The Sun Slid Down Behind The Tower’ appeared on a Sha La La flexi in 1987 (shared with The Siddleys), given away with Trout Fishing in Leytonstone fanzine. It then appeared again on Reserve’s only stand-alone release, 1988’s Two Hearts Beat In A Hole EP.

Given that I’m quite fond of the song within the boxset, I had a look online to see if there was any availability for the sole EP, which was released on the short-lived Sombrero Records, suspecting there wasn’t. It turned out I was almost right, in that there’s a couple of copies via Discogs, going for £50 (from Spain) and £75 (from Japan). Much better value is to be had from the CD compilation, Beneath The London Sky, compiled and issued by Berlin-based Firestation Records back in 2013, but alas, nobody is selling a copy just now. It contains 23 tracks, so I’m assuming that’s everything the label could get its hands on, including demos and live material.

The most expensive artefact is, however, the flexi issued with the fanzine back in 1987. One of eight such efforts to come out on Sha La La records, with the catalogue number of Ba Ba Ba-Ba Ba 006, and the asking price, including a copy of the fanzine, is £145! One for collectors only, methinks.

Some of you will recall that last October, there was a Siddeleys ICA, courtesy of Strangeways. He included the track which can be found on the flexi disc, offering this as his observation:-

It seems that back in the day The Siddeleys were dogged/blessed by comparisons with Talulah Gosh. Whilst, round these parts, this is pretty much the ultimate in accolades, it’s not really that accurate. This track could be the culprit. It does actually sound like Talulah. It’s a blast. But it’s not representative of the wider Siddeleys sound.

mp3: The Siddeleys – Wherever You Go

If anyone out there wants to offer up some thoughts on any of the other Sha La La flexidiscs, then there will certainly be space made for a guest posting(s).