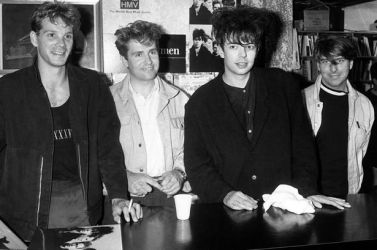 This one was composed at a cruising altitude of 35,000 feet initially above the Atlantic Ocean and latterly over the north-east corner of Canada as the plane headed ever closer to the city of Toronto.  The headphones were plugged into the i-phone and as I went through the songs I typed the words into its ‘Notes’ function from which I later did a cut’n’paste and edit.

Echo and the Bunnymen are still going strong these days, thirty-seven years on from their original formation. Well half of them are at least…..

They’ve made a lot of great music in that time but they’ve also released a fair bit of stuff that hasn’t quite hit the mark which, to be fair, is a sentiment that can be applied to almost any act which has been going for that amount of time.  I don’t think it will come as too much of a surprise to find that what I consider to be the perfect compilation focuses entirely on the early 80s when they were at the peak of their powers and could do no wrong.

Dark, brooding, intense yet ridiculously danceable….especially if you’re wearing your raincoat and the main shapes you’re throwing involving the shaking of shoulders. The opening track to what I consider their best album was always going to be the first song on this compilation.

You’re on the dance floor and you’ve got those shoulders nice ‘n’ loose by now. Well let’s see those hips sway and while you’re at it get the arms swinging above your head. The band put the word Discotheque in brackets after this one. Years later Bono and his boys pinched both the title and the tune in an effort to prove they were a meaningful and relevant musical act.

The sound of three musicians and a vocalist at the very top of their game with a song that in 50 or 100 years time will still have the ability to make those hearing it for the first time stop in their tracks and go ‘wow’.

Released originally as All My Colours but re-named with the one-word chorus when this stunning live version was put on the b-side of the 12″ of The Cutter.  The recording is taken from was a show at one of the earliest WOMAD Festivals back in 1982 which explains why the Royal Drummers of Burundi happened to be in Bath at the same time. It’s an incredible arrangement for a one-off collaboration and is the perfect demonstration of the fantastic arranging and drumming talents of the late and great Pete de Freitas.

If Postcard could claim to be the Sound of Young Scotland then those who came to prominence through Zoo Records are entitled to claim the same crown for Young Liverpool. This particular single could easily have been written and recorded by Wylie, Cope or The Wild Swans and it would have been equally majestic. Will Sargeant teased a ridiculous amount of stunning sounds from his guitar over these damn near perfect four minutes.

Critics of the band feel they got a long way on the back of one tune and one groove. But the thing is, when the tune and the groove is this divine why quibble? Yes, you might initially think this is ridiculously close to bring just a speeded up version of the track which closed the other side of this imaginary album but wait till you hit the two minute mark and get blown away by the psychedelic instrumental break…it’s still incredible to think that much of this album was written and recorded at a time when the band weren’t really on speaking terms.  Much of the sound can of course be attributed to a guest musician mentioned a little later on…

The fade in and slow build-up lulls you into a false sense of security that this is going to be a bit of a non-event. But then comes the catchiness of the simple chorus before Will’s attack on your aural senses and you realise that you’re listening to gothic atmospheric rock at its very finest.

And now you’re listening to indie guitar pop at its very finest, all the while jumping back on that dance floor for a bop…..or two….

……for with this piece of glory blaring out over the speakers nobody will want to vacate their spot under the glitter ball.  In 1983 I was convinced the band really were going to conquer the world for the simple fact that they not only made great records but they delivered what were blisteringly hot live shows….literally when the majority of the audience refused to remove their overcoats.  The sweat pours out of you when you wear an overcoat to a gig.  It’s the contribution of the Indian musician Shankar that really sets this single apart as can be evidenced if you listen to the original version which was rejected by the record label as being too uncommercial.

When this track first aired as part of a John Peel session in late 1983, it was a medium-paced but hugely enjoyable bit of indie-pop.  Somewhere over the ensuing months the band came to the conclusion that it would make for an epic ballad with which they should close their next LP.  It was a stroke of genius as it became the perfect ending to an album that had often taken you to very unexpected places with acoustic guitars, lush orchestrations and the frequent use of brushes on the drums, even on the fast and wonderfully explosive Thorn of Crowns, a track which just missed out on being part of today’s feature. And if Ocean Rain was the perfect end to that very album then I’d like to think it is equally the perfect end to the 40th Imaginary Compilation.

and just because I mentioned them earlier in passing:-

23 thoughts on “AN IMAGINARY COMPILATION ALBUM : #41 : ECHO AND THE BUNNYMEN”