It was around three years ago that Basil Pieroni of Butcher Boy handed me a demo of some tracks that had been recorded by Dead Hope, a three-piece band based in Glasgow. He was doing so on the basis that he thought I’d really like the tracks but also as a favour to his lifelong mate, Keith Martin, who was the drummer with this new band.

The demos were really good and it was really pleasing to be able to pick up a copy of their debut album, Songs From The Second Floor, released in September 2017 which offered ten tracks over 34 minutes of music that, while never groundbreaking was the sort which has never ever really gone out of fashion. It’s a blend of new wave and hard rock with the occasional hint of a catchy pop riff…the sort of stuff that seems to be the accompanying music to action shots in countless film and television programmes. I previously tried to sum it up by describing the songs as being in debt to Black Flag but in the way that the sound was later refined for radio consumption by such as Sonic Youth or Dinosaur Jr.

Live, the band proved to be truly dynamic, but that was hardly a surprise given that Keith, and his band mates Scott McCluskey (vocals/guitar) and Andy Crone (bass), had all been around the local scene for a while and weren’t a group of image-conscious youngsters worrying about looking cool. Their songs were played occasionally on BBC Radio 6, but the fact that the debut album was self-funded and self-released and, for the most part, only available via a bandcamp site prevented them being better known outside of this city and its immediate environs where every gig was a sell-out in front of really appreciative audiences.

Sadly, Keith Martin passed away a couple of days ago after a long and very brave fight against cancer, a fight that was kept quiet to most. It has been a real blow to his many friends.

I only knew Keith through others and wasn’t in his company all that often, but on those few occasions it was immediately clear to see why he was so highly thought of.  Many of those who grew up with him In Ayrshire or have gotten close to him in more recent years have taken to social media to reflect both on how influential he was and to offer their own personal memories and thoughts on a man who was highly intelligent, well-read and the most terrific of conversationalists. One of his oldest and closest friends has summed Keith up best:-

“Fiercely intelligent, tough, tender, hilarious, sometimes scary, socialist, loyal, a guy who would always stand up for what he believed in. He was all of those things but most of all he was a good pal…I’ll miss him and that wee glint of mischief in his eye.’

There’s a lot of sadness around just now, understandably so.  Mine stems partly from the fact that he’s been taken away just as his band was really gaining a head of steam, with genuine talk of one prominent indie label expressing interest in re-releasing Songs From The Second Floor and most likely providing the platform they really deserved. Keith Martin would have provided loads of great copy if he had been able to spend time in the limelight; as it is, only those fortunate enough to have been close to him during his cruelly cut-short life will have been able to fully appreciate just how poorer the world is today for his passing.

It was back in August 2015 that I gave a plug to Dead Hope, a new act to emerge out of Glasgow.

In doing so, I went against my practice of drawing attention to new and often unsigned bands, and it was very much on the basis that they had been recommended by Basil Pieroni of Butcher Boy who was friends with the three blokes who comprised Dead Hope. As I said at the time, Basil knows me well enoug, however, to realise that I don’t just put things on the blog as a favour to someone and so when he handed over a CD with the two tracks that made up the debut single, he did say it wouldn’t matter if I had a listen and filed it away.

It turned out that I really enjoyed the songs as they brought back memories of that warm noisy fuzzbox sound that was very fashionable for a period back in the 80s while there’s a hint of wonderful and much missed Urusei Yatsura about them too.

Two years later, in September 2017, Dead Hope got round to releasing a debut album, entitled Songs From The Second Floor. It contains ten tracks and takes about 34 minutes from start to end. In some ways, the songs are a mild variation on the one tune, but in all honesty, it’s a belter of a tune that stands up to repeated listening.

Dead Hope make music that hasn’t ever really gone out of fashion during my time in listening to and appreciating music. It’s that blend of new wave and rock with the occasional hint of a catchy pop riff that worms its way into your brain. I’ve mostly listened to the album on the daily commute as it’s the perfect length to take in stepping out of the door to walking into the office via two short train journeys across a 4-mile distance, and without fail, I’m tapping my feet and nodding along to songs that are guaranteed to lift any gloomy mood. As with most debut albums, some songs are most instant or memorable than others, but such is their brevity that the next one is along before you know it.

I haven’t had the chance to see the band play live yet, but on the basis of the album, I can see the drummer bathed in sweat from his exertions while bassist and guitarist will most likely having bleeding fingers from playing so hard and fast. The singer would surely be unable to talk for days without it sounding as if sandpaper had been applied to the back of his throat. It’s akin to the punk rock championed by the likes of Black Flag that was later refined for radio consumption by the likes of Sonic Youth and Dinosaur Jr.

It’s pleasing to read that Dead Hope have received some airplay on BBC Radio 6 as well as being championed by a number of DJs on community stations in and around Glasgow, and I hope that a few more pick up the songs in their end of year reviews.

The album is available via bandcamp, as a digital release for £4.50 or as a CD for £5, which strikes me as a bit of a bargain. You can also listen to all ten tracks to try before you buy. Click here.

Here’s a reminder of the debut single 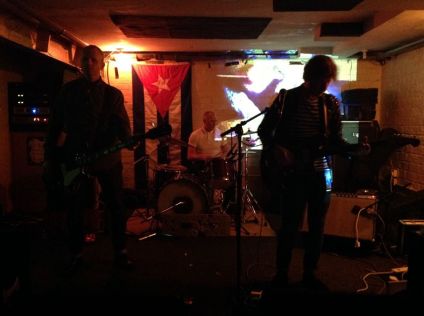 Dead Hope are a three-piece group from Glasgow.

They were initially brought to my attention by Basil Pieroni of Butcher Boy as he is good mates with one of the guys in the band who, many years ago, was also part of The Big Gun as featured previously in this series.

Back in August 2015, I was given a copy of a single by Dead Hope. I described it then as bringing back memories of that warm noisy fuzzbox sound that was very fashionable for a period back in the 80s while there’s a hint of the much missed Urusei Yatsura about them too.

I didn’t manage to ge along and see the band when they played some live shows to promote the single. I’m hoping they have some shows planned this year so that I can rectify things.

The VV inbox receives hundreds of emails each week with details of new and upcoming bands and singers. As much as I would like to filter through them and find those gems that might be of interest to T(n)VV readers I simply don’t have the time. And besides, most up and coming bands want to attract the attention of a young fan base whose social media skills will quickly spread the good word and the endorsement of a 52 year-old Peter Pan figure might actually count against them.

But I’m making an exception for today only and drawing to your attention demo tracks that have been recorded by a Glasgow-based trio named Dead Hope. The poster above I think is from their debut gig a few months back…its certainly just about all I could find to illustrate this post….and the band have been brought to my attention by Basil Pieroni of Butcher Boy who, as he admits, is friends with its members. Basil knows me well enough however, to realise that I don’t just put things on the blog as a favour to someone and so he handed over a CD and said it wouldn’t matter if I had a listen and filed it away. The thing is though, I do like what I heard:-

Both songs bring back memories of that warm noisy fuzzbox sound that was very fashionable for a period back in the 80s while there’s a hint of wonderful and much missed Urusei Yatsura about them too.

Turns out there’s a few other that like them too – Steve Lamacq played one of the songs on his BBC 6 show a couple of weeks back after receiving a copy of the demo.

Heres a link to the band’s Facebook page.  Feel free to drop in say hi to them.