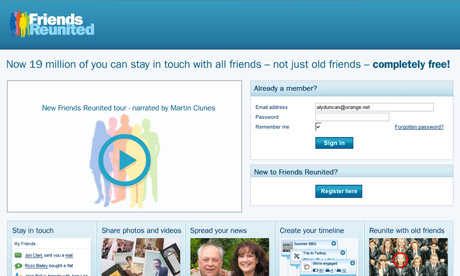 Here’s something else Dick van Dyke posted over at the old place back in June 2009:-

Is it me, or is ‘Friends ReUnited’ (and a hundred sites like it) a vacuous world of eavesdropping and one-upmanship? I mean, why, oh why, would you want anyone to know that you are now “Married (To Tracy) with 2 kids, a lumbering great mortgage and a hamster with terminal alopecia”?

And why pray tell, 20-30 years on, would you wish to be re-united with a ‘friend’ who boasts online (with photos) of his 13 foot dinghy, a Thai bride, and a timeshare in Playas de la Scunthorpe? (Bet he still has the ‘Scwewy Wabbit’ speech impediment though. Hah!) I mean, you thought the bloke was a complete cunto at school, so why would you wish to know of his subsequent adult success in the rowdy revolutionary world of soft furnishings?

Or of Maxine’s … ‘Divorced twice, 5 kids (left home). Now living with Trevor (as if you know him personally) and enjoy weekends at Dump Truck conventions in and around Caerphilly’.

So anyway, in my worst midnight post-cheese-on-toast nightmare, I can just see me now – meeting up at ye olde Smegma Comprehensive School for their ‘20 Somethingth Anniversary Re-Union Night’. ….

Pissing down with rain on a bleak Tuesday in late February. I deliberately park my 14 year old Nissan Gusto a full 800 yards away. The invite said 7.30, but I thought I’d sneak in unannounced at about 8.15.

Like a prize twat, I Pull instead of Push the heavy front doors. I wonder how I might get back home in time for the 2nd half of the Champions League game on TV. Then I hear Eddie & The Hot Rods from the Disco in the gym … and crack a half smile.

I was 16 when I last scuffed my shoes through these corridors. I didn’t have a past that could catch up with me. My mind wandered back. ‘You Boy. Keep to the left,’ growls the rampant Deputy Head – Leggy Hargreaves. ‘And tuck your shirt in, you insignificant little wretch’. Funny how the smell of rancid over-cooked cabbage still remains. Even though I still had my ‘life to live’, I recall just how dog-tired I felt with it all even then.

By the cloakroom, I catch my reflection in the glass of a near empty Trophy Cabinet. Belly-bulging Fred Perry over my ‘best’ jeans. Ever expanding forehead shining. Jowls like Deputy Dawg.

“Who the fuck is that?” I ask myself.

I’m collared by ‘Northern IT Guru of The Year 1989’ – Kevin Holdsworth – who is loud and proud and sporting a Devo T-shirt and inane greying goatee.

“I’m still that post-punk science fiction surrealist you know and love” he snorts. A trickle of adhesive saliva stays put in his beard.

“Did you know Basher Briggs was in prison?” Kevin announces.

“Remember how he never paid for his school dinners?” he continued. “Sneaking past dinner lady Doreen on her weaker left side; the side where she’s had the minor stroke and couldn’t see properly?”

“Oh, and remember when he smacked that effeminate lad who dressed as Ziggy Stardust?” Kevin bellows so much, his man-boobs quiver.

“Bust his nose he did. Covered his ginger quiff in blood and snot and purple make-up”.

I see a resplendent Miss Goodyear over by the rack of medicine balls. She was about 26 in 1979 and quite unrecognisable from the portly Molly Sugden figure she now cuts. Did she realise I wonder, just how attractive she was back then? As she flounced around the Art Dept caressing her coffee mug with both hands whilst wearing such unfeasibly tight trousers? Of course she bloody did! The camel toe which launched a thousand wanks. I wonder if she misses that long lost power which she held in the palm of her hand? Do Kate Bush, Agnetha, Debbie Harry et al still miss the teenage boys’ sea of .. adulation?

Evidently, in the year of Our Lord 2009, Miss Goodyear’s spottily cravatted and ‘distinguished’ husband Malcolm is Skipper at the Dewsbury Sailing Club. She says he’s trying to get Brotherhood of Man to perform at the annual Spinnaker Ball. Oh yes, he has contacts y’know; mostly through the KBC – the monthly networking Kidderminster Breakfast Commerce get-together. “And he’s a martyr to his IBS you know”.

“I wonder how he shits in a schooner when caught short?“ I hear myself thinking. Visions of him baring his arse to the choppy lake as his bowels rage are conjured up.

mp3 : The Specials – Do Nothing

Sidle up to the sad fucker who basks openly in his own mediocrity.

As I grab a handful of ‘nostalgia inducing’ Monster Munch, I see Sharon across the room. Her once long chestnut hair is now a thinning grey bob. Once bright, sparkling eyes are now dull, bespectacled and moon-stomped by crows. Pert breasts now spaniel-eared and spent. Should I pretend I haven’t seen her? Perhaps she will do the same?

The fact remains that hers was the very first errant hand in my underpants. Nonetheless, I can’t approach her now; not after all these years. Too much water under the bridge of sighs. Or as Sharon would no doubt put it, ‘Too Many Walls have been built in between us.’ I had to wash my own corduroy trousers that night – much to my mother’s puzzlement.

Dignity and embarrassment. Plus ça change ..?

I hear from a heavily tattooed love-god Dave, that 4th Former ex-‘bike’ Tricia Walsh has found Jesus – whilst she was working down at ‘Mr Bubbles’ Launderette. I also heard that Delroy – her skunkweed salesman boyfriend – has ‘found’ Wormwood Scrubs in the meantime. She prays for his rehabilitation. He continues to exchange Crack from the East Wing.

I check my watch as Blue Oyster Cult are introduced to the Steve St. Claire Disco decks. Mike Riley (aka Mavis) tells me that Tanya Wilcocks lost her circus acrobat husband last year in a bizarre trapeze accident. Her face is free from any colour and she visibly carries a wrung-out anger and bitterness which seems to be gnawing at her poor, empty soul. Why, she could crush that glass of Vimto with a single squeeze of her liver-spotted hand. Since the somersault tragedy, he tells me with added relish, she hates God and has rejected all religion.

“Best she keeps away from ex-bike Tricia Walsh and her freshly bashed bible” I whisper, as I sip on my can of warm Skol.

“Still a cynical fucker then, Dick?”

mp3 : Whipping Boy – When We Were Young

*Note from JC : I’ve included the demo version of the song that was made available on the Extras CD from 1992.  It has a sound and feel that seems more appropriate to the posting…

Not released on an indie label but very much an indie band.

Whipping Boy formed in Dublin in 1988 and started out in life as Fall covers band. In 1992 they released their first album Submarine and then signed to the Columbia Label. In 1995 they came to the attention of a wider audience with the release of Heartworm their second album.

It is from this that We Don’t Need Nobody Else was taken. It’s a brutal episode of love, betrayal and heartbreak with singer Fergal McKee at first speaking over the wall of guitars in the back ground, then getting angrier and angrier. There is one verse in the song that makes your hairs stand up on end and genuinely made me shiver it’s the bit where Mckee says

“I hit you for the first time today, I didn’t mean to It just happened You wouldn’t let me go to the phone, you wanted to make love and I did not Now I know the distance between us Christ we weren’t even fighting, I was just annoyed”

Is it misogynist? No, well probably not. What it is, is a raw and emotional account of a love lost. Follow the song through, you’ll understand. Listen to A Natural, the very last (hidden) track on Heartworm and it all becomes very clear, well it did to me. To me, this identified how music can be a very powerful thing, in fact it can tear your heart out whilst you sing along. Lyrically this song is as beautiful as anything I have ever listened to and yet they are not the household names they should be.

Is it a cult classic? Yes it’s the very definition of a cult classic, it scraped the Top Fifty. The album is better received now than it was 18 years ago. The band had very little success when perhaps they should have been megastars, Heartworm was recently voted one of the greatest Irish Albums of all time, I would lose the word ‘Irish’ there myself.