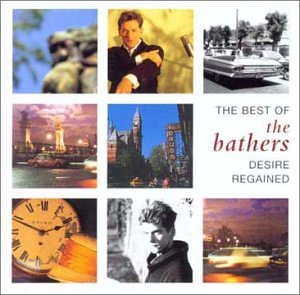 Some of you may be wondering how it is possible for a band as little known as The Bathers to have experienced the release of a ‘Best Of ‘ compilation.  The answer partly lies in music label politics…

The Bathers are really a front for the singing/songwriter talents of Chris Thompson, a man whose work I have admired and adored since the early 80s and the emergence of Friends Again.  His indie-pop band had lots of fans in the industry and it was no real surprise that when they split in 1985 that he’d get a number of offers and in 1987 his new band released Unusual Places To Die, a tremendous debut album, on Go Discs only to find that those who had most backed his talents had left the label and the record floundered.

Three years later, the band were on Island Records and history repeated itself as Sweet Deceit flopped despite all sorts of press acclaim.

There then followed a period on which Chris Thompson joined forces with Neil Clark and Stephen Irvine (ex-Commotions) and Mark Bedford of Madness to write and release material under the band name Bloomsday and it was 1994 before The Bathers third album – Lagoon Blues – came out via German based Marina Records with further releases in 1995 and 1977 in the shape of Sunpowder and Kelvingrove Baby.

By now, the music was heavily reliant on lush arrangements and the use of strings, brass and keyboards rather than the guitar focussed work of the earlier material with a range of guest vocalists including most notably Elizabeth Fraser of Cocteau Twins.

By 1999, Thompson was regarded by many as one of Scotland’s greatest unknown talents His quality and diversity of work was winning small numbers of new admirers with every release including the sixth Bathers album, Pandemonia, which came out that year on Wrasse Records.

There was a demand for some sort of career perspective but the problem however, due in part to his continuous shifting around labels, and also that most of his records were only ever released in small quantities and went quickly out-of-print, that doing something along those lines wasn’t an easy task.  The solution lay in the release of Desire Regained in which twenty tracks spanning the career of The Bathers were re-recorded and brought together on one release back in late 2001.

It remains, to the best of my knowledge, the last release by the band although they have never formally broken up.

Formed in 1992 in the town of Stewarton by a group of school mates, Baby Chaos consisted of Chris Gordon (vocals/guitar), Grant McFarlane (guitar), Bobby Dunn (bass) and Davy Greenwood (drums).  They were discovered by former Happy Mondays turned A&R man, Nathan McGough and after an appearance on a BBC 2 music programme were signed to East West with debut single ‘Sperm’ being released in late 1993.

Three more singles and an LP followed over the course of 1994, a year which saw them play the inaugural ‘T In The Park’ as well as at the week-long Sound In The City event in Glasgow (which is where I saw them for the first and only time).

They were described by some as Scotland’s answer to the sound of post-Seattle grunge and were compared by others to Manic Street Preachers.  They never quite got a distinctive enough sound of their own to stand out.  Perhaps the best indication that they wouldn’t get much of a local following was when they were briefly championed by Kerrang magazine at a time when Glasgow really didn’t have all that much of a hard rock scene.  Tell you what though, their hometown isn’t all that far from where Biffy Clyro have their roots.  Perhaps Baby Chaos were just a decade or so too early. Not the sort of stuff normally featured on TVV but it’s a CD single that sites on the shelf.  One that I paid 25p for…

Read more about The Bathers here