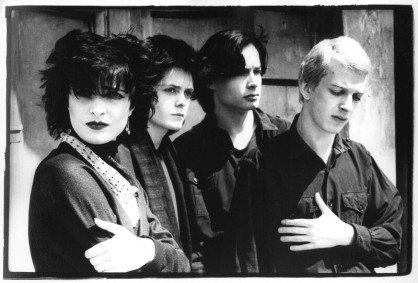 Your first single is a top 10 hit, which song will you choose to be the opening track on your first album? Well this is 1978 and you are a punk band, so obviously it’s not going to be the hit single, no it’s a short slow wordless mournful piece that has very little in common with the rest of the album, but does a great job of establishing that the album ‘The Scream’ was not going to be an easy listen and provides the perfect opener for this ICA.

The ‘Pop Song’ as Siouxsie described it during the ‘Join Hands’ tour, was my first and most people’s exposure to the band. At the time, unless you were a John Peel listener and at that time I was too young to stay awake during school nights, Top of the Pops was the way to hear and see new bands and it was on this show that I first heard and saw the band, compared to what was to follow it was ‘poppy’ but in comparison to the rest of the tv show weird and aggressive, according to Wiki it reached number 7 in the chart, only bettered by their cover of Dear Prudence some 5 years later, so Siouxsie was right to call it ‘Pop Song’

Their 3rd single, manages to make children playing/playgrounds a sinister experience. I remember at the time John Lydon ( billed as Johnny Rotten) was appearing on Juke Box Jury and Playground Twist was one of the singles reviewed and he ducked it by saying the audience should decide whether it was a hit or miss. I found the show on Youtube last week and it is from a different world, alongside Rotten were Alan Freeman (fair enough), Elaine Paige (West End musical singer) and Joan Collins (who at the time was starring in soft porn movies like The Stud) reviewing the latest new singles, the most shocking aspect is seeing both Rotten and Freeman smoking on screen, it is well worth a watch.

A track from their 4th Album JuJu which is probably my overall favourite and for me this is the standout track. John McGeoch’s guitar playing is perfection combining a lovely riff with intricate note playing. He was a perfect replacement for the Banshees, managing to maintain their aggressive guitar led sound whilst adding a new layer of delicacy, subsequent guitarists never quite managed to achieve this balance,

From their 3rd album, recorded following the abrupt department of John McKay (guitar) and Kenny Morris (drums) during the Join Hands tour, and features guitar on this song from non-other than Steve Jones (Sex Pistols), although to be honest you wouldn’t know it from the playing. Siouxsie’s vocal is a vicious condemnation of the use of animal fur for clothing opening with ‘Mink, seal and ermine smother fat women’

From A Kiss In A Dreamhouse and the album where, for me, were the guitars become less dominant and Siouxsie starts to sound like a regular singer. I always thought the song was about Siouxsie herself, but apparently it’s about The Painted Bird  – a 1965 novel by Jerzy Kosiński which doesn’t sound too pleasant a read.

A great example of a band taking a song and making it their own, it fits seamlessly into the Banshees sound and closes the first side of The Scream. I didn’t know it was a cover until I read the songwriting credits (from the days when you would pore over every detail of a record and its sleeve) and to be honest I have never heard the original to this day and don’t want to, in my mind it will always be a Banshees song.

A constant reminder that Budgie is probably the most powerful drummer I have experienced live, I can still feel the vibrations through the wooden floor of the De Montford Hall in Leicester as he pounded away.

Do you notice my eyes, are they in the right place?
There’s a Mantovani backdrop to pucker up a tummy tuck
A voice soft as lint mashed up with shades of pink
Hide your genetics under drastic cosmetics

After the Banshees split up, The Creatures appeared with just Siouxsie and Budgie as members. This is the most Banshee song they recorded and is magnificent and is the only song I know on this subject matter and one that Siouxsie attacks with pure vengeance.

16 thoughts on “AN IMAGINARY COMPILATION ALBUM : #258: SIOUXSIE AND THE BANSHEES”