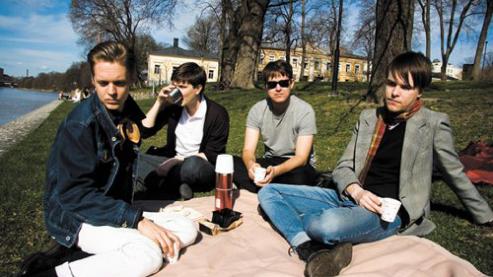 I’m going to let someone else tell you why Cats on Fire were such a wonderful band.  This appeared in the Guardian newspaper back on 4 May 2012, and was penned by Neil Kulkarni.

“A wet Wednesday night in London, and a handbag is repeatedly hitting us in the face. We don’t care, because we’re dancing – as is the handbagger – to the best pop music being made on the planet right now. The crew responsible for ramming out the steaming Bull and Gate is Finland’s fantastic Cats on Fire, fondly loved in Europe yet virtually unknown in the UK, where they have difficulty even getting their records released.

That’s odd, considering the three albums they’ve given us since 2007 do nothing less than reinject possibilities, politics, wit, erudition and joy into guitar pop. We’re not just here, nose-to-nipple, because we love Cats on Fire, or because they also happen to be the best-looking band on Earth. We’re here because 2007’s The Province Complains contained I Am the White Mantled King, one of the greatest songs of this millennium; because 2009’s Our Temperance Movement was the most pristinely perfect pop album seemingly no one but us ever heard; because this year’s All Blackshirts to Me is, impossibly, even better. Cats on Fire are sleeping on someone’s floor tonight. By rights, it should be the Queen’s; by rights, as everyone here knows, they should be stars.

“I don’t love music more than anything else,” admits the lead singer and songwriter Mattias Bjorkas, “which means I haven’t been blinded by the love of music. And I have certainly not been blinded by money. I was a very straight-edge, socialist youth – Cats on Fire has been my lesson in frustration and dealing with second-bests sometimes, but we try to always make the music move on and matter.“

The five-piece has come together in fits and starts from the small, isolated town of Vaasa, sharpening and solidifying their magic every step of the way. “No music industry tentacles were long enough to reach as far up north as we were in Vaasa,” Bkorkas says. “But trying to be loved was always my main preoccupation, whatever political or musical ideas I may have presented as the true spirit of Cats on Fire. I nurtured the idea of a small, provincial army that was musically righteous and ready to strike against the trendy, metropolitan hypocrisy.”

They make songs you can’t shake and write lyrics that stop your day in its tracks, the sound exquisitely puckered throughout by Ville Hopponen‘s addictive licks, Iiris Viljanen‘s poptastic keyboards, and the band’s sheer stealth and grace. The last time you felt this way about indie-pop was Pulp. Yeah – that good. Judging by tonight’s rapturous reception, it’s only their own shyness that’s stopping Cats on Fire becoming major stars.

“In big cities,” Bjorkas says, “we observe all the other groups of four or five people with good haircuts, unable to shake the worst thought of all – that each of these 10,000 bands had an idea as valid as our own.”

They don’t. Not by a long chalk. All Blackshirts To Me is European album of the year. Avail yourselves immediately.”

Sadly, it would be the last album the band would release. Across the three LPs and various singles and EPs (many of which were collated on the compilation Dealing In Antiques, released in 2010), there are more than 50 songs from which to narrow things down to as perfect an ICA as I can deliver. It’s 12 songs long, on the grounds that it deserves to be.

3. Letters From A Voyage To Sweden (track 3 on Our Temperance Movement, 2009)

8 thoughts on “AN IMAGINARY COMPILATION ALBUM : #314: CATS ON FIRE”