Today’s is a real heartbreaker of a number. So you better get ready now…

Bloomsday was a short-lived project. It came about in 1990 when Chris Thomson (ex Friends Again) joined forces with Steven Irvine and Neil Clark who were both without an output for their musical talents after Lloyd Cole had chosen to go solo.

There was one fantastic upbeat pop single called Strange Honey, followed by a majestically moody album called Fortuny.  There’s not a great deal of commercial sounding music on the record – and those songs which are of that ilk have dated a bit – but there’s other deeper, darker and intense numbers that even nowadays more than 25 years on still have the ability to astound with every listen.  Like this.

The Boatman’s Call would see Nick Cave make a whole album out of being torn asunder by failed relationships and it being held up as a modern masterpiece.  None of his songs however, come close to capturing just how hard it is to cope when your one true love leaves you behind…….and the despair of coming to forlornly rely on hope.

Not an easy listen.  But trust me on it……

PS : The double bass on this song is played by none other than Mark Bedford of Madness….

Consisting of Big John Duncan (ex-Exploited), John Carmichael and Colin McGuire, their debut EP on a local indie lable attracted the interest of Virgin Records.  Their career consisted of two singles, including a frantic cover of a song by Prince, and one LP, none of which got near the charts.  Big John would later be part of the live act that was Nirvana…..

Chris Thompson is one of the great lesser-known talents of the Scottish music scene.  He first came to attention via Friends Again and has made a number of very different albums under the guise of The Bathers.

Back in 1990, he took time to form Bloomsday.  This was a very talented group indeed.  As well as Chris, you’d find Neil Clark on guitars and Stephen Irvine on drums – both had been part of Lloyd Cole & the Commotions.  All songs on the one LP the band released in 1990 – Fortuny – are joint compositions. Oh and for good measure, the bassist on all the records was Mark Bedford of Madness.

It’s a very fine record, albeit parts of it have dated a wee bit.  One day I’ll get round to featuring it on this blog.  In the meantime here’s the one 7″ they released. It was on a major label too – Island Records:- 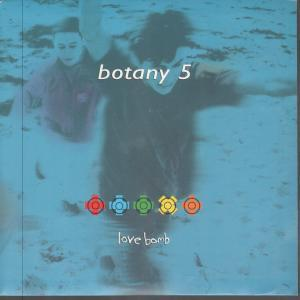 Botany 5. consisting of Gordon Kerr, Steve Christie and Jason Robertson entered into the studio with the Blue Nile’s Callum Malcolm. The resulting ‘Into The Night’ (1991) was preceded by two well-received singles, ‘Love Bomb’ and ‘Nature Boy’, the group’s mellow meditative soundscapes bearing comparisons with the likes of Talk Talk, The Orb and Animal Nightlife. Before being lost forever to the music business jungle, the Botany 5 trio completed a series of acclaimed live shows aided and abetted by former Orange Juice drummer Zeke Manyika

Click here for one of the most lovingly put together websites on t’internet.  You can read more about Bourgie Bourgie and everything else that Paul Quinn has ever been involved in here

Readers of old will know just that (25) remains one of my all time favourite pieces of music.