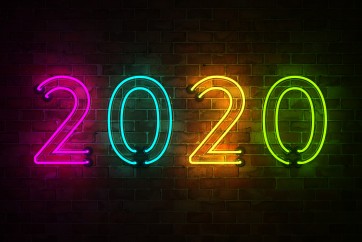 Aside, that is, from the bonus post I shoved up on a whim to celebrate the release of Weirdo by Carla J Easton.

I am very conscious that the strength of this particular blog is that it has an almost exclusively retro feel, but there is sometimes a need to draw attention to contemporary music.  So, here are two videos for singles lifted from albums I’ve really enjoyed this year.

Neither are new bands.

Dream Wife, a London-based trio consisting of Rakel Mjöll (lead vocals), Alice Go (guitar, vocals), and Bella Podpadec (bass, vocals) have been together since 2016. Their eponymous debut album, released in 2018, was a frantically fabulous mix of punk, indie, and pop, and I’m delighted to much report that it is much the same on the 2020 follow-up So When You Gonna….

I’m told they are an explosive live act, akin to the sorts of shows the bands you would enjoy from the bands who were lumped under the Riot Grrrl ‘movement’ in the early 90s.  I was busy at the football last year when they turned up for a day long festival in Glasgow and so had been hoping to catch them this time around, but COVID-19 has put those plans to one side. All being well, they are due in Glasgow next April and I’ve a couple of tickets on order.

Hinds have been around for even longer, forming in Madrid back in 2011 (initially as Deers before being forced, via legal action, to change their name).  Another all-female line-up with Carlotta Cosials (vocals, guitar), Ana Perrote (vocals, guitar), Ade Martin (bass, backing vocals) and Amber Grimbergen (drums). Their first studio album, Leave Me Alone, appeared in the shops in January 2016, and its follow-up I Don’t Run, was released in April 2018.  Aldo and Comrade Colin are among those who have been raving about Hinds for a number of years and it has been remiss of me not to have featured them before now.

Hinds are less obviously confrontational and punky than Dream Wide with the music occasionally veering into the charming territory of The Modern Lovers, and at other times the spiky and punchy material of early Libertines seems to be a close cousin, especially on the first two albums. There’s other times they remind of early We’ve Got A Fuzzbox….., probably from the way the harmonies pan out as Carlotta and Ana share lead vocal duties.

The new record, however, leans much more towards pop, recorded in New York with producer Jennifer Decilveo, who has worked with Bat for Lashes, and The Wombats among others. It’s a short album – its ten tracks take under 33 minutes to listen to – and is packed with all sorts of hooks, riffs and melodies that stick with you.  It’s certainly been on heavy rotation in Villain Towers in this strange summer of 2020.

Here’s a couple of the older songs, both of which were released as singles

Finally, here’s one that Hinds did, initially as a song for a flexidisc for a limited edition version of the new album, but has since been made available in digital form.

My only legitimate excuse is that I spend so much faffing about on here sorting out so much old music that I naturally will miss out on all that’s fresh and good.

About four weeks ago, I had thought 2018 had been a quiet year for decent music, based on how little I had actually purchased.  As ever, I did hang off getting hold of everything as there always needs to be a list given to Mrs Villain  for Christmas and the 5 albums of booty from that were duly received.  But having compiled said list from stuff that I knew, I found myself reading a few of the end of year round ups (especially those over at The Sound Of Being OK) at which point I realised just how much I missed out on.  There was a post-Xmas trip to Fopp Records in Glasgow with the intention to pick up a few things and I ended spending an absolute fortune.

I’m now ploughing my way through everything and the idea of this short and occasional series will be to highlight those bands that I’m ashamed to have neglected previously.

I’m starting with Dream Wife whose self-titled debut album was released as far back as January 2018….and I’m completely at a loss as to how I missed out.

TSOBO said this about them:-

At the end of last year (2017) I was about to proclaim that guitar music was dead. Stone Cold Dead. Last year there were about two good records made by guitar bands, about seven by bands with keyboards and about twenty by rappers. This year that trend appears to have reversed itself and right at the start of the year Dream Wife exploded into our lives.

In January Dream Wife dropped their self titled debut album and it made those short dark evenings, those dreary rain sodden evenings just absolutely fly by. They were cool, they were exciting and almost singlehandedly they injected some adrenaline into the veins of guitar music.

The thing about Dream Wife is that the three of them are best friends, and when they recorded this album they sound like they are having the times of their absolute lives. The fact that they are making songs that amazing just adds to the brilliance of it.

I’m going to go with a slightly obvious comparison here, but you will need to close your eyes and cast your mind back. Remember the first time you heard ‘Cannonball’ by The Breeders. Remember how your hairs on your arm stood up and you asked yourself ‘what the hell was that?’ and then spent the rest of the day playing it to absolute death. You remember that. Well that’s what I felt like when I heard ‘Hey Heartbreaker’ by Dream Wife. Even though it contains handclaps.

Dream Wife take all the best bits of timeless indie pop, throw in some attitude lifted almost directly from the days of L7 or Bikini Kill add a bit of colour and then sprinkle brilliance over the top of it. The end result is utterly brilliant.

I listened to the three songs accompanying the review and was blown away.  It was that record alone that led to me making the trip into Fopp and I was stunned to find that copies of the album, on vinyl, were down to £10. It has proved to be the best bargain I’ve had in decades.

Dream Wife is an astounding record. In addition to the bands referenced in the TSOBO review you can add Yeah Yeah Yeahs, Le Tigre, Blondie, Kenickie and Elastica as influences while having bringing a passion and energy that had me harking back to the new wave era of my late teens and early 20s.  They’ve also written what surely is the anthem for the #metoo movement:-

Like most ‘new’ bands, there loads of stuff to look at over at Vevo and You Tube, including plenty of live clips which provide evidence that the trio (plus male drummer) can rock with the best of them.  Seek them out and enjoy.