A GUEST POSTING FROM BRIAN
http://lineartrackinglives.blogspot.co.uk/ 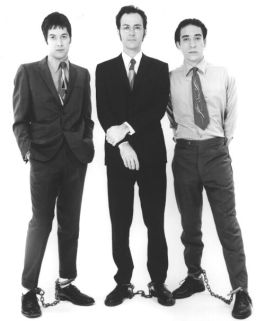 I do love the fact the ICA series has proven to be so popular.  I am especially pleased that so many of you take the time to submit guest postings that, in many cases allow singers and bands never previously featured on TVV to be the focus of attention.

The idea is normally to have one ICA per week so that enough attention can be devoted to each post – I know that some readers do drop in every day and it’s no hassle to read and hopefully enjoy a long and detailed posting, but many others are occasional visitors and to see screeds of type can be off-putting. leading to a quick scan of things and perhaps missing out on some great posts simply because the band wasn’t known to them or was of little interest. (I say that with some confidence as it is something I can be guilty of myself when time is tight).

The thing is, I’ve had a great run of e-mails with suggested ICAs that to hold them to one per week would mean some folk not seeing their efforts on the screen for a long while yet. I don’t think that’s a good way to treat anyone and so, with your indulgence, the rest of this week is going to be dedicated solely to ICAs….all, of which are fantastically and lovingly written in ways that will educate and entertain in equal measure.

First up is Brian from Linear Track Lives with yet another quality look at a band, I have to be honest, completely passed me by.  It’s also appropriate that he name checks Jonny the Friendly Lawyer as this post will appear a matter of hours after I meet him for the first ever time at his gig in Manchester (an event I will turn into a post as soon as time allows….it’s all a bit manic just now with work and folk also over visiting from Canada….not to mention gearing up for early May when there’s the bloggers get-together in Glasgow).

When you think of Los Angeles, what’s the music scene that pops into your head? Is it the punk movement of the late ’70s and early ’80s? How about the Paisley Underground? For me, it’s ’90s power pop. Now, power pop has had a rich history in the City of Angels for more that 40 years, from The Nerves and its many offshoots to Tulsa transplants 20/20 and the Dwight Twilley Band, to name but a few, but there were two bands from near the end of the century I liked better than the genre’s giants. I’ll get to the other one next time, but let’s begin with The Sugarplastic.

I have featured this trio on my blog many times, and the reception has generally been tepid, but I’m a stubborn sod. Two recent developments inspired me to be a Sugarplastic disciple once more. On Sundays, JC is taking us through the singles of XTC, a band you’re bound to think of while listening to this ICA. I also discovered quite inadvertently through the comments section of my blog that our friend Johnny the Friendly Lawyer/Johnny Bottoms is a big fan. Finally, after nearly eight years of pushing the Sugarplastic, I have found a comrade. I swear I heard angels singing.

Like so many bands that have received the ICA treatment, I could easily focus on the early years and give you the Sugarplastic’s best work, but I have decided to go for a comprehensive listen.

All those hours practicing at the appliance store owned by the father of drummer Josh Laner paid off. The band’s first release came out on Los Angeles-based Pronto Records in 1993, and it was quite an introduction. The label went all out and created a box set of three 7″ singles at a time when vinyl had all but disappeared. Johnny the Friendly Lawyer commented “the first compilation tape I made for my son… had ‘Ottawa Bonesaw’ on it. Every kid loves that tune.”

The Sugarplastic had three songs on Pronto’s 1993 compilation ‘Meg: An L.A. Sampler.’ This song never showed up anywhere else. The band’s next two singles would be released with little fanfare on Small-Fi and Minty Fresh. The Sugarplastic didn’t stand a chance. The Chicago label was busy pushing the popular Veruca Salt at the time.

The title track from their 1995 album and first long player, this time on Sugar Fix Recordings. While the fellas were in the studio, Geffen came sniffing around. A deal was struck, but the Sugarplastic agreed on the condition ‘Radio Jejune’ would come out on Sugar Fix before they would begin recording for the major label. Here’s where Ben Eshbach really began to blossom as a writer. His songs had more hooks than an old man’s fishing hat, and folks outside of L.A. began taking notice.

By ‘Radio Jejune,’ it was obvious XTC (particularly album ‘Drums and Wires’) was a huge influence. As a fan, I didn’t take this as a negative. I always thought it meant clever lyrics and a herky-jerky, tension-filled delivery, but as more listeners were exposed to the Sugarplastic, the derivative label began rearing its ugly head. Instead of running the other way, Ben had fun with it. “Life Begins at the Hop,” anyone? How’s this for a cheeky lyric: “Sit back and watch me crack, what Mr. Moulding’s done before.” I chose “Arizona” because of the XTC connection, but any song on ‘Radio Jejune’ could have shown up on this ICA. It’s an essential album.

Now signed to a major, fortune and fame followed. Uh, maybe not. The Geffen era was one album, ‘Bang, the Earth is Round,’ but what a great album it was! “Polly Brown,” an old song from the “Ottawa Bonesaw” box set, was shined up and released as a single that went nowhere. To give you a little perspective, “Macarena” was the top song of 1996 on Billboard.

“Sheep” was a forgotten single from 1993 that found its way onto the Geffen album. It has a lyric I have always loved: “I’ve sired now I’m tired and I want to go to sleep.” The additional vocals from Gretchen Parlato worked really well. Parlato has gone on to have a quite a career as a jazz vocalist.

Sugarplastic Central became quiet for four long years. During that time, Laner left the band and was replaced by David Cunningham. In 2000, Craig McCracken, creator of animated series The Powderpuff Girls released ‘Heroes & Villains,’ a compilation of songs inspired by the show. McCracken said these bands inspired his own work, and a quick look at the roster revealed I wanted to be friends with this guy. Devo, Bis, Frank Black, Apples in Stereo, Komeda and many other greats participated. This is the Sugarplastic’s contribution.

Another album, another label. ‘Resin’ came out on Escape Artist Recordings in 2000. Andy Metcalfe of Squeeze and the Soft Boys produced. The songs were quirkier than ever, but there were ever-so subtle changes in sound. The comparisons to XTC faded.

In 2003, after three more years of quiet, Tallboy Records out of San Francisco made a major announcement. The Sugarplastic would release seven 7″ singles, about one every three months, via subscription. I was subscriber No. 63 of 300 available slots, and all of my singles were numbered as such. The sleeves and colored vinyl can only be described as art. One side of each single was penned by principal writer Eshbach. In a rare move, bassist Kiara Geller wrote the songs for the other side. “Hey Mr. Lockjaw” was my favorite of Geller’s contributions.

I never heard or read a definitive pronouncement the Sugarplastic had called it a day, but it has been 12 years since their last album. I’m beginning to lose hope. If ‘Will’ really was the end, though, I can accept it, but I still check the Tallboy site from time to time with hopes of some news.

This is a short song (1:49) from the “Ottawa Bonesaw” box set in 1993. It also appeared on the Japanese import of early works called ‘Primitive Plastic: Demos and B-Sides’ from 2001. Like so many underappreciated bands from the West, the Japanese got the Sugarplastic. Of course they did! Eshbach wrote in the liner notes of ‘Primitive Plastic:’ “Some [of these songs] are unfinished – all of them are a little embarrassing – but Josh, Kiara and I secretly love every one of them. Dover, in fact, is my favorite Sugarplastic recording of all time.”

See that comment I signed off with recently when Nik wrote about YMO?? Same applies this week….only this time I knew nothing of this band…not even their name!

I particularly love Brian’s attention to the smallest of details such as sharing with us he was subscriber #63. His love for, and knowledge of, the most obscure of bands, never ceases to amaze me. Can’t wait to see him again next month.