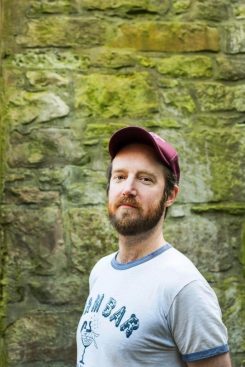 Rick Anthony (born 11 February 1979) is a Scottish musician, singer and songwriter originally from Aberdeenshire and now based in Glasgow. He is the lead singer and guitarist in the alternative rock band The Phantom Band and also performs as a solo act and releases music under the pseudonym Rick Redbeard.

Anthony began performing solo shows sometime in the mid-2000s, assuming the name Rick Redbeard due partly to its pirate connotations. A notable show during this early period was an appearance at the 2007 Connect Music Festival on the Yoursound Bandstand alongside other emerging Scottish acts such as Frightened Rabbit and The Twilight Sad. His music is generally categorised as alternative country or alternative folk music and has been likened in sound to Leonard Cohen, Bill Callahan and Will Oldham among others.

As The Phantom Band gained popularity after the release of their debut album Checkmate Savage in 2009, his solo work remained in the background until June 2012 when Anthony released the track ‘Now We’re Dancing’ as a split 7” single Now We’re Dancing/Vanishing Tanks with Adam Stafford on the Gerry Loves Records micro-label in Edinburgh. This was the first release of any kind under the Rick Redbeard name and was followed by a small joint headline tour of Scotland.

In January 2013 Chemikal Underground records released the debut Rick Redbeard album No Selfish Heart. This release was followed by a headline tour of the UK in March including sold out shows in Aberdeen’s Peacock Visual Arts Centre and Glasgow’s Centre for Contemporary Arts.

In July 2014, shortly after the release of The Phantom Band’s third record Strange Friend, Kingfisher Bluez, a Vancouver-based micro-label, released a 7″ Rick Redbeard single Dreams of the Trees featuring the title track and two other previously unreleased songs.

In 2015, Anthony recorded music for the short documentary The Third Dad which premiered at the Edinburgh International Film Festival in 2015.

In April 2016, the release of a compilation album called Refugee was announced. Organised by Glasgow-based musician Robin Adams and inspired by the ongoing refugee crisis in the Mediterranean, the record will be released in June 2016 with proceeds from the sale going to the Migrant Offshore Aid Station in Malta. It features a previously unreleased Rick Redbeard song called ‘Postcards’ along with new material from Bonnie ‘Prince’ Billy, Alasdair Roberts, Linda Thompson and others.

The second Rick Redbeard album Awake Unto was released by Chemikal Underground records on 17 June 2016.

As mentioned a while back when this series featured The Phantom Band, I’m really not sure if they are still an entity, While I don’t think there’s ever been any formal announcement of a break-up, the official website is no longer active.

I am, however, able to point you in the direction of a bandcamp site for Rick Redbeard, one in which you can listen to and pick up some of his earliest and later songs.

This is from the Awake Unto album:-

mp3: Rick Redbeard – The Night Is All Yours

While this is from the split single with Adam Stafford back in 2012 (and later made available on the album No Selfish Heart):-

Here’s hoping, with live music finally making a comeback, that Rick will get the opportunity to play a few shows, as I’ve always enjoyed going along to see and listen to him. He has a wonderful voice. 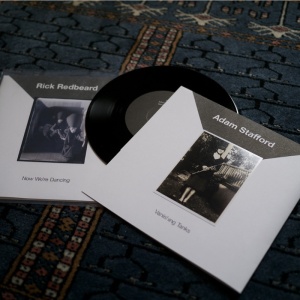 This is the single which should have featured last week but I had filed it away in the wrong place and didn’t have time to find it in time.

It was released in June 1992 on a small Edinburgh based label called Gerry Loves Records. It has a song on one side by Rick Redbeard and a song on the other side by Adam Stafford.

It was my favourite single of 2012 but I never ever featured it on the old blog. The simple reason is that the single was released only on vinyl (and mostly by mail order) in a very small quantity – 300 in total – and despite it being utterly brilliant it never quite sold out and while that was the case I never wanted to make the songs available.

But it’s now just shy of two years since the single was released and I’m guessing that anyone who was desperate to get a copy will have one by now.

I know these won’t be everybody’s cup of Darjeeling but I am incredibly fond of both songs and indeed just about all of the output these two unique and very talented artists have released over the years.

I mentioned a couple of weeks pack in my apology posting that I had been to a number of great gigs and events this year but had been too lazy/tired to write about them.  One such event was The Duke Street Expo at which Rick and Adam both performed.  Here’s the full details of the line-up that Saturday afternoon and evening:-

While here’s a review from one of Scotland’s leading broadsheet newspapers:-

The Commonwealth-funded East End Social continued to shine a light on a neglected area of Glasgow with its most ambitious and community-spirited event to date – a seamless (and sunny) all-day festival of live music, comprising two ticketed gigs in churches plus a steady stream of free pop-up performances in unlikely venues along a bustling strip of Duke Street.

Roll up for acoustic troubadours in ladies’ boutiques, easy jazz listening in charity shops and shape note singing, guitar and vocal loops and complimentary pakora on the patio of an Indian restaurant. “I’ve never seen the street this busy,” commented one impressed local.

Admiral Fallow were the headline draw here, but frontman Louis Abbott and co-vocalist Sarah Hayes also performed more intimate solo shows, the latter delivering a suitably fragrant set of folk covers in the local florists – with a single red rose across her keyboard.

As the afternoon wore on, the music got louder and the bijou venues got busier and sweatier. There was risk of a spritz or even a close shave when David McGregor of Kid Canaveral packed them in around the customers at Urban Funk gentleman’s barber shop. Meals were passed over the heads of the crowd at Dennistoun Bar-B-Que as hip-hoppers Hector Bizerk drummed up some festival spirit. Thankfully, the tattooists at Electric Artz were safely wielding their needles in the back room while punk power trio Ex-Wives played the most thunderous set of the day.

King Cresote had all but knackered his vocal cords singing in the pub earlier, but with a bit of echo applied to the upper  notes, he sounded his usual affecting self, rounding off this grand day out with a ramshackle, but lovable, set encompassing old and new songs, some mischievous baiting of the Yes vote and a self-styled cabaret foray into the crowd.

I’m lucky enough to be helping to deliver the East End Social through what I do in my daytime job and I can honestly say I haven’t had as much fun at a music event in years as I did on that day. I wasn’t alone….have a look at what was said across Twitter as things unfolded.

Loads of great photos too…..I can be spotted in the one of Adam Stafford performing in the patio of the Indian Restuarant….the fat, baldy bloke in blue and white hooped indie style t-shirt!!